Trending
You are at:Home»Entertainment»Movies»Movie Review: “Thor: Love and Thunder” 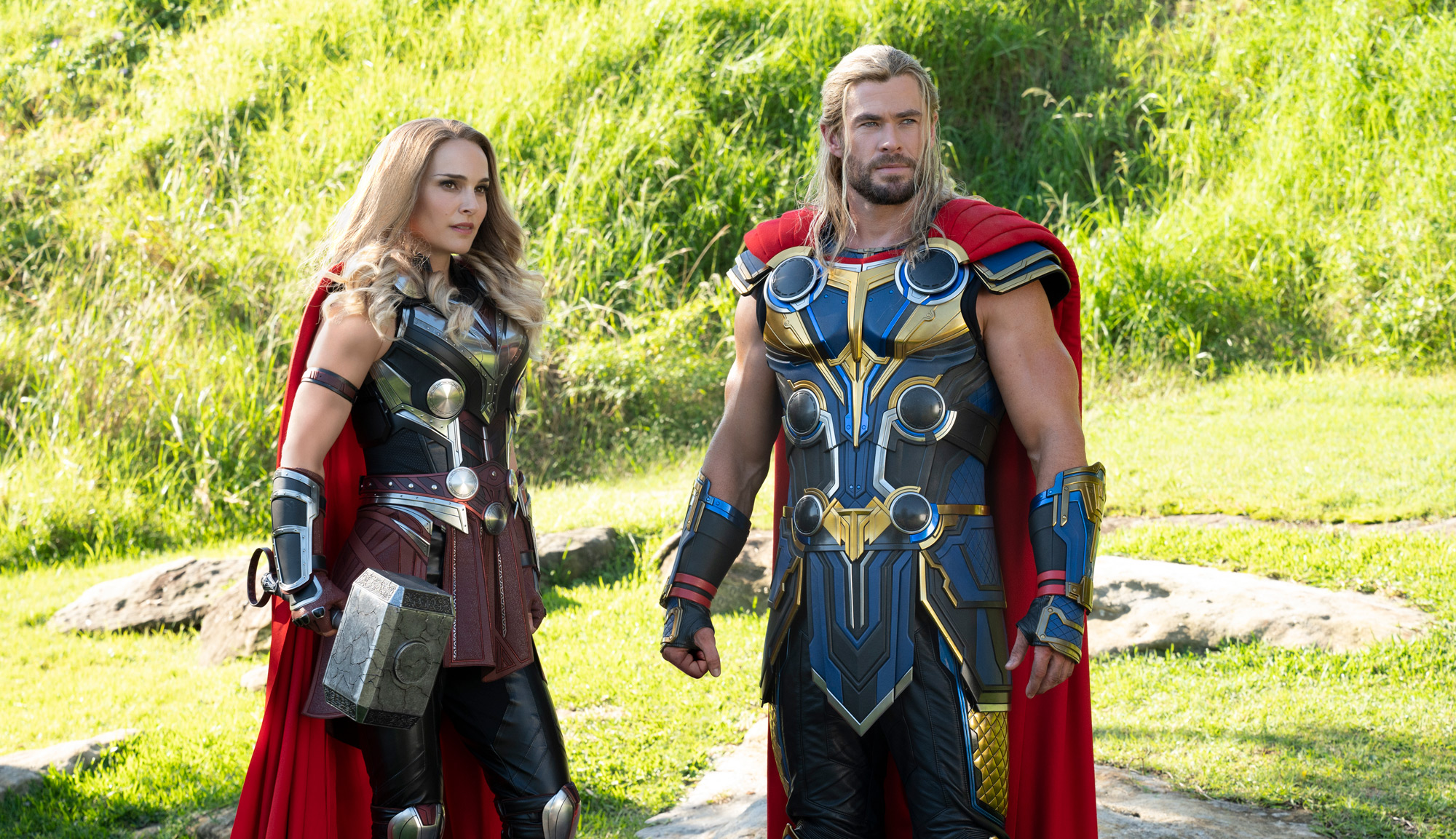 A cinematic assault on the senses can be an invigorating experience, especially when implemented by a talented filmmaker. “Everything Everywhere All at Once,” “Mind Game” and “Fear and Loathing in Las Vegas” are just a few examples of an artist packing each frame with a multitude of themes, visuals, sounds, story and more that envelopes audiences in a tidal wave of overstimulation. However, if not handled properly, the movie can turn out rushed and overstuffed — its lack of focus undercutting its valiant attempts at saying so much. “Thor: Love and Thunder” isn’t a bad film. In fact, most of it is exceptionally entertaining, with strong humor, genuine emotions and some stellar imagery. But there is a sense of ping-ponging between too many places and too many big ideas that it creates a sense of tonal whiplash between various sequences. It’s always preferable for an artist to try too much rather than play it safe, but director Taika Waititi’s commendable attempt at assaulting viewers’ senses comes up short and leaves an awkward film behind.

Following the events of “Avengers: Endgame,” Thor (Chris Hemsworth) has been adventuring around the cosmos with the Guardians of the Galaxy. He never truly belonged with the ragtag crew, however, so he seeks out a new quest alongside his friend Korg (Waititi) to locate and stop a villainous threat named Gorr the God Butcher (Christian Bale). That path leads him back to Earth and New Asgard, where he’s met by his old friend Valkyrie (Tessa Thompson) and a new Asgardian protector, The Mighty Thor, who turns out to be his old flame Jane Foster (Natalie Portman) wielding Mjolnir. Together, Thor, Jane, Valkyrie and Korg set off to stop Gorr from killing any more deities, all while the God of Thunder contends with his uncertain place in the universe.

“Thor: Love and Thunder” was written by Waititi and Jennifer Kaytin Robinson, based heavily on multiple arcs in the comics by Jason Aaron. As noted, it’s not a bad film, with its constant, rapid pace making it hard to even distinguish many flaws as it careens from action set piece to comedy sequence, all to the sounds of Guns N’ Roses. But going from planet to planet, dealing with different themes or plot elements in each new scene, subconsciously informs your brain that a lot is happening. Even when the narrative is straightforward, bouncing between so many distinct locations and topics forces your mind to reset each time, like how your brain adjusts whenever you walk through a doorway. It’s an odd psychological event, but it’s very much felt in “Thor: Love and Thunder” because the various steps aren’t delivered in montage form but rather in multiple mini-scenes.

Waititi’s penchant for combining sincerity with silliness is also hit-or-miss, though it’s an admirable trait that shows that wonderment can have a melancholic streak or that the direst of circumstances shouldn’t be beyond a witty joke. That is, after all, how life works for the most part. There are some scenes where this one-two punch works fantastically and authentically, but there are others where it becomes too much disparity in too short of a time, diluting the drama and making the comedy feel awkward and forced. This is a byproduct of trying to cover too much in too short of a time, as a more streamlined story or better curated emotional themes wouldn’t necessitate so many discordant moments.

And yet it cannot be denied just how exhilarating “Thor: Love and Thunder” is to experience. Beyond the spectacle of battles and cosmic gods, powered by the bombastic voice of Axl Rose, there are sublimely hilarious parts and genuine aspects that hit home with their emotional honesty. Hemsworth, Portman and Thompson do stellar work as essentially three variations on the same character: an adventurer who slaps on a brave face while fear and sadness quietly gnaw away at them. They aren’t nuanced portrayals, nor should they be as these are mythic characters, but it always feels authentic and drawn from a real place. Bale is a sympathetic enemy, seeking to punish the gods that let him suffer, and he is genuinely creepy in his movements and manner. It isn’t as strong of a presence as Tom Hiddleston’s Loki or Cate Blanchett’s Hela, but it also takes more of a backseat to the internal struggles of our heroes.

Additionally, when the comedy works, which is more often than not, it is tremendous. There is one running gag set up early on that should get tired by the halfway point but legitimately stays funny all the way to the end. New Asgard becoming a tourist destination, Korg’s peculiar style of narration and Thor’s attempts at inspirational speeches are all wells that provide lots of laughter. That willingness to lean into the silly is obvious with these grandiose figures who are eternal yet forever out of time, but it doesn’t do so at the detriment of the film’s emotional stakes. The action isn’t innovative (a seemingly perennial critique of MCU movies), but what it lacks in inventiveness it makes up for in enthusiasm and contagious excitement.

Starting around the early 2000s, Marvel comics utilized a technique called “decompression” in their storytelling. An issue would now cover an hour or a day in the narrative and would be more contained to a specific character or thematic point. Previously, Marvel heroes could go from the west coast to a whole new dimension and fight multiple armies along the way at a fast clip. There are strengths and weaknesses to both, with the slower, more focused approach being terrific for reading at once as opposed to the more exciting monthly installments of the previous model. “Thor: Love and Thunder” is a terrific simulation of those earlier comics where new concepts and characters were introduced page after page in a graphic sensory assault, making it hard not to get swept up in all the colors, bluster and constant changes. But by pursuing that path, there’s a feeling that certain elements are being given shorter shrift than they should, and that not enough time is provided for events to land with viewers. “Thor: Love and Thunder” is a fun movie with lots of great sequences and dialogue that folks will revisit and quote many times afterward, but there’s a sense that Waititi’s ambitions got in the way of a more powerful version of this story.