Trending
You are at:Home»Vices»Drink of the Week: The Toronto 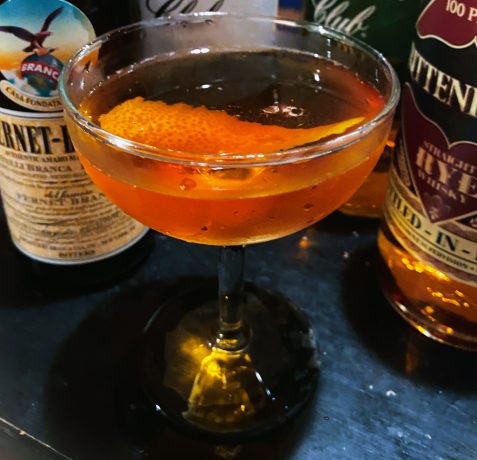 I gather that relatively few Torontonians have tried the Toronto. That’s a shame — unless they hate bitter flavors, in which case it’s not for them. However, it is for me and it might be for you.

We are told that the Toronto began life as the Fernet Cocktail. We are also told that it once may have featured a much larger proportion of Fernet Branca, the infamously hairy-chested amaro favored by Alfred Pennyworth and bartenders everywhere. The original recipe, published in the early 1920s, reportedly mentioned that the tough guy digestif was popular in Toronto….except that Prohibition had reached Ontario by then so the reports may have been out of date. The drink turned up under its current name in David Embury’s 1948 The Fine Art of Mixing Drinks, making its rediscovery inevitable and we’re better off for it.

Combine all of the liquid ingredients in a cocktail shaker with lots of ice and stir very well. Strain into a chilled cocktail glass and twist your citrus over the drink. Instead of dropping an orange twist in, you can discard it after the twist and add a high-end cocktail cherry. This may be an especially good way to go if you’re using a 100 proof rye. Some people build the drink in a glass old-fashioned style with a single large ice cube.

If you want to be more of a purist, David Embury’s original version changes the proportions of the ingredients so that it’s 1 and 1/2 ounces whiskey, 1/2 ounce Fernet, 1 teaspoon simple syrup, and an optional dash of Angostura. Not for the fainthearted but I liked it.

With the combination of whiskey, the world’s harshest amaro, and a little bit of sweetness, the Toronto’s flavor profile is a slightly more muscular, drier version of the Black Manhattan that we went over in early March.

A Canadian whisky, is, pretty obviously, the most on-brand choice for the Toronto though American ryes will definitely work as well. (Interested in the distinction between Canadian and rye whiskey? Here’s your rabbit hole!)

I think my favorite Torontos were the ones I made using the new Canadian Club 9-Year-Old Reserve that, aside from the additional five years of aging, is supposed to be a little bit more rye heavy than standard CC. I’ve been critical of Canadian Club’s new 100% Rye Whisky expression, which is not the full-throttle product you might hope for. Its odd sweetness, on the other hand, makes a nice contrast with Fernet. Regular Canadian Club provided a relatively thin whiskey veneer but a very drinkable flavor.

As for full-flavored American ryes, Sazerac was predictably very pleasant and rich while 100 Proof Rittenhouse Rye needed the tiny added boost of sweetness from a cocktail cherry. It was the most hirsute version of the Toronto.