Trending
You are at:Home»Vices»Drink of the Week: The Runaway Train 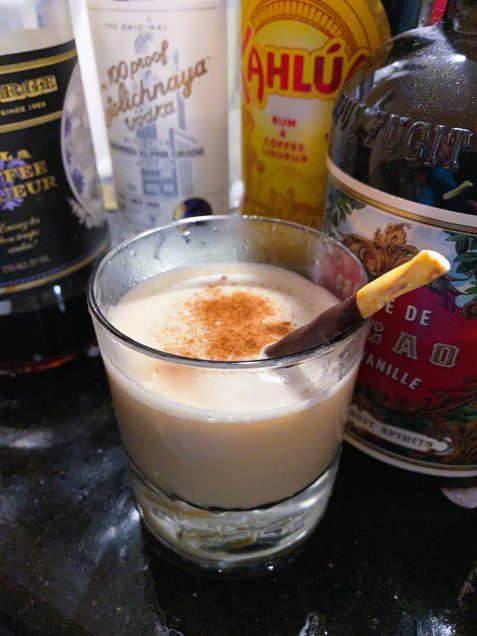 “Runaway Train” Is a spiffy 1985 oddball action/adventure flick in which everyone appears to freeze their butt off during a midwestern snowstorm. It’s what I just happened to be watching when I first got the idea for this revved-up, ice-cold White Russian.

In honor of the Andrei Konchalovsky film and all runaway trains, everywhere, I decided to make it a higher octane  beverage suiting a movie that blends a shelved Akira Kurasawa screenplay, a former Soviet arthouse director, and the testosterone-heavy lunacy of the Israel-bred Golan-Globan production team. With high-proof vodka, high-nutrition milky goodness, and the booze versions of chocolate and coffee, the liquid Runaway Train aims to be an electric boogaloo of a beverage.

Combine all of the liquid ingredients in a cocktail shaker with plenty of ice. Shake with as much intensity as any out-of-control conveyance, and strain into a well-chilled small rocks glass. Top with some cinnamon but don’t worry if you’re a klutz like me and sprinkle a little too much powder. Excess cinnamon only gives the Runaway Train more of a Mexican-style chocolate edge.

I originally made the Runaway Train in the manner of a White Russian, building it in the glass. I found that many versions were good but some were sweet to the point of being treacly. Using more expensive and/or less sweet ingredients seemed to help. But once I hit on shaking my concoction for maximum chill, I decided that this version was not only truer to the snowbound Runaway Train movie, it was a first-rate alcohol and caffeine delivery system. I fell in love with my ice-cold creation and did not look back. Choo-choo!

Let’s talk about dairy. I really think that unsweetened full-fat condensed milk is best here. It brings milky richness without adding a ton of artery-corroding waist-enlarging fat calories – but that’s just a bonus. It’s rich in milky flavor but more refreshing and less heavy.  No wonder Vietnamese iced coffee can be so delicious.

Re: vodka. I believe that any true Runaway Train needs the horsepower of a 100-proof vodka, so Stoli 100 was my go-to here. Nevertheless, 80-proof Stoli and the incredibly cheap but definitely okay bottle of Deep Eddy I picked up on special were also super-tasty, despite the reduced ABV.

Kahlua is the standard sweetener for a White Russian. It’s fine but your Runaway Train will taste like it came from Pop’s Malt Shop when the old man was in a naughty mood. St. George NOLA Coffee Liqueur comes from Northern California but pays homage to New Orleans-style coffee with a recipe that combines coffee beans from Ethiopia and chicory. For people who want more colors on the flavor palette, it’s probably the ideal choice. My dark horse favorite here, however, is Café Dulce which is selling for about $7.00 right now at LA supermarkets. It’s as simple as Kahlua but less sweet with a stronger coffee flavor and bite. It’s a terrific companion for a chocolate liqueur and an insane bargain.

As to wonderful wonderful chocolate, Tempus Fugit is pricey but it earns its reputation for being the best crème de cacao out there. It’s perfect in a Runaway Train. Drillaud is considered a classy choice though it goes for nearly one-third the price of Tempus Fugit. It’s less rich but definitely a big cut above the usual DeKuypers or Hiram Walker. Use either of these with 100-proof vodka and you will be flattened in the very best way.