Trending
You are at:Home»Vices»Drink of the Week: The Old Pal (revisited) 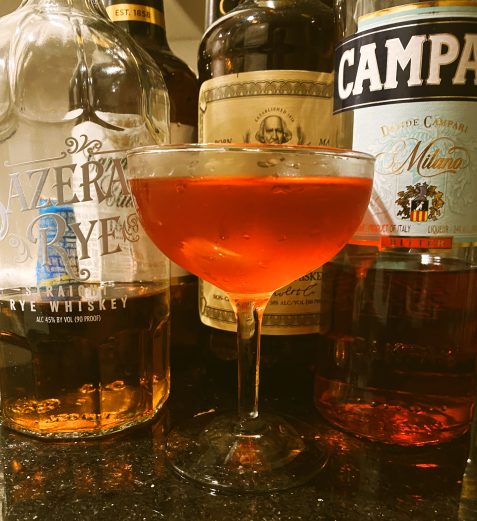 Scottish-American sportswriter William “Sparrow” Robertson passed away in Nazi-occupied Paris in 1941. Though believed to be significantly older than his official age of 83,  one obituary suggested he died partly of a broken heart.

I don’t know how William Robertson felt about the Nazis but the German Occupation meant the end of his gig as sports editor of the shuttered European edition of The New York Herald Tribune — but it was the curfew imposed by the occupiers that might have been the last straw. Well into his very senior years, the formidable night-owl was still known for his ability to outlast the young’uns and close any bar — only to be seen a few hours later looking fresh as the proverbial daisy. The kicker was that everyone called him Sparrow because of his tiny, bird-like 5’1″ physique. He, in turn, called just about everyone “old pal” – and that surely included the proprietor of the eternal Parisian fixture, Harry’s American Bar, who named this drink for him.

Sparrow’s distinctive prose – which reportedly played hell with ordinary syntax — is likely buried on microfiche someplace. Fortunately, Harry MacElhone’s Old Pal was resurrected as part of the cocktail revival and is only getting more popular. Even teetotaling a-hole Adolph Hitler couldn’t kill it.

Put the whiskey, vermouth, and Campari in a cocktail shaker or mixing glass with lots of ice. Stir vigorously until good and cold. Strain into a chilled cocktail glass. Twist a wafer-thin slice of lemon peel over the drink to express the citrus oils and drop it into the drink. Contemplate the possibility that really good old pals might outlast most other things, at least if you’re living right.

The Old Pal’s mix of sweet and bitter is gentler and maybe better than its more well-known cousin, the Boulevardier, which uses sweet vermouth and bourbon. Why? Campari has more than enough sweetness for any drink. The dry vermouth and rye, usually less sweet and spicier than bourbon, softens the bitterness and broadens the overall flavor.

My ryes were Sazerac, Old Overholt Bottled-in-Bond, and a newer product, Canadian Club 100% Rye, which intrigued the hell out of me at the liquor store. Pardon the geeky digression, but regular Canadian Club can be called rye in Canada but not in the United States, where the law mandates that a mash bill has to be 51 percent rye to sell it as rye whiskey. Therefore I was intrigued by the idea of a Canadian Club that kept it 100 when it came to rye grain.

Disappointment awaited. I found the Canadian Club 100% Rye lessened the appeal of the Old Pal. It lacked any of the peppery or astringent notes that should be there and it’s sweeter than some bourbons. On the other hand, regular not-really-rye Canadian Club was as tasty as I remember from when I first became acquainted with the drink 8 ½ years ago.

Moving on, whiskey-wise, 100 proof Old Overholt bonded is naturally bolder and a bit brighter. It made for a tasty but tough Old Pal. Sazerac – still one of my favorite whiskeys – proved its mettle yet again with a notably richer, better-balanced flavor.

Lest we forget, it’s the dry vermouth that binds the Old Pal together. Cinzano extra dry was just okay. I was using a bottle than had been open for a few weeks and it might have been starting to turn. Or, maybe the real problem is that the driest vermouth possible is best in this Campari-dominated beverage, and the venerable Italian brand is not the driest of extra dry vermouths. I had slightly fuller, smoother outcomes with a freshly opened bottle of Noilly Pratt’s even drier extra dry.