Trending
You are at:Home»Entertainment»Movies»Movie Review: “Everything Everywhere All at Once” 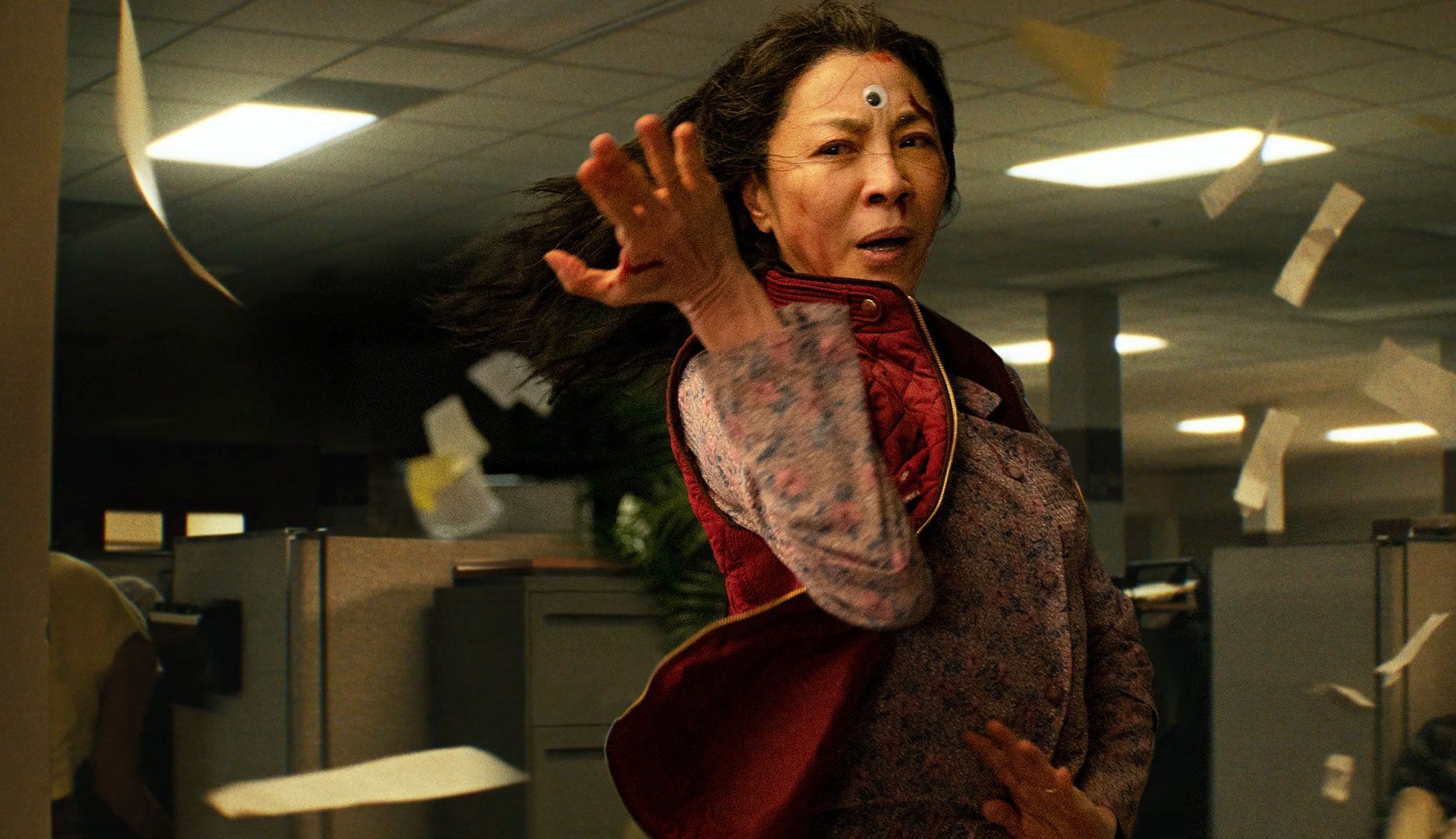 The avant-garde duo of Dan Kwan and Daniel Scheinert, better known as Daniels, made quite a name for themselves with “Swiss Army Man,” their 2016 directorial debut about a suicidal man and the reanimated farting corpse that saved his life. Those who saw the film know it’s about a lot more than that, and the silliness served as a misdirection belying a powerful message about the lies we tell to ourselves and others that are more convenient than the truth, and that humans are only as strong as their connections to others make them. Plenty of people, perhaps understandably, didn’t stick around to find that out, scared off by the insanity of the premise. That’s the risk you take when you crank it up to 11 and just let the crazy fly.

They haven’t combined for another feature film in the six years since then, though both have kept themselves busy between television, music videos and Schienert’s solo feature “The Death of Dick Long.” Throughout that time, though, they toiled away on what would eventually become their sophomore effort: the mind-bending, multiversal science-fiction extravaganza “Everything Everywhere All at Once,” which finally premiered at South by Southwest ahead of its US release. It’s rather fruitless to attempt to explain any aspect of the puzzle box that is “Everything Everywhere All at Once,” but at its most fundamental level, it concerns Evelyn (Michelle Yeoh), the owner of a laundromat with her husband (Ke Huy Quan). She’s in the middle of an IRS audit and attempting to collect and document her receipts while preparing for a Chinese New Year party and the arrival of her judgmental father (James Hong). That alone would be enough spice for a movie, but when Evelyn seems to be accosted by an alternate universe version of her husband while meeting with their auditor (Jamie Lee Curtis), she discovers the plan of an evil entity from the “Alpha dimension” hell-bent on destroying the world. For whatever reason, this mild-mannered Evelyn is the key to saving all of us in all dimensions, even if she just wants to file her taxes and throw a party.

Two things become clear rather quickly during the film: Daniels didn’t calm down one bit in those six years since “Swiss Army Man,” and their style has become even more self-assured the second time around. As the title suggests, “Everything Everywhere All at Once” is a far more ambitious film, spanning lifetimes and universes to tell a story that’s ultimately about the importance of family even when you take them for granted. It’s completely absurd in an entirely different way, though much like “Swiss Army Man,” it relies heavily on its lead to make all this nonsense work. There’s more to the film than just one and a half people in the woods, so Yeoh, taking the lead role for the first time in an American film, has plenty of great actors to play with.

Indeed, it’s Yeoh who is so vital to making the film work; she’s the audience surrogate, after all, and as things get more metaphysical and existential, it’s her job to be mostly bemused by it all until her third-act turn. She has more to do than that, of course, and as she grows into the confident leading woman the film needs, she shows her immense talent once again. Yeoh’s become somewhat of a bit player in the States since the days of “Crouching Tiger, Hidden Dragon,” and her turn here is a wonderful reminder to us Yanks of just how talented she is. The film takes advantage of her skills as a dancer and a fighter, having her access other-dimensional versions of herself with these traits so that it makes sense — well, some amount of sense, at least — why a laundromat owner would be able to fight off hordes of baddies looking to end the world.

I realized somewhere in the second act that “Everything Everywhere All at Once” felt like an adaptation of a long-lost Douglas Adams novel. The film has quite a bit in common with “The Hitchhiker’s Guide to the Galaxy,” with its penchant for absurdity and use of science fiction to cut to the center of how stupidly random the universe can be. Adams had a nearly unrivaled ability to describe the world in the most beautifully surreal way, and Daniels takes a similar approach in its world-building. The way that the various universe-hoppers must do intensely unnatural actions to access the skills and knowledge of their other selves is rife for comedy and skirts the edge of some of the gross-out humor of “Swiss Army Man” without going full bore into it, as well as evoking some of Adams’ best moments. The depth of Daniels’ understanding of the world is equally profound, with layers that peel back to reveal more shades of meaning the more the plot advances.

Time will tell if “Everything Everywhere All at Once” breaks through in a way that “Swiss Army Man” did not. It has the same sort of boundless creativity, anarchic spirit and gleeful insanity of the preceding film, but its subject matter isn’t hampered by the juvenility and toilet humor that held back all sorts of people from enjoying it. Both films prove that Daniels gets a kick out of burying the film’s true themes under a mountain of absurdism and abstraction, but “Everything Everywhere All at Once” casts a wider net and seems far more likely to catch fish, even if it is about a time-traveling laundromat owner attempting to stop an everything bagel from destroying the multiverse. Yeoh’s winning portrayal combined with the work of Stephanie Hsu as her daughter makes for a more universal underlying theme, and while a lot of its digressions may be far enough afield to scare some off, those who stick with it will find another wholly unique spectacle from Daniels that reminds us of the limitless possibilities of cinema.