Trending
You are at:Home»Vices»Drink of the Week: The Black Feather Cocktail 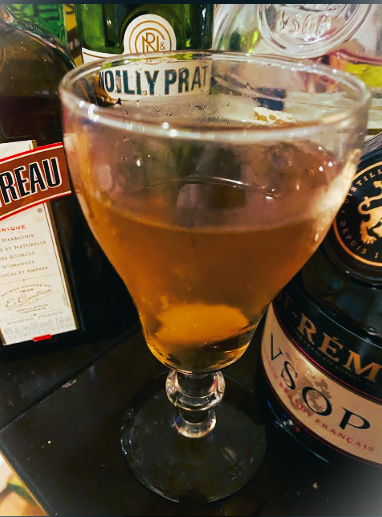 Unlike the Black Manhattan, the Black Feather Cocktail is not dark in color – and the garnish isn’t a crow’s feather. Robert Hess, a founding father of the cocktail renaissance, named it after the home bar featured on his outstanding YouTube series. As he describes it, the drink was an attempt to create a slightly unusual cocktail with all French ingredients.

In the video for the Black Feather Cocktail, Hess cautions newbie mixologists against focusing on creating their own cocktails. I get his point but I don’t want people to be overly intimidated either. My guess is that the writer of The Essential Bartender’s Guide was imagining his audience to be mostly aspiring professional bartenders. That’s very likely not you – and that’s definitely not me! If we make a terrible drink, who cares? No one’s getting charged $20.00 a pop.

At the risk of sounding like Auguste Gusteau from Ratatouille, anyone who seriously enjoys cocktails can make one up – if only by switching out one ingredient in a classic. After all, when you’re messing around at home, all you’re risking is your time and ingredients. Sure, the more you know, the better shot you’ll have at doing something good but that doesn’t mean anyone should be afraid to experiment. (The excellent Life Behind Bars podcast recently devoted an episode to the topic.)

I’m not saying that creating a delicious new cocktail – or even a merely drinkable one – is necessarily easy. Expertise always matters. Any regular cocktail drinker could have come up with today’s solid, simple drink, but it was Robert Hess who actually did.

Combine all the liquid ingredients in a cocktail shaker or mixing glass with lots of ice. Stir vigorously and strain into a chilled cocktail glass. Run an orange or lemon peel around the rim of the glass and maybe express it over the drink before tossing the garnish into the drink.

I wasn’t afraid to experiment with the Black Feather but mostly what I found is that Hess built this one just right. Cointreau is a lot more expensive than most orange liqueurs — especially the standard triple secs you’ll get in a margarita at your neighborhood dive – but its makers can charge the big bucks thanks to its richer, fuller flavor. For me, using the king of triple secs resulted in by far the best version of the Black Feather Cocktail. And it was better still when I used my fairly high-class Remy VSOP brandy instead of value-priced Reynal. Remy (no relation to the Patton Oswalt-voiced rat) brought some richness and spicier notes that I preferred.

But still, I couldn’t stop myself from messing around with mid-to-bottom shelf triple secs. My guinea pig and I were fairly meh when I tried Bols. This brand had that slightly medicinal aftertaste that comes with many inexpensive liqueurs and the other ingredients didn’t completely hide that back taste. On the other hand, super-cheap Doc Wells – which comes across as alcoholic orange syrup — had less aftertaste as well as less taste. I thought that diabetic simplicity made for a small improvement over the Bols version. My household guinea pig, however, outright preferred the more downscale drink to the fancier original.