Trending
You are at:Home»Vices»Drink of the Week: The Snowball Brandy Cocktail 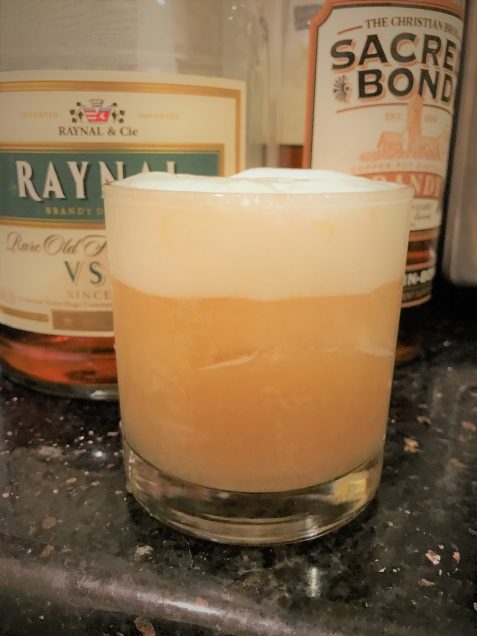 It’s time to get a little festive here at DOTW. According to The Spruce Eats, the Snowball Brandy Cocktail originally comes from something called Applegreen’s Bar Book published circa 1900. 121 years later, this is my first encounter with a drink that deserves to be a household name. It’s a simple, delicious fizz, and works well, even with the cheap stuff.

Combine all of the ingredients except the ginger soda in a cocktail shaker. Shake without ice to emulsify the egg white and ensure a proper froth. Next, add ice, shake very vigorously for as long as you can manage, and strain into a collins or rocks glass filled with ice. (If you want extra frosty brain-freeze booze, pre-chill the glass.) Top with your ginger beer or ginger ale. You should get a very nice, frothy head and a darn delicious drink perfect for those who enjoy the flavor of brandy seriously mellowed out.

The Snowball Brandy Cocktail is fascinating to me because, while the brandy flavor plays a leading role, you don’t have to use A-list brandy. If you’ve got some good mid- or top-shelf cognac around the house, by all means go for it, but that’s not what I did. More on that later.

As much as your brandy, your choice of ginger ale or ginger beer will make a difference. I stuck with Canada Dry Ginger Ale and a Trader Joe’s brand ginger beer. I lean slightly toward the harder edge of a ginger beer but many people may prefer the softer flavor of the all-purpose elixir my grandma used to mix with Canadian Club. Also, try to use simple syrup if you can. It just spreads out the sweetness better than even easily dissolved superfine/baker’s sugar.

One warning: the recipe I linked to above says that the egg white is optional, which is true in the sense that nobody can force you to use egg white if you don’t want to. If you want your drink to taste good, however, egg white is mandatory. It’s essential for mellowing out and blending the flavors. I tried making one without it. Two sips and it went straight into the sink.

Moving on to spirits, I started with my usual default French brandy, Reynal. It was a delicious way to use this classy, value-priced spirit that I always get in the 1.75-liter version for around $30.00. Next, I killed an old bottle of E&J VSOP, a sweet brew that has its share of bottom-shelf charm at about $8.00 for a fifth. It anything it was better, the dank and rich sweetness playing beautifully with the other sugary ingredients. The winner, though, was Christian Brothers’ 100 proof Sacred Bond – a fully American take on brandy. The result was more full-bodied and spicy than the Reynal but more balanced and rounder than the E&J.

Here’s a shocker though — not all brandy is made from grapes! I thought I’d give Laird’s Straight Apple Brandy a shot in a Snowball. It’s a great American spirit but it makes for a lousy Snowball Brandy Cocktail. The apple flavor just throws it off balance. Ice-cold frothy Robitussin. Don’t leave one out for Santa if you want anything besides tube socks and fruitcake for the rest of your life.