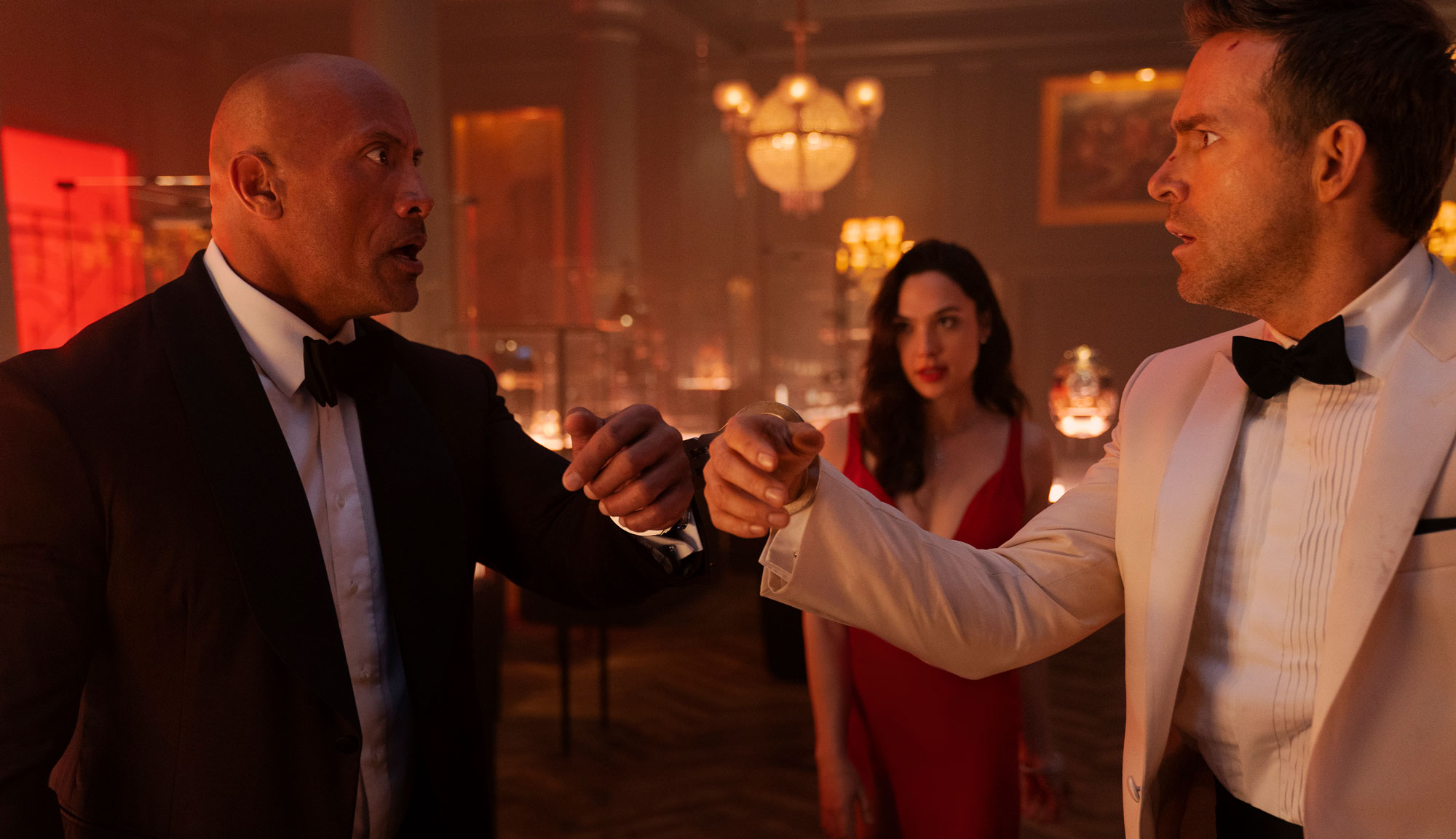 Whenever we talk about the biggest blockbusters of the movie calendar, it’s rare that the films released by Netflix are on anyone’s radar. And yet, movies like “Bright,” “Six Underground” and “Outlaw King” often have budgets in excess of $100 million despite rarely (if ever) getting the sort of theatrical releases that are usually expected out of such expensive propositions. The company gauges its success on subscriber numbers and views on the platform, though plenty have questioned their methodology in determining how many people are actually watching these things. The result is somewhat ephemeral; they seem to show up almost out of nowhere with little to no fanfare in the usual channels despite employing bankable stars and directors. They’re released on the platform and then just sort of fade from view, ready to be replaced by the next piece of new content designed to keep that subscription money flowing.

Such is the case for “Red Notice,” though in this case, it will see a one-week rollout in theaters prior to hitting the service. Positioned as a glitzy action thriller, the film follows John Hartley (Dwayne Johnson), an FBI agent who specializes in art theft, as he attempts to foil the burglary of one of Cleopatra’s three prized golden eggs. He arrives just in time to chase would-be criminal Nolan Booth (Ryan Reynolds), who was tipped off on its location by the mysterious Bishop (Gal Gadot), an underworld mastermind looking to capture all three eggs and sell them to the highest bidder. Hartley looks to arrest Booth once the egg goes missing from his custody, but he soon finds himself teamed up with the career criminal in an attempt to find the last two eggs and get the sort of payday that’s worth throwing away a life of civil service. Like all great heist movies these days, “Red Notice” is full of twists and turns, double-crosses and triple-crosses that are sure to keep viewers on their toes.

Existing at the intersection of “Ocean’s 11” and “Raiders of the Lost Ark,” “Red Notice” looks to rely heavily on the undeniable charisma of its three stars. Dwayne Johnson is the biggest (both in size and box office) movie star in the world, Ryan Reynolds has established himself as the comedic action star du jour of the last decade, and Gal Gadot is Wonder Woman. But the plot is mostly nonsense — a scavenger hunt to find three priceless MacGuffins as everyone races against time to see who can double-cross each other first and get away with the money. The longer it goes, the less anyone could possibly care about what happens, and Reynolds’ nonstop ironic undercutting of everything succeeds in stripping away any sense of stakes.

Since “Deadpool” took off, this is the only sort of character he does anymore, and it’s become profoundly tiring to watch him tread out another quippy detached performance in a slightly different setting and/or genre. Johnson is similarly on autopilot here, using his charm to avoid building anything resembling a compelling character. Perhaps surprisingly, Gadot is the standout; she’s more natural and playful in her performance, but that’s a bit of hollow praise, as the best of three pretty uneventful performances still doesn’t reach the sort of heights you would need to overcome such a thoroughly unengaging premise and plot.

Writer/director Rawson Marshall Thurber has built his career on the sort of low-effort work that we see here with the likes of “We’re the Millers” and “Central Intelligence,” and “Red Notice” falls right into the same sort of flashy but thoroughly forgettable fare. To his credit, he uses the film’s exhaustive location budget to visit all sorts of beautiful places and get some decent establishing shots, but that’s about all we get out of it, with the rest of the film shot in Atlanta and looking about as uninteresting as everything else that’s shot in Atlanta these days. Everybody gets their fancy suits and dresses and looks pretty, but there’s nothing going on under the hood. Mercifully, Thurber doesn’t feel the need to take up too much of our time; the two-hour runtime feels almost short for a big-budget blockbuster, but that doesn’t mean that it’s time well spent.

I sincerely doubt that I’ll remember much of the specifics of “Red Notice” 10 days after watching the film (or even 10 minutes). It’s not about being memorable — it’s about taking up time and giving you a reason not to unsubscribe from their revenue stream. It’s the sort of movie that knows exactly what it is and wants to be, and doesn’t bother trying to reinvent the wheel. That approach is both undeniably boring and risk averse, but some will likely find at least some measure of entertainment from Johnson and Reynolds’ banter. Whether that entertainment is worth the time spent watching it, let alone the money spent to create it, is the real question, and on that metric, “Red Notice” undeniably fails.

Netflix has bought and distributed a lot of movies over the last half-decade or so, many of which are excellent films (e.g., “Marriage Story,” “Mudbound,” “Da 5 Bloods,” “Ma Rainey’s Black Bottom”), but they tend to be buried beneath the bluster of movies like “Red Notice.” Sure, the existence of the big-budget spectacles arguably helps keep the revenue that allows Netflix to go to festivals and buy the better movies on their platform, but if no one knows they’re there, what does it actually accomplish? There is so much chaff to sort through when quantity is king, and given the amount of resources that Netflix pours into a movie like “Red Notice,” it becomes front and center on the platform while lesser but far more interesting work is pushed into the fog of the catalog. If a movie like “Red Notice” helps keep the lights on, I guess it has some sort of value, but it’s tough finding value in sitting down and watching it.