Trending
You are at:Home»Cars»Honda Rolls Further Off Road With the New Passport TrailSport 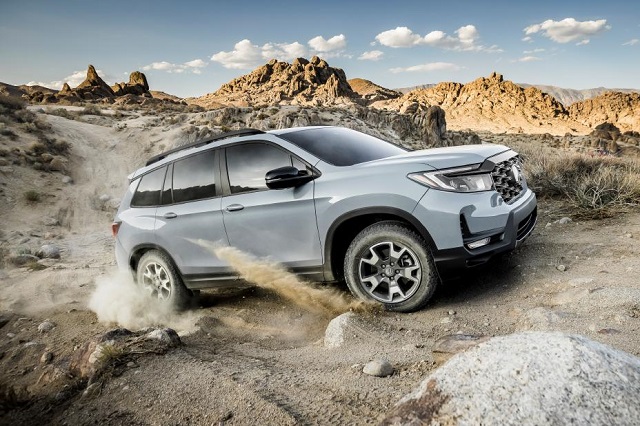 Honda isn’t known for its off-roaders, but that doesn’t mean it hasn’t been on track to compete in this arena. It has been slowly and steadily creeping up on Jeep, Land Rover, Ford and other manufacturers better known for off-road capability.

The drive to make the best off-roader has been good for those of us who love the sport. Manufacturers keep pushing to see what else their SUV can do. Honda’s entry into the market is sure to add more push toward better technologies and capabilities.

When the Honda Passport SUV was introduced as an off-roader, it seemed that the competition was heating up, but apparently that was just their first volley. For the 2022 model year, Honda is kicking it up another notch.

To compete in the off-roading market, there definitely needs to be some stylistic cues that make the SUV stand apart. The original Passport had a rugged design, but it took a less aggressive approach than the flashy, retro look of the Jeep lineup.

For the new model year, the SUV is even more athletic. This unibody SUV has a more aggressive design from the cabin forward. A new bumper and other tweaks add more styling cues to the rear. The vehicle has 8.1 inches of ground clearance to make it pass over trail brush more easily.

A new TrailSport edition is even more capable than the other Passports. This elevates it in the competition with the truest off-roaders. Honda has added some cool features such as the folding mirrors that can be reined in with the push of a button, allowing for tight squeezes on the trail.

While it isn’t the champion among its Jeep and Ford rivals, the Passport’s engine is definitely suited for the job of trail-riding. It is a beefy V6 with a helpful 280 horsepower. There’s no CVT here. The engine is harnessed by an intelligent 9-speed automatic transmission.

Like many in the sport SUV market, Honda is making a play for those who like the look but don’t need the real off-road capability. As such, the Passport doesn’t come with four-wheel drive. Instead, buyers will choose an upgrade, and they won’t get a regular 4×4 drivetrain.

The system is called i-VTM4™ all-wheel drive, and it is an all-electronic approach that allows for traditional four-wheeling without so much hardware to weigh down the SUV. Furthermore, it has what Honda is calling true torque vectoring which makes it more fun on the road, too.

The Passport has a few things on some competitors at this price point. For one thing, the Honda pricing may buy much more cabin space than some off-roaders. Furthermore, it has a class-leading 50-cubic feet of space in the cargo hold. It has some under-the-floor compartments, too.

This is an SUV that can haul your family to school and work during the week, but it is ready to go on adventures on the weekend. The high-tech interior and long list of standard driver assistance features are sure to attract people who want to get everything in one package. Since it doesn’t come with a luxury price tag, we may see more of this SUV on the road and the trail ahead.