Trending
You are at:Home»Vices»Drink of the Week: The Pineapple Sour 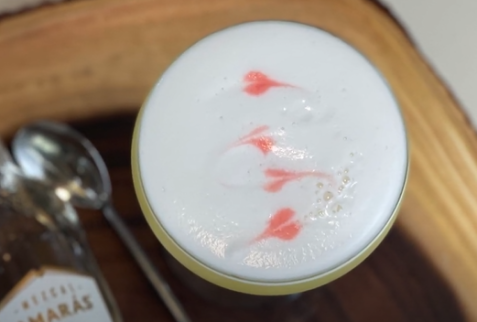 I’m still learning the ways of mezcal but, in terms of what you can do with it, it’s not so different from tequila, gin, or whiskey. I’m going to get more into its distinctive flavor – somewhere between tequila, gin, and a smoky dryish Scotch – in the next post. For now, we have another treat from the mixologists at Mezcal Amarás. It’s a fun sour with my favorite non-booze cocktail ingredient, egg white. What’s especially interesting to me about this one is how the flavors blend – what stands out, and what doesn’t.

Combine all of the ingredients except the bitters in a cocktail shaker without ice. Dry shake it to fully emulsify the egg white. Add ice and shake a second time for as long and as hard as you can stand. Strain it into a chilled, fairly large, cocktail glass or goblet. You should get a nice froth on top. Add a few drops of bitters on top of that froth.

****
There’s some irony to the Pineapple Sour in that it doesn’t taste much like pineapple. Hawaii’s signature export merges with the lime juice and agave to create a sweetly tangy combination that I don’t think I’d be able to place if I didn’t know it was there. Another surprise: using fresh juices is the first commandment of the cocktailian code but I like to break rules sometimes and I made this several times with canned pineapple juice. Honestly, skipping the slightly messy process of juicing pineapple resulted in drinks that were a bit sweeter but just as good as the ones I made with fresh juice.

Regarding the garnish, the recipe from Amarás didn’t actually mention bitters but the image they provided had three pink blots of what sure appears to be Peychaud’s Bitters. Angostura is the traditional bitters garnish for the Pisco Sour and many similar beverages, and it’s very nice here, but the lighter more candy-like flavor of Peychaud’s is a small but notable improvement.

As for the spirits, I’m sure my benefactors will be happy to hear that I’m a fan of Mezcal Verde Amarás which is characteristically flavorful but not as bold as some expressions, making for easier mixing. It’s a gangbusters choice in the Pineapple Sour, adding mildly woody/smoky and citrus/floral notes to balance out the sweet and sour flavors. I also tried it with a couple of other expressions from other mezcal purveyors and those were fine if a bit simpler.

A word of warning: some mezcals may be too distinctive for the Pineapple Sour. I learned that when I tried it with the very excellent sipping mezcal from Amarás that I used previously. The flavors that blend so gorgeously with a bit of fruit sprinkled with sal de gusano…more on that next time…just didn’t mesh well with the Pineapple Sour. I guess that’s why the recipe didn’t call for it! Sometimes it pays to follow the rules.