Trending
You are at:Home»Vices»Drink of the Week: Sangre de Hombres 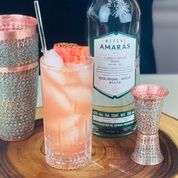 It’s a little embarrassing to admit after nearly a decade, but this is the first DOTW with mezcal. I’ve enjoyed drinks made with the misunderstood cousin of tequila at bars but, until very recently, nary a bottle of the stuff has passed through the doors of palatial DOTW Manor. Lucky me, the good people at Mezcal Amáras have seen fit to throw some bottles at me along with the professional photography you see right here.

I once figured that the only inherent difference between mezcal and tequila was that the latter had to be made from agave grown in Mexico’s Tequila region. However, this is not like the case where champagne is just sparkling white wine made from grapes harvested in Champagne and cognac is just brandy made from Cognac-grown grapes. The difference between tequila and mezcal is much more similar to the differences between Scotch and Irish whiskey. They are similar in many ways but notably differing ingredients and brewing techniques make for dramatically different flavors.

Tequila is always made from blue agave, while mezcal uses multiple species of agave plants. I can’t say I’m an expert on just why this is, but the flavor is easily distinguished from tequila, with mezcal being smokier and more earthy. In Mexico, mezcal is typically sipped in a wide, shallow cup and often complemented by food or sal de gusano…a seasoned salt that also includes parts of the infamous larva at the bottom of some mezcal bottles. My high-school buddies misnamed it “the tequila worm” and, boys being boys, sometimes consumed it on a dare. I will soon be consuming the salt made from that worm because, cocktailians being cocktailians, I feel that such is my duty.

Time for the nifty drink suggested by the Amáras crew. Created by bartender Gustavo Rojas, Sangre de Hombres is a fairly brutal name for a mixed drink. I’m happy to say, though, that its flavor is quite civilized.

Put all of the liquid ingredients in a cocktail shaker filled with ice. Shake the drink as vigorously for as long as you can stand and strain it into an ice-filled glass. A collins glass is probably the safest choice but larger fancy wine glasses or goblets are just as good. If you want to take the drink all the way home, take a watermelon chunk, sprinkle it on all sides with black pepper, and then put it on a toothpick. Place the chunk on top of the drink, and let it lay there for a bit while you drink some of the Sangre de Hombres; you can leave it or eat the chunk later. I think the tiny amount of pepper on the chunks that goes into the drink makes it just a little better – but then I really love black pepper and always have.

One of the first things that struck me about Sangre de Hombres is that it was less sweet than I was expecting. It turns out that, unlike your oranges and apples, most of the sugar in watermelon is in the flesh and stays there when you juice it. Watermelon juice on its own is more like a lightly sweet melon-flavored water.

For balance, the Ancho Reyes chili liqueur – another new addition to the DOTW booze arsenal — provides more concentrated sweetness along with a bit of spicy heat. The result is a refreshing, perfectly balanced, grown-up refresher – and the grown-up part is where the Mezcal Amarás Cupreata that the recipe calls for comes into the story.

Priced at $50+ a bottle, this is a super-premium brew that’s been widely acclaimed and won more than its share of gold medals. There’s some contradictory information online, but the bottle I have says very clearly that Mezcal Amarás Cupreata is 43 percent alcohol. That makes it 86 proof – a fun change from the usual 80 proof ABV that makes for a slightly more serious flavor. I also like that the Amarás company seems to be unusually committed to sustainability and fair business practices. We’re told they make the world’s first carbon-neutral mezcals and that can’t be a bad thing.

Cupreata, by the way, is a type of agave that is also called papalote. That either refers to a kite or a butterfly, in tribute to the winged shape of the plant. As for the mezcal that’s made from it, the flavor is highly textured and spiky in a good way. It’s a taste you can think about.

It’s okay to make Sangre de Hombres with a more value-priced mezcal like Amarás Mezcal Verde which I’ll be discussing next time. With its more complicated flavor profile, Cupreata may be considered by many as more of a sipping mezcal than as a base spirit for mixed-drink. However, with Sangre de Hombres it makes for a fuller, more red-blooded beverage.