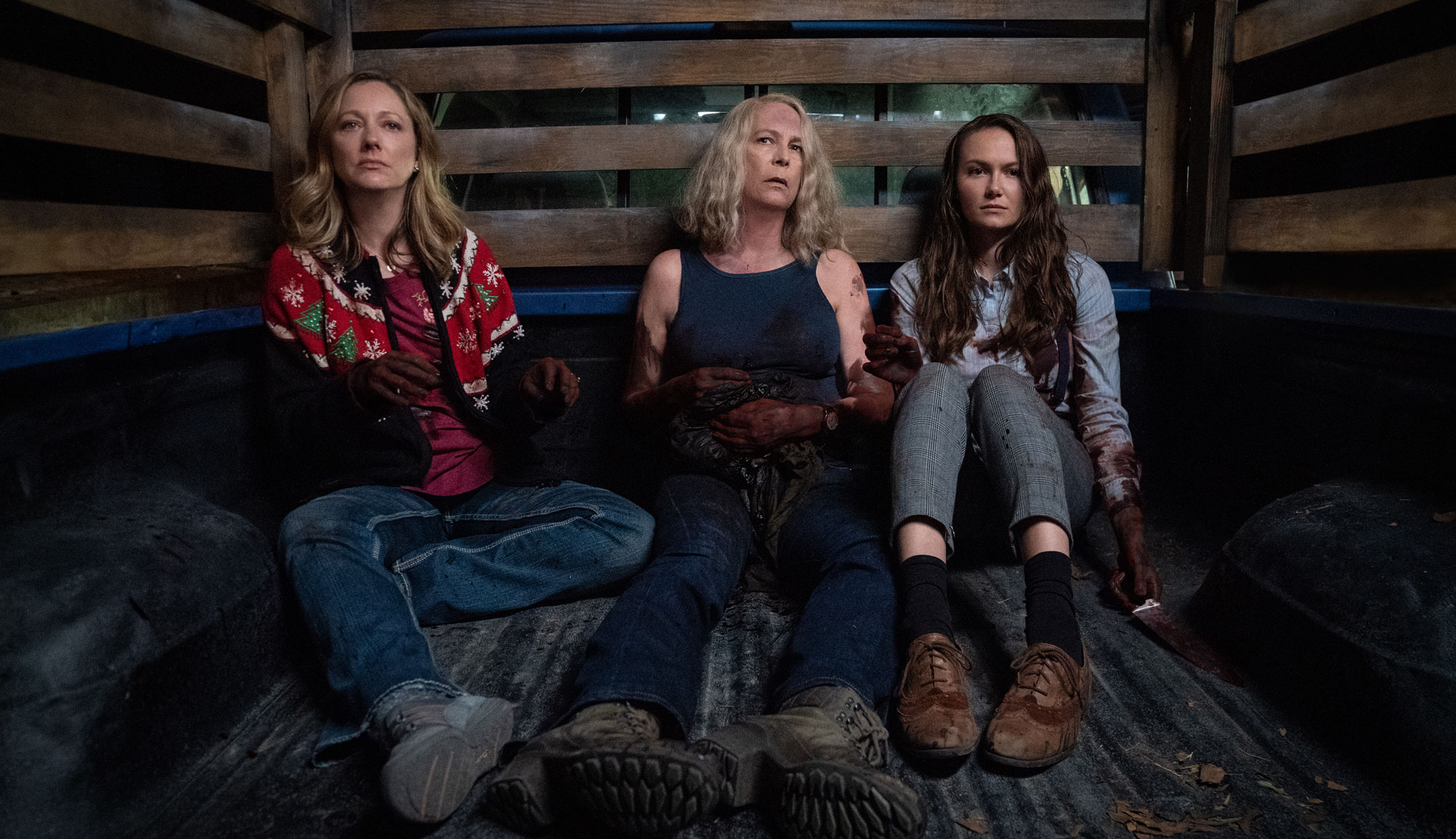 This review comes with a caveat that everything written here about “Halloween Kills” may be completely nullified by events in “Halloween Ends,” the final entry in the David Gordon Green/Blumhouse sequel trilogy to 1978’s “Halloween.” This is technically true of many other movies; even within this franchise, “Halloween III: Season of the Witch” probably would have fared better upon initial viewing if folks knew that it had nothing to do with the Michael Myers stories of the first two “Halloween” films. But “Halloween Kills” was always planned and produced in conjunction with “Halloween Ends,” and the ending is so abrupt that there are multiple threads that may end being redeemed retroactively as part of a larger plan. Of course, that doesn’t justify the messy storytelling and shoddy thematic work in “Halloween Kills.” Though there are some great scenes with incredible set pieces, jarringly gruesome moments, truly inspired comedy and emotionally affecting performances, there’s also a massive lack of tonal and narrative cohesion.

Immediately picking up at the end of 2018’s “Halloween,” Laurie Strode (Jamie Lee Curtis) is hitching a ride to the hospital in the back of a truck with her daughter Karen (Judy Greer) and granddaughter Allyson (Andi Matichak). In the background, Laurie’s house is burning to the ground with her personal boogeyman, Michael Myers (James Jude Courtney), going up in smoke. But soon after, firemen unintentionally free the masked slasher from his infernal prison, and he begins to go on another killing rampage across Haddonfield. Meanwhile, Tommy Doyle (Anthony Michael Hall) and Lindsey Wallace (Kyle Richards), the two children who were being babysat by Laurie on that fateful night in 1978, gather with their childhood friend Lonnie (Robert Longstreet) and Myers’ former nurse Marion (Nancy Stephens) as they do every Halloween in witness to those events. As news emerges of Myers’ survival, the town’s 40-plus years of fear and rage spill out into the streets as roving bands of vigilantes seek to stop Myers once and for all.

Despite bringing back almost the exact same creative team as 2018’s “Halloween,” it’s shocking how different “Halloween Kills” plays compared to its predecessor. Helmed by returning director David Gordon Green, who reteamed with Danny McBride and Scott Teems on the script, this middle part of a new trilogy is the shaggiest of dogs. If the “banh mi” dialogue between two cops on the beat of a slasher felt like an odd tangent in the 2018 movie, then this whole film is scattered with Vietnamese sandwiches. There are moments where the brutality of the murders resonates with a sense of great pain and loss of life, and then there are others where the savagery is almost cartoonish and impossible. There are jokes derived from both who characters are and how they’re dealing with an insane situation, but those are juxtaposed with extended bits of over-the-top riffing and mugging that feel more appropriate for the Mad magazine adaptation than the film itself. Some of the emotional and thematic tangents are full of insight and acutely question the way that these traumas echo forever forward, but then there are whole swaths where the film dwells on mob justice and mass hysteria to no discernible end and with nothing of interest to say. (It doesn’t help that the “town vigilante” angle was covered much better in 1988’s “Halloween 4: The Return of Michael Myers”). There are fun winks and references to other (now non-canonical) entries in the franchise, as well as other horror films and tropes, but it’s hard to figure out why they were included.

And that’s the biggest feeling that will likely stay with viewers as they emerge from “Halloween Kills”: what was that about? 2018’s entry was a very intelligent mediation on three generations of women who intersect with a horrific force of violence. This movie feels like whole sequences could be cut and nothing would change in terms of plot or motifs. Is it about how urban legends are spread through revisionist history? Is it about how making mythical monsters of these murderous men literally transforms them into something beyond human? Is it about a town that refuses to move on? Or perhaps it’s that every town in America has a Michael Myers in its past (and future), and such violence is baked into the societal framework. Maybe it’s all of these things or none at all. While there’s certainly no need for the filmmakers to take the audience by the hand to walk them through such matters, there are so many contradicting events and characters in “Halloween Kills” that they cancel each other out and leave a confused mass of noise behind.

The actors are all game, though some lean into their comedic chops more than they should, with Green indulging them and even adding slapstick into those scenes as well. Curtis has very little to do, with a few scenes of heartbreaking triumph and impressive brazenness that will make you wish she was in it more. Greer, Matichak and Will Patton continue the tremendous work that they began in 2018’s “Halloween” and create rich characters that are full of contradictions but in an intriguing manner. Courtney is also great as Myers, with his physicality creating a unique mix of awkward lurching and lethal efficiency that makes him feel grounded and impossible in equal strokes. Hall, Richards and the other returning champions, however, are poorly scripted and far too theatrical, jarring harshly against whatever sort of relatable, grounded characters the audience is supposed to see.

Technically speaking, “Halloween Kills” is full of gorgeous shots, with DP Michael Simmonds expertly emulating Dean Cundey’s cinematography from 1978’s “Halloween” one moment and then seamlessly transitioning into his own uniquely engaging framing the next. The score by John Carpenter, Cody Carpenter and Daniel A. Davies is also terrific, while Christopher Allen Nelson and Sandra S. Orsolyak deliver some truly impressive bits of splatter and make-up effects that cut through all of the script’s bungling to shock and unnerve viewers.

However, too much of “Halloween Kills” feels like a half-measure. Backstory and character embellishments are introduced but not to make them more compelling or serve a greater theme that runs through everyone’s story. Multiple comedy scenes happen in a row, followed immediately by plot-twisting violence that requires audiences to take it all very seriously and mourn characters who were basically an amalgam of punchlines in human form. The people of Haddonfield are overreacting, except when they aren’t because they’re in the grips of true evil; the action is painfully realistic, except when it’s over-the-top ridiculous to elicit guffaws and gasps; and Michael Myers is simply a flawed person, except when he’s a literal boogeyman. It’s uncertain how “Halloween Ends” can sew all these disparate threads up into something approximating a cohesive whole. At the moment, it doesn’t even resemble a patchwork quilt with mildly related parts woven next to each other. There are a lot of fun, impressive and cool moments executed by talented artists in “Halloween Kills,” but they seem to all be occurring in spite of the film that contains them and not because of it.