Trending
You are at:Home»Vices»Drink of the Week: The Italian Gentleman 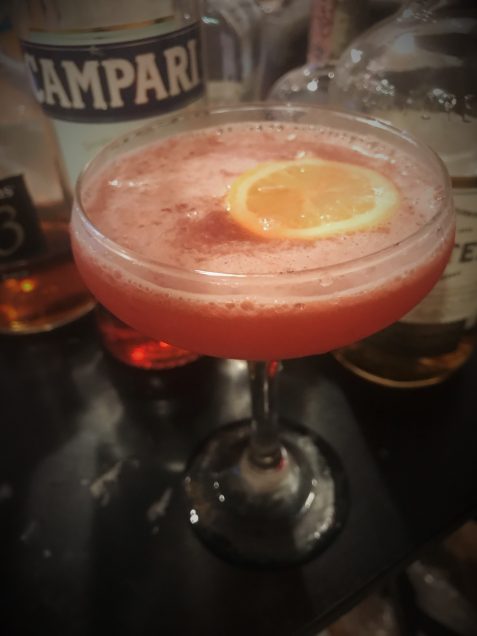 The popularity of Negronis since the 2010s notwithstanding, lots of people are Campari haters. Even diluted somewhat in a cocktail,  the digestif is just too much for lots of people. If that’s you, you’re going to just loathe The Italian Gentleman. I, on the other hand, get a bit of a kick even out of drinking Campari straight — a fruity sweetness bomb followed by a bitterness tactical nuke. If you’re similarly friendly to this well-known but not universally beloved digestif, you should definitely be on board with this week’s beverage.

Combine all of the liquid ingredients in a cocktail shaker with lots of ice and shake as vigorously as you can stand. Strain into a good-sized chilled cocktail glass. You might see a lovely white froth form on top.

*****
The Italian Gentleman appeared in Food and Wine in 2014 and was later included in a book by the same writers called Be Your Own Bartender but it’s still s a drink with a classic feeling that could have been around since early in the last century. The Campari dominates but the bourbon doesn’t get lost and the lemon juice adds refreshment and flavor contrast.

I tried it with a few solid, reasonably priced, mid-shelf bourbons as well as with other types of whiskey, particularly rye. I never made a bad Italian Gentleman but the bourbon iterations were better, so stick with that unless you feel like experimenting. Of Evan Williams 1783, Old Forester 86, and Larceny, I enjoyed the last choice the most. The sweeter, more easygoing undercurrent it gave the drink was a welcome touch given all the bitter notes.

This brings us to those optional orange bitters. Campari is bitters, so adding another one might seem like overkill. On the other hand, if you like Campari, you’re probably amenable to some extra depth in your sweet and brightly colored cocktail.

Finally, it’s not make-or-break but I do recommend using simple syrup over superfine sugar in your Italian Gentleman – it seems to spread the sweetness out more evenly.