Trending
You are at:Home»Entertainment»Movies»Movie Review: “In the Heights” 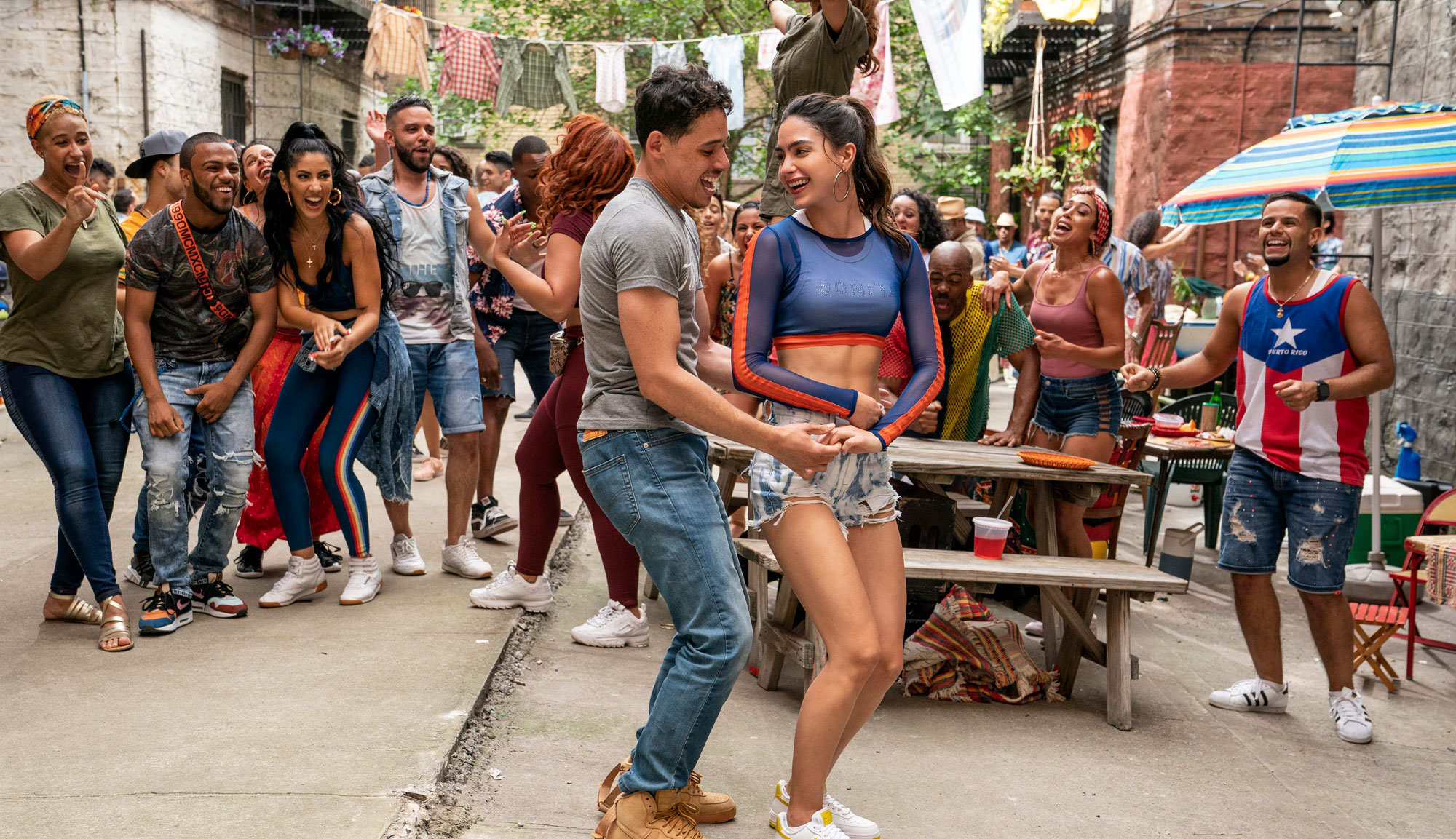 Like any project, a movie has a finite amount of attention and energy devoted to it. No matter the budget or how accommodating studios may be, filmmakers inevitably must prioritize the aspects of their productions that they deem most important to get right to make the entire undertaking a success. Despite being based on pre-existing and generally well-received material that’s been adapted by its creators for the big screen, “In the Heights’” most notable flaws are found in the storytelling and character motivations. Perhaps trusting that the source material’s architects, Quiara Alegría Hudes and Lin-Manuel Miranda, had already nailed the narrative portion in its theatrical rendition, director Jon M. Chu focuses less on those emotional and story beats. However, this is drastically offset by the fact that Chu delivers a vibrant film with impressive musical sequences that explode with energy and will be watched and adored for decades. This disparity hinders “In the Heights” from being a true piece of great filmmaking, even if it still makes for dazzling entertainment.

The film takes place in New York City’s Washington Heights, a tight-knit community of immigrants and descendants from multiple Latin countries that is slowly losing its identity to gentrification. Every resident has a story to tell, but the movie focuses on a select few, including Usnavi (Anthony Ramos), who runs the local bodega that serves as the unofficial crossroads for the neighborhood; it’s a place where you can purchase your café con leche and lottery tickets, and catch up on all the latest gossip. Usnavi is in love with Vanessa (Melissa Barrera), a hairdresser at the local salon, but she has dreams of becoming a fashion designer in Manhattan that clash with his own aspirations. Meanwhile, at the local cab company across the street, owner Kevin (Jimmy Smits) is under financial pressure paying college tuition for his daughter Nina (Leslie Grace), whose return home for the summer reawakens the romantic feelings that Kevin’s assistant, Benny (Corey Hawkins), has for her. As a heatwave builds towards a potential blackout, the elderly matron of the block (Olga Merediz) watches her proxy children grow and change with the world around them.

Jon M. Chu is a prime example of why there needs to be more crossover for talented directors who work in musicals and action films. Both require a mastery of choreography, blocking, cinematography and editing to instill a propulsive energy that communicates tones and character while being visually arresting yet easy to follow. Almost everything good about “In the Heights” is due to Chu, choreographer Christopher Scott and cinematographer Alice Brooks. The film references basically the entire history of movie musicals while combining these sequences into something wholly original and vibrant. From Busby Berkeley and Ernst Lubitsch to “Royal Wedding” and “West Side Story” to Bollywood and more, Chu’s influences are evident in the DNA of these wondrous scenes. It cannot be emphasized enough that the coordination of the performers in so many situations, formations and shots is awe-inspiring, which is what makes so many of the film’s detriments that much more disappointing.

Most of the cast turns in strong performances that embody characters or outsized personalities befitting of certain musical tropes, but Ramos is too muted in the lead role. He switches between overjoyed and deeply concerned without much nuance or anything compelling. He has a good voice and dances well but is too trite and cliché to be as engaging as needed. The other casting issue is that Miranda, co-creator/writer/originator of the Usnavi role on Broadway, inserts himself into a minor role as the shaved ice purveyor. Even in this diminished capacity, the multi-hyphenate artist is very distracting on screen. Perhaps those who don’t know who Miranda is won’t be affected as much, but he’s largely miscast in a role that calls for someone who is naturally humorous, which he isn’t in this film.

The other issue connected to Miranda is that, even more than “Hamilton,” it becomes apparent how much his songs all sound alike. Writers of musicals usually have signature sounds — it’s not hard to pick out works by Gilbert & Sullivan, Stephen Sondheim and Andrew Lloyd Webber based purely on musical structures or oft-used melodies — but so many of the songs in “In the Heights” have the same bombastic chorus in between less-than-great rapping as voices join into larger and larger sounds. Each song taken on its own works well but back-to-back for two and a half hours can be draining and reveals the shallowness of the diversity of songwriting. Hudes and Miranda worked together to adapt their stage musical into a film but did so by eliminating a lot of the more subtle elements of the stories and relationships, as well as ironing out a bunch of the conflict that would have improved the movie. Addressing topical aspects like DACA and DREAMers is a nice addition, but it may not have been worth the price of flattening out a lot of the interconnected drama between characters that would make it a richer film.

In addition to the incredible singing/dancing sequences, “In the Heights” looks fantastic. That expertise in crafting scenes and shots extends to moments of dialogue and creating a sprightly world that pops with color and energy but still feels grounded in the reality of the location. Chu and company use a bunch of techniques throughout the film to create different moods that depict the inner lives of characters, even as the songs remain mostly the same. Merediz has a scene that is one of the most visually dynamic sequences in a musical since “Hedwig and the Angry Inch” with an incredible performance that should garner her an avalanche of praise and awards. Additionally, the cast is comprised almost entirely of Latin actors who aren’t just generically “Latin” but are each distinctly from different heritages that are explicitly called out in songs. Representation matters, and it will be thrilling for many audiences to see such cultures on screen complete with idioms and customs that are immediately relatable.

“In the Heights” is a bizarrely split film. Chu, Brooks and Scott have formed one of the best-looking movies in years, utilizing decades of styles and influences to create a melting pot of fantastic entertainment. There are heartfelt moments and powerful scenes delivered by great actors that are affecting in surprising ways and featuring demographics that are too often relegated to bland tropes. Unfortunately, this is undercut by a sort of sameness of sound, a very bad bookending structure and some miscasting. “In the Heights” will be most successful taken in small bites, whether it’s videos of each song or a montage of clips put together that can eschew those lulls and missteps. Chu and company have created a technically spectacular film that will likely be influential for many years — it’s just a shame that it gets bogged down so much.