Trending
You are at:Home»Vices»Drink of the Week: The Del Prado 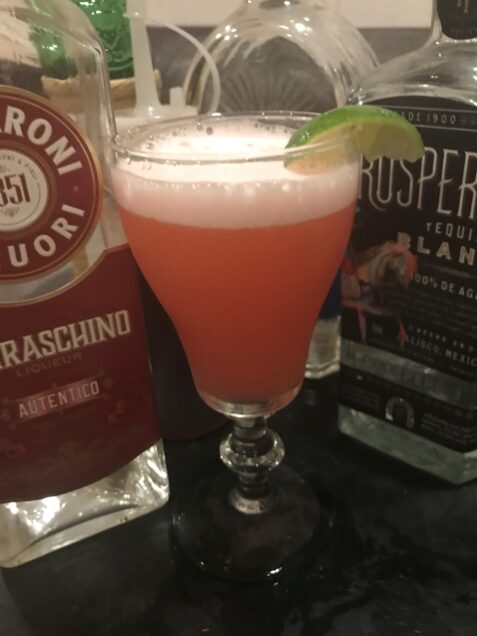 Last week we talked about the tequila-based beverage, the Prado. The origins of the drink and the name are vague at best – other than the fact that prado is the Spanish word for a meadow. The one other clue I was able to find was in a short Bevvy article. It credits Hotel Del Prado, an establishment that was torn down in the wake of the devastating 1985 Mexico City earthquake. The additional confusion is that the recipe is pretty different from the others. But that’s fine. The cocktail I’m calling the Del Prado is a little more inviting than the Prado and different enough to rate a post of its own.

Combine all of the liquid/viscous ingredients in a cocktail shaker and dry shake without ice. Next, add ice and shake again. To get that lovely cap you see in the picture above, you want to agitate this one a little extra vigorously on both shakes.  Strain into a chilled cocktail glass, maybe wait a minute to let the egg white separate from the other ingredients a little more.

The Del Prado is a sweeter and more fully rounded drink than the Prado but also one that doesn’t allow for as much leeway in your choice of a spirit.  I was able to mess around with anejos and reposados on the Prado I find it hard to put these things into words sometimes but let’s just say that the Del Prado with an anejo especially tasted the way your feet feel when your car’s brake pads start wearing down.

The blanco tequilas I used were all fine, however, but some were more fine than the others. Camarena was a solid and not too intrusive choice. Prospero is just plain outstanding and mixes in predictably delicious fashion with just enough agave and sharper herbal flavors to add some interest. The least among the not-actually-equals was Sauza. I sometimes like how this nicely priced product is unabashedly agave forward but it’s debatable whether or not that made for the best possible harmony in this case.

I didn’t see an enormous difference between using Luxardo Maraschino, usually considered the gold standard, and Lazzaroni. Both made for great drinks.

The choice of grenadine is another story. I’m a fan of Master of Mixes grenadine which is nicely priced yet features actual juices and sugar instead of the high fructose corn syrup most of the cheaper brands sport. That version tasted good and looked nice with a slightly translucent pink color below the white cap from the egg white. Since making your own grenadine is incredibly easy if you don’t insist on using home-squeezed pomegranate juice, I did so. My homemade version lacked food dyes so, while the drink had an even more refreshing and fruity flavor than with Master of Mixes, it was an unattractive grayish beige. The picture that went with the Bevvy article showed Rose’s grenadine, an old bar standby I’ve heretofore avoided for its 100% industrial ingredients. It does, however, have plenty of food coloring and so it’s Rose’s you’re seeing above. However, it was the worst tasting drink of the lot and I have to put the blame entirely on the grenadine. Rose’s has a nice sweetness to start with but a cleaning product aftertaste followed. It was lousy tasting artificial products like these that were supposed to be the first items put up against the wall and shot when the cocktail revolution took place.

And then we come around to the blessedly fresh citrus juice. Most of the recipes I saw called for lime juice, in line with the earlier Prado. I think that may be the way to go. However, the recipe I linked to at the beginning of this post calls for lemon juice. The result was, not surprisingly, a little softer and a little less tart. I like the sharper tartness of lime as a contrast to the maraschino and grenadine. The house guinea pig at Drink of the Week Manor preferred the lemon version — but I’m right.