Trending
You are at:Home»Vices»Drink of the Week: The Cunningham 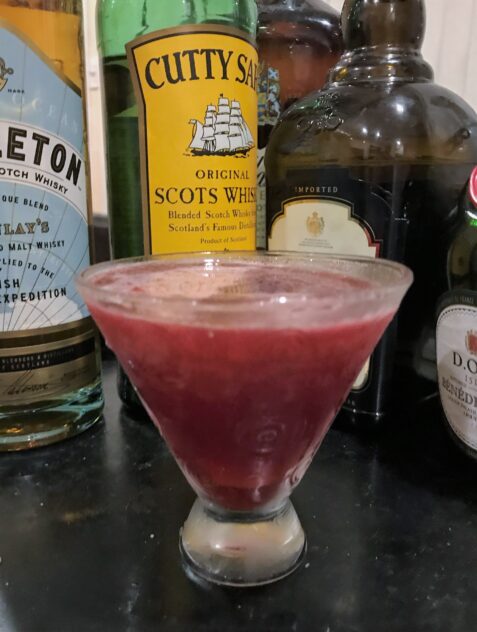 Everyone online seems to call this drink Cunningham, as opposed to “the Cunningham.” As someone who never got used to saying “Pretenders” instead of “the Pretenders,” I’m going to err on the side of prejudice and stick with the article. (I know no one says “the Depeche Mode” or “the Duran Duran” but I don’t like those bands anyway!)

The Cunningham is credited to bartender Marco Dionysos of the long-defunct Tres Agaves – making this my second drink in a row invented in a venerable San Francisco Mexican restaurant. As per Difford’s Guide, the Cunningham is named in honor of renowned Scottish fiddler and composer Johnny Cunningham, who died of a sudden heart attack in 2003. It’s an imaginative and boozier spin of the 1920s Scotch whisky-based classic Blood and Sand…excuse me the Blood and Sand. This version boosts the whisky and adds lemon juice while cutting down on blood orange and sweet cherry liqueur and adds Benedictine in place of sweet vermouth. The result is a delightful whiskey sour variation that’s perfect for people who find the drink named after the 1922 Rudolf Valentino vehicle a little overbalanced in the sweet direction.

Combine all of the liquid ingredients in a cocktail shaker. Shake vigorously with lots of ice and strain into a not-too-small chilled cocktail glass. Sip or slurp.

I chose the Cunningham because we seem to be having an extended season for blood oranges this year. As with the Blood and Sand, doing this with regular OJ lacks a certain panache in terms of presentation but also, in my experience, in terms of taste. Even at just ½ ounce, it makes a big difference. I’m using the recipe offered over at Liquor.com. The Difford’s recipe I linked to above uses slightly more Scotch and doubles the very sweet liqueurs up to half an ounce. It also says the drink should be fine-strained to get rid of the pulp and ice crystals. I found the overall effect a bit too sweet and the fine straining doesn’t help. A quarter ounce of the cherry liqueur and Benedictine is plenty for me.

I used three different Scotches. Ballantine’s is a solid blended Scotch for a good price, especially if you can find it on-sale and double-sized. After my Cunningham’s bottle’s sad demise, a rare trip down to my corner liquor store – I’m a thrifty grocery store/big box booze buyer – rendered Cutty Sark, which is even less good than I remembered it from youthful binges, and the better and pricier Shackleton, brewed in honor of the legendary explorer. You absolutely don’t need to use fancy single malts or whatever with a cocktail like this, but Cutty adds a slightly metallic edge that doesn’t do the Cunningham much good – though it’s still drinkable. A portion of Shackleton’s sales goes to charity and that should maybe make you feel better about the extra $15.00.

And, here’s something if extraordinary musicianship is your thing.