Trending
You are at:Home»Vices»Drink of the Week: The Bebbo Cocktail 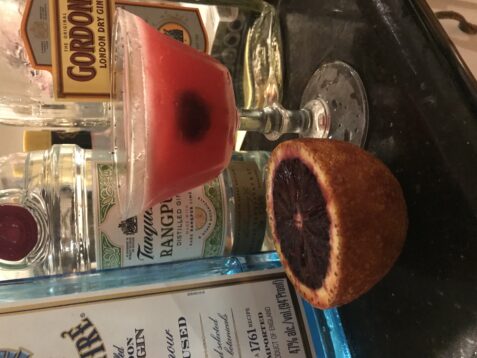 What is a bebbo? It’s the Konkani word for “frog.” What is Konkani? It’s the official language of the Indian state of Goa. The cocktail archeologist sometimes called Dr. Cocktail, and sometimes referred to as big-time Hollywood graphic designer Ted Haigh, is not a fan of the random name of this week’s beverage, which lacks the slightest hint of frogginess or South Asian flavor – at least with most base spirits. I say a drink by any name would taste as sweet; I’d go as far as to say that the Bebbo Cocktail is one of the most refreshing experiences you’re likely to have served up in a coupe or martini glass.

Writing in the 2019 Edition of his Vintage Spirits and Forgotten Cocktails, Dr. Haigh describes the drink as a variation on the Bee’s Knees – usually a simple gin, honey syrup, and lemon juice variation on a gin sour though I’ve only had it with bourbon. I like Haigh’s version of the Bebbo because it dispenses with the fuss of making honey syrup and uses straight honey. The pleasant surprise here is that ordinary honey is quite easy to dissolve in room temperature liquid if you just throw some in the science oven for probably no more than about 15 seconds. (No need to risk melting your plastic bear!)

What the good doctor doesn’t tell us, however, is that this drink is even better, and much prettier if you do as many suggest and use blood oranges while they are still in season. If you’ve never tried a blood orange, its taste has an extra tang and less sweetness than your standard orange, as well as about 1/10th of the bitter flavor we associate with grapefruit. In terms of presentation, the dark purple flesh produces a deep red juice that changes the color of your Bebbo from a sort of dingy yellow to a delightful dark pink. Still, like its cousin, the Blood and Sand, it can be made with regular orange and can be almost as good.

Combine the non-garnish ingredients without ice in a cocktail shaker. Stir enough to make sure the honey is fully dissolved. Add ice and shake as vigorously and as long as you can manage and strain into a chilled cocktail glass. If you want to add a sweet flourish and some extra visual interest, throw in a cocktail cherry.

The Bebbo Cocktail is a drink that allows for messing around with most of its ingredients. The one thing I can tell you for sure is that you should use honey. Strict vegans use agave as a honey substitute, and there are some similarities in the flavor. I was forced to try agave when some very persistent and suicidal ants invaded my closed honey-bear bottle. Without honey, it was not remotely the same drink – though bitters might have helped.

As for the citrus, the less sweet but more colorful and tangy/bitter blood oranges improved the flavor balance as well as making the Bebbo prettier. Regular orange juice was much uglier though you may prefer the taste if you’re catering to your sweet tooth. Pink-fleshed and sweetly tasty cara-cara oranges were somewhere in between both in terms of presentation and flavor; in other words, moderately awesome.

As for the booze, you might assume that your brand of London dry gin wouldn’t matter much with the other ingredients dominating, but that’s not necessarily the case. Unassuming, value-priced 80 proof Gordon’s Gin stayed in the background. The 94 proof and more flavor-forward Bombay Sapphire added a bit more of a base to the Bebbo but was still more or less the same drink.

I could have left it right there, but when I saw Tanqueray Rangpur for a good price in a local grocery store, I snagged a bottle because I wondered how the heavy-citrus flavor of Rangpur limes (not really limes) would play with the Bebbo Cocktail – and then there was an admittedly tenuous connection with South Asia, if not frogs. I expected not-limey gin to accentuate the tart and tangy flavors in the beverage. I was especially pleased, though by  hos this tasty but relatively low-proof (82.6) gin asserted itself in the drink — reminding the drinker that the Bebbo is a cocktail and not just funny tasting juice.