Trending
You are at:Home»Vices»Drink of the Week: The Brandy Sour 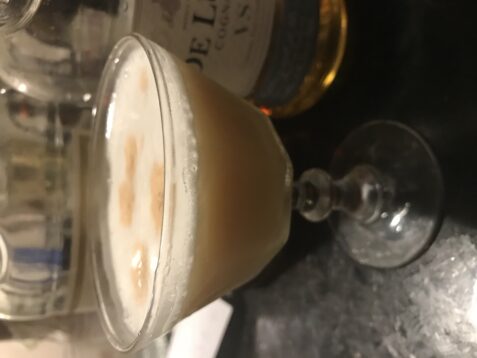 Let’s consider possibly the single most popular mixed-drink genre, the sour. Aside from those that have “sour” in the name, pretty much any drink with lemon or lime juice is a member of the sour family. That means margaritas, daiquiris, sidecars, and so on. While it was once almost eclipsed by the pisco sour, the whiskey sour continues to spawn a gazillion tasty variations; gin and vodka sours aren’t going anywhere either.

Nevertheless, it occurred to me recently that, sidecars aside, I couldn’t remember having a straight-up sour made with European or American brandy. I stipulate that because the pisco in a pisco sour is a type of brandy from Peru and Chile, but the flavor is very different from the brandy or cognac most of us are used to. Possibly to our detriment, we Americans don’t seem to take that much to pisco when it’s not in a sour. (I have to admit not loving the one brand I’ve had straight when I got a bottle of many moons ago.)

Googling on, I found that there’s a type of brandy sour that is the national drink of Cyprus, or so the Wikipedians say. If anyone wants to send me Cypriot brandy and lemon squash, I’ll gladly give it a try. And, no, lemon squash isn’t a yellow and sour cousin of zucchini, nor is it a game similar to racquetball. This type of squash is fruit syrup that is said to be a favorite of captive gorillas.  You can learn something new with every drink!

Difford’s Guide provided a recipe I could actually make that’s served on the rocks. I tried it, and it’s fine but it wasn’t exactly what I was looking for. I moved on to the ultra-simple and very sour version proffered by cocktail superstar David Wondrich via Esquire many years back. He says it’s the oldest type of sour. Sometimes you learn two new things with every mixed drink!

So, I finally decided to combine the Difford and Wondrich recipes while adding a touch borrowed from the pisco sour and assorted whiskey sour variations. See what you think.

2 ounces brandy or cognac
½ ounce fresh lemon juice
1-2 teaspoons of sugar, to taste (¼ to ½ ounce simple syrup are also okay)
1 egg white or 1 ounce packaged egg white (if you want it sourer you can halve the amount
Bitters (important garnish; I used Angostura)

Combine all of the ingredients, except the bitters or any other garnishes, in a cocktail shaker. Dry shake (shake without ice) to emulsify the egg white, especially if you are using white straight out of the egg. Add ice and shake very vigorously for as long as you can manage. Strain into a chilled cocktail glass. Wait a moment for a nice foam to form on top of the drink and add a few drops of bitters on top as a garnish.

My experience making the brandy sour was a mixed bag. It might be the oldest sour but I think there’s probably a reason that whiskey and gin have surpassed brandy in sours over the centuries. At least to my tastebuds right now, there’s something about French brandy that makes it a less cozy companion to fresh sour (cocktail-ese for fresh squeezed lemon juice and sweetener).

I don’t know whether it was the particular box of packaged pasteurized egg white or some kind of chemical reaction with the brandies I was using, but I was having a hard time getting a pretty head of foam. In the past, I’ve never been able to see any taste improvement gained by taking the admittedly very small but real risk of using unpasteurized fresh egg white. However, this time it seemed like the only way to guarantee the foam so important to the presentation aspect of any eggwhite-containing sour.

Moving on to the booze, I was reasonably happy with the way the brandy sour worked out with Reynal, my go-to value-priced French brandy. Only a tad more expensive, I found that the spicier in flavor, if fairly young, De Luze VS Cognac made for a more balanced and satisfying drink.

Finally, I wanted to try some of the American brandies I used for my corpse reviver variation last time. Laird’s Straight Apple Brandy tastes nothing like your kid’s apple juice box but, sad to say, it made for a pretty lousy brandy sour. 100 proof Christian Brothers Sacred Bond, on the other hand, was very good. Probably the richest tasting brandy sour and the extra alcoholic power did the drink (and the drinker) no harm.