Trending
You are at:Home»Vices»Drink of the Week: The American Corpse Reviver 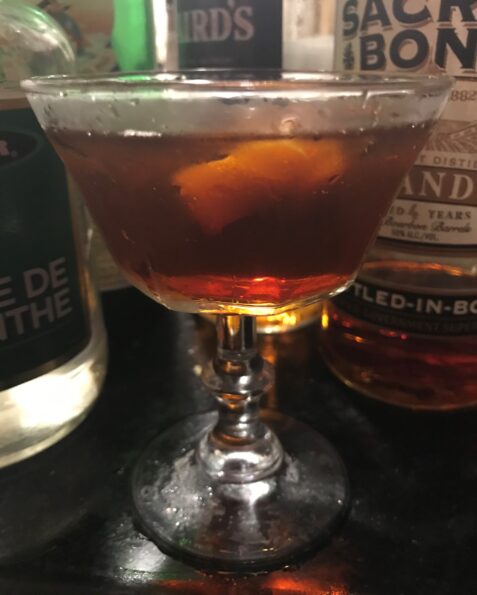 If you’re online as much as I am, and you shouldn’t be, then you’ve likely seen thousands of tweets and/or Facebook posts in recent years that go something like this: “I’m calling it. America died today.” I’m not a fan of this kind of sentiment. Pessimism and cynicism played a huge part in getting us into our national embrace of a nihilistic death cult and they remain the bad guys’ second most effective weapon following blind hatred.

To clean out toxic mental sludge and in socially distanced celebration of living to fight another day, I present my variation of the drink sometimes known as the Corpse Reviver #3 or the Savoy Corpse Reviver. My version switches out the fancy foreign brandy or cognac for some good American brandies, primarily but not exclusively apple brandy. Like all of the drinks with the Corpse Reviver name, it was originally consumed as an alleged morning pick-me-up. Each to their own. A drink this strong in the morning for me would be a drop-me-down. At night, however, it can remind you that being alive has its upside.

Fill a cocktail shaker or mixing glass with lots of ice and add all the liquid ingredients. Stir vigorously until you’re tired of stirring and strain into a chilled cocktail glass. Add the orange peel twist, sip, and appreciate the gift of not being a corpse.

The beauty of this species of Corpse Reviver derives largely from its least drinkable ingredient, Fernet-Branca. The legendarily hard-edged amaro makes a strong foil for super sweet, super minty, crème de menthe. It turns what would otherwise be a stinger into a beverage with enough sting to wake you up just a bit, which I suppose is where the alleged pick-me-up factor comes in. Also, amaros (a type of digestif) are maybe still thought be some to have medicinal qualities thanks to their high herbal content. (Geek note: Fernet-Branca is the beverage Alfred Pennyworth sips at the Roman café in The Dark Knight Rises.)

On to the brands. Laird’s Straight Apple Brandy is the go-to American brandy for cocktails and is one of the oldest of all American spirits. George Washington and Mr. Laird were acquainted. At 100 proof, it held up its end and made for a sturdy and flavorful beverage with an apple note or two emerging amidst the mint and the Fernet’s insanity. Laird’s recently introduced and somewhat less expensive Straight Applejack 86, which is said to resemble the applejack brandy most widely consumed in America during the cocktail heyday of the late 19th and early 20th century, put up a decent fight despite the lower proof.

I also tried my Corpse Reviver variation with one of my favorite newer old-style products, Christian Brothers Sacred Bond. It’s a bourbonish 100 proof brandy made from good ol’ California wine though it tastes more like the California of the Gold Rush than the California of wine and cheese pairings in Napa. It was pretty freaking extraordinary. Sweet but with a strong base that made for a stereophonic flavor experience. Not remotely a resurrection, but it’s good enough to put you in touch with the idea that it’s nice to be alive and, if we’re really lucky, free.