Trending
You are at:Home»Vices»Drink of the Week: The Holy Joe Cocktail 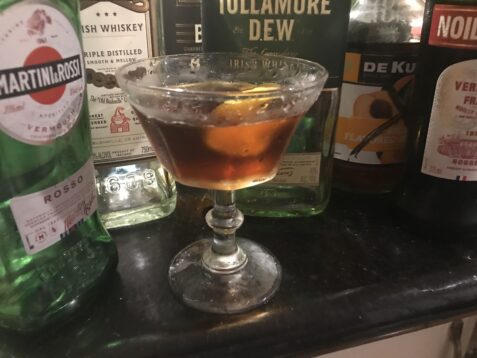 The Holy Joe Cocktail appeared in print in late December of 2016 as the world took a long, slow ride up a demonic orange rollercoaster. Meanwhile, John Robinson of The Hive restaurant in Bentonville, Arkansas, was making people feel better with a lovely beverage cataloged in Imbibe.

As you might guess, my selection of the Holy Joe this particular week is not a coincidence.  “Don’t compare me to the Almighty. Compare me to the alternative,” says president #46. He wasn’t my first, second, third, or fourth choice in the primaries but, I have to say, in comparison to his his foul predecessor, “holy”  doesn’t seem wholly wrong.

Combine all the liquid ingredients in a cocktail shaker or mixing glass with lots of ice. Stir vigorously and strain into a chilled medium size cocktail glass. Run the shiny side of a lemon peel slice (about the size of a bandaid) along the rim of the glass, twist the peel over the center of the glass so that the oils from the peel drift onto the drink. Sip and contemplate just how lucky we are (for now).

I have to give the proverbial mad props to John Robinson for this. It’s sweet and fruity with a nice bitter kick provided by the Cynar. Still, not everyone loves that delayed bitter kick — the in-house guinea pig begged off this one. The Holy Joe   doesn’t quite have  the Negroni‘s roundhouse punch of post-sweet bitterness, it’s a more subtle and balanced concoction. If you wish, you can tone it down further by switching out the Cynar for a slightly milder amaro.

Though Mr. Robinson’s version of the Holy Joe was fairly specific in terms of brands, I found this one worked well with almost every combination of brands/expressions I tried – and the drink only grew on me over the week, even though the only apricot liqueur I used on it was a little bit worse than mediocre. I can only imagine how much better it would be with the Marie Brizard or Rothman & Winter liqueur I thought I had in the house. I did try the Holy Joe with Mathilde’s great peach liqueur. Meh. Stick with apricot.

As for the base spirit, I killed several bottles of Irish whiskey I had on hand that had just about 1 ½ ounces left in them, as luck would have it. One of the best featured Concannon and Noilly Pratt sweet vermouth, though that’s no dig on the bottle of Martini I also used for this drink. Bushmill’s, Bushmill’s Red Bush, Tullamore Dew, and Proper 12 (not my favorite), all mixed beautifully, especially the plain Bushmill’s. When I also killed my bottle of Cynar, I switched over to Amaro Abano, where the bittersweetness is a bit more simultaneous and, combined with Jameson Black Barrel it was still a wonderfully balanced beverage.

Fingers crossed, people. For the next four years, let’s use our good American heads and not let anyone make suckers out of us.