Trending
You are at:Home»Vices»Drink of the Week: The Prairie Oyster

I had to get to the prairie oyster eventually because of it’s overall cocktail notoriety. It’s also a frequent trope in 20th-century movie hangover scenes – Cabaret gets mentioned the most. Also, how many opportunities am I going to get to write about the hoariest hangover remedy of all on a post that goes live on January 1, aka International Hangover Day? None of this means it’s something you’d want to drink because it tastes good or even just to get a buzz-on. The best version of this drink doesn’t even have any alcohol.

Not to be confused with the bull gonad-based appetizer sometimes called Rocky Mountain oysters – the prairie oyster is generally prescribed to fight the morning after heebie-jeebies by bartenders, wise aunts, best friends, and the occasional Berlin-based vixen. The key ingredient is raw egg yolk or whole egg, which is where most people jump off the train.

I’m possibly the first person to down three prairie oysters in one night while initially being stone-cold sober. Nothing really bad happened, but there was no booze buzz and a general feeling of bleh. The concoction is intended to be downed in one-gulp which is probably the only way most people can finish it.

Combine all of the ingredients, except the yolk, in a cocktail shaker with ice. Place your unbroken egg yolk in a cocktail or old-fashion glass. Shake the non-egg ingredients vigorously and strain them over the yolk. 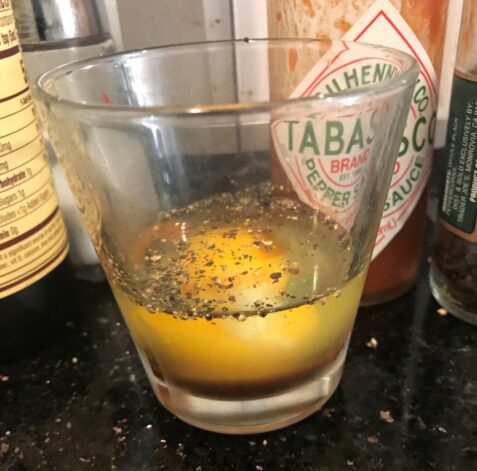 Prairie Oyster (nonalcoholic, as suggested by David Wondrich and others)

Put all of the ingredients in an old-fashioned glass and bottoms up!

Okay, so this is one occasion when I’m for sure not going to play the “which brand is it best with?” game. I used my usual Reynal French brandy and a more expensive cognac I shouldn’t have bothered with. I’m weirdly fixated on savory cocktails and even I found the boozy prairie oyster pretty unpleasurable. I liked it best when I just sipped the liquid portion and tossed the yolk – not because I have an aversion to raw eggs, quite the contrary. However, after three raw eggs in a single night, #4 is probably just a bad idea.

The next morning I wasn’t hungover but I had the nonalcoholic recipe anyway. It’s…refreshing? Anyhow, if you’re okay with the ingredients, you won’t mind it much.

Does the prairie oyster work? How would I know? I’ve never even had a proper hangover, thanks to a body that just won’t let me go that far in my middle years and an apparent iron constitution in my younger days. I do know, on the other hand, that what you need after a night of booze excess is hydration and a little nutrition. A beverage rich in sodium might be good because it encourages further hydration and it’s got some potassium, too. What you don’t need is any more alcohol. I recommend a bloody Mary, hold the vodka.