Trending
You are at:Home»Vices»Drink of the Week: The Disneyfied Manhattan or The Space Mountain Cocktail 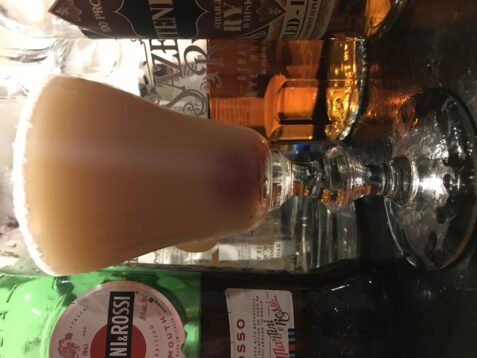 Today’s DOTW is the first I’ve done in some time I can take a little credit for. One night recently, I stumbled over Difford’s guide recipe for The Mountain Cocktail. The article described it as “a perfect Manhattan smoothed by egg white.” (For cocktail newbies, a Perfect Manhattan is just like a regular Manhattan except that it employs dry vermouth as well as sweet vermouth in equal amounts.)

While the Mountain recipe seemed very dry for an egg white beverage, I thought maybe skipping the bitters (a must for standard Manhattans) would make it something other than mouth-puckeringly dry. I was wrong. I thought it was awful…but salvageable. The next move became obvious to me – make it more like a real perfect Manhattan, not less. Restore the bitters included in any self-respecting Manhattan but also add a bit of extra sweetener. The result was a spiffed-up Manhattan without the rough edges, the beverage equivalent of the 1990s-and-beyond cleaned-up geographical Manhattan often described as “Disneyfied.” Or, it could also be the Space Mountain Cocktail, heading into the stratosphere with sweetener and egg white. I came up with two names I sort of like.

The Disneyfied Manhattan or The Space Mountain Cocktail

Put everything but the cherry into a cocktail shaker. If you’re using egg white straight from the egg, shake first without ice to emulsify the viscous white into a froth. This step is very optional if you’re using packaged egg white, which is kind of pre-emulsified. Add ice and shake very vigorously for a decent amount of time (at least wait until you’re tired of doing it). Next, use a fine strainer to filter out the ice chunks while you pour your drink into a chilled cocktail glass. Add a cocktail cherry if you’ve got one.

I had fun killing a couple of bourbon bottles for this mountainous Manhattan. First on the sacrificial altar was Jim Beam Repeal Batch – surprisingly delicious in this beverage. Next to the gallows was Maker’s 46. It’s much better on its own than any bargain bourbon but it produced only a slightly smoother and richer cocktail.

The original Mountain called strictly for bourbon but I thought rye – less sweet and spicier in flavor –  would also be a good fit. 100 proof bottled-in-bond Rittenhouse had its sharp edges very nicely sanded down by the other ingredients. Sazerac Rye, which I picked up for less than $30.00 at my neighborhood Trader Joe’s, brought a superior balance between sharp, soft, sweet, dry, and bitter flavors.

Finally, a word about dry vermouth. Most widely available dry vermouths in the U.S. are actually “extra dry.” I gather this is a concession to American tastebuds that European vermouth makers have made. Around the time I was first getting into cocktails, the Noilly Pratt people had decided that we Americans had grown up enough for their original formula – and that was the brand of dry vermouth I first seriously bonded with. Sales must have dropped because, a few years later, Noilly Pratt’s extra-dry reappeared and the original formula disappeared from US shelves. Now something of a cult product, the original formula returned a couple of years ago but only in 750 ml bottles – not ideal unless you’re planning a Martini party.

Dolin’s is one of the very few widely available non-extra dry vermouths and one of the better dry vermouths of any type. I tried the Disneyfied Manhattan/Space Mountain once with the standard American extra-dry Martini vermouth. It had an odd edge that wasn’t terrible but was noticeably less good. I’d stick with Dolin’s or something similar.

Finally, I gave the drink a try one time as a regular, imperfect Manhattan with an entire ounce of sweet vermouth. That was a serious disappointment – milky Robitussin. Avoid.

NEWS FLASH — You can’t get to where this drink is made right now for obvious reasons but there actually is a Disneyfied Manhattan of sorts, as shown below. Two thoughts…where the hell was this last time I was at California Adventure? Second…I hope I don’t get sued.