Trending
You are at:Home»Vices»Drink of the Week: The Yellow Daisy 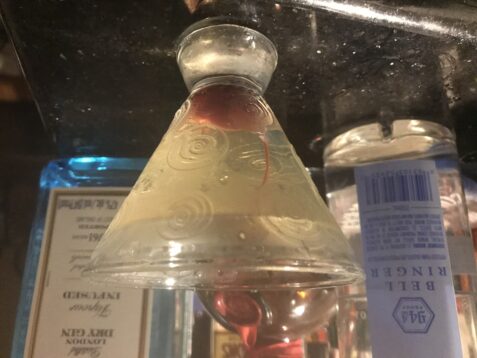 Today’s drink is a nicely balanced, somewhat sweet member of the martini-Manhattan family of cocktails. To my tastebuds, absolutely nothing about it says “cowpoke” or “frontier gunslinger” – it doesn’t even contain any rye,  the whiskey preference of countless grizzled old-timey movie cowpokes. Yet, The Savoy Cocktail Book tells us it was the favorite for British-immigrant Richard William Clark, one of several individuals claiming to have been the inspiration for Deadwood Dick, the literary creation of barely remembered dime-novelist Edward Lytton. Unlike Wild Bill Hickok, Calamity Jane, Buffalo Bill Cody, and the villainous Gen. George Custer – all of whom Clark appears to have associated himself – Clark and Deadwood Dick have made few appearances in popular culture.

A 1940 western serial turned Deadwood Dick into something of a Zorro-type character with a mild-mannered alter-ego. A variation of Richard Clark/Deadwood Dick turned up in a 1966 episode of Death Valley Days. He doesn’t even appear, as far as I can figure, in Deadwood! [Insert string of unprintable exclamations here, you mealy-mouthed c**********!) I suppose there’s a small chance that screenwriter David Webb Peoples was partly thinking of Richard Clark when he created the character of English Bob in Unforgiven, but probably not.

So, perhaps Richard Clark’s legacy in modern memory boils down to the Yellow Daisy. There are worse legacies (Gen. Custer’s comes to mind.)

Combine the ingredients in a cocktail mixing glass or shaker and stir vigorously. Strain into a chilled cocktail glass, and consider what you might leave behind for posterity.

I tried the Yellow Daisy with London dry-style gins Gordon’s, Bellringer, and Bombay Sapphire both with and without absinthe or my preferred substitute Herbsaint.  liked it better without the very strong liqueur. However, please take into account anise, which powers absinthe and Herbsaint,  just isn’t my jam, flavorwise — though you can’t make a Sazerac without and that by itself justifies its place in a liquor cabinet.

A word about the garnish — which is not found in any recipes I know of. It was just that, without the cherry, the picture would have been too dull That being said, it didn’t hurt the drink one bit even if the stem looks kind of creepy  in there..