Trending
You are at:Home»Vices»Drink of the Week: The Brainstorm 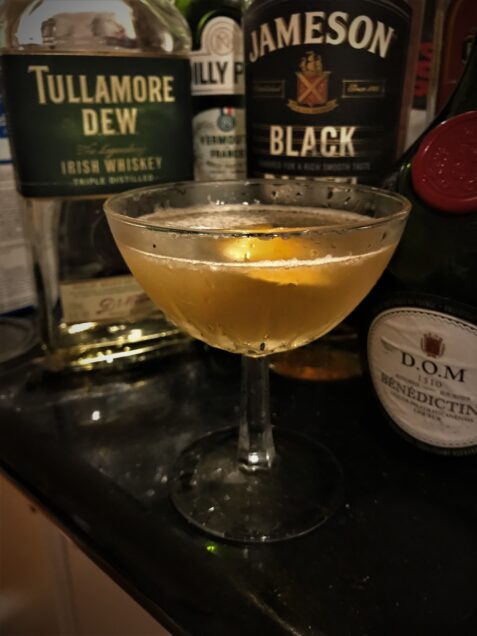 You don’t need me to tell you that this year will be no ordinary Thanksgiving. I’m not going the usual way with a rich and sweet autumnal beverage, either. I think an easy to make drink with not a lot of extra calories might be ideal in this year of many weight gains. Also, this is the drink I was already working on when I suddenly realized that this will be my final post before Turkey Day 2020.

Cocktail superhistorian David Wondrich thinks the Brainstorm is a superb after-dinner drink but I think its relative dryness, especially in his recipe, makes it a tasty way to get a good buzz on before the feast. Whenever you have it, it should make for a more relaxed evening in which to be thankful. It’s been a tough year filled with tragedy for many of us but, if you’re indoors and able to make cocktails, you surely have something to be thankful for.

(Note: The David Wondrich recipe also says you can build this drink on the rocks, especially for after dinner, but I haven’t tried that.)

The first time I made the Brainstorm I was using the recipe featured in The Fine Art of Mixing Drinks by mid-century cocktail-snob supreme David Embury. Instead of Irish whiskey, it called for rye and just dashes of Benedictine and vermouth. Much too severe for my taste. Since I was just about out of rye and had multiple partially empty bottles of Celtic brew ready for the slaughter, I stuck with Irish whiskey as my base spirit and the more generous non-hard-liquor proportions suggested in other recipes.

I should add here that the orange twist is important. The bittersweet tang you get when you run the shiny side around the rim of the glass and twist the peel over the drink to express the oils is the Lebowski rug that pulls the Brainstorm together. Without it, it’s a little dull.

Tullamore Dew came first. I have a lot of affection for that brand – the most popular Irish whiskey in Ireland – and it was an outstanding baseline that blended very nicely with the herbals contained in both the dry vermouth and the very sweet and rich Benedictine. Jameson Black Barrel brought some extra sturdiness and a tad more brown-sugar texture to the drink. Bushmill’s Red Bush isn’t a personal favorite and it seemed to drain the sweetness and light out of the Brainstorm.

I also tried using the higher proportion of ½ ounce each of dry vermouth and Benedictine with all of my Irish brands. Not surprisingly, it was a sweeter and more populist version of the drink. The in-house guinea pig preferred this recipe but I found it a little ordinary and a little too sweet.

Finally, we get to the whole shaken vs. stirred thing that has made James Bond the bane of so many irritated bartenders. In my years doing this, I have gradually come to the conclusion that the cocktailian conventional wisdom that one should only shake drinks with fruit juice is usually, but not always, right. The Brainstorm is one of the exceptions. This one just needs a little extra ice water in its veins to cool things down.