Trending
You are at:Home»Vices»Drink of the Week: The Wisconsin Old-Fashioned 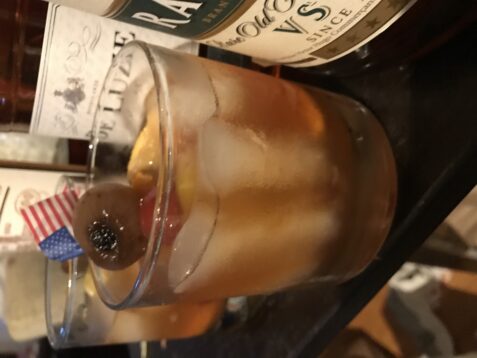 As history will record, on the night of November 3, 2020, the hope of a swift one-two punch of voter rage dissolved in a red mirage over Michigan, Pennsylvania, and Wisconsin. Suddenly, having the Wisconsin Old-Fashioned be my first post-election cocktail didn’t seem like such a clever idea. That night, I was drinking my brandy straight and skipping dinner. Another few nights like that and this week’s drink might have been lighter fluid with olives and a dash of opium extract.

Thank goodness and the #resistance, events took a much more positive turn as the week progressed. Today’s drink may not only be the cherry on top of belated good news, but also the pickled vegetable.

Put the orange slices and cocktail cherries in a large old fashioned/rocks glass together with the sugar and bitters. Muddle it all. The super-duper classic version calls for a sugar cube. If you’re using that or granulated sugar, you’ll want to muddle it a little harder than if you’re using the easily dissolved superfine sugar I had on hand.

Next, add ice and then pour your brandy over it. Stir well and top with a splash of cold lemon-lime or grapefruit soda such as 7-Up, Sprite, Squirt, etc. Finally, add your choice of garnishes – dare to be bold – and slurp away. It’s good and possibly nutritious.

****
My brandies this time around included Reynal, a first-rate value, and a very decent expression I tend to use as a baseline. I also went with a cognac, De Luze VS, which is outstanding for the under-$30.00 price tag with plenty of hard and spicy notes. My other bottle was a different kind of a bargain, a new favorite I’ve been gassing on about called Christian Brothers Sacred Bond brandy. At about $14.00 a bottle and marvelous in most cocktails, it’s miraculous, if not quite 100 proof proof of the Almighty’s existence. All of these brandies played a role in extremely fun beverages that had the edge of a spice-laden adult candy, but I must acknowledge the extra zing that came with the cognac and the Christian Brothers monster bargain.

Moving on, I mostly used the Angostura bitters most of the recipes specify but I couldn’t help but give a shot to Fee Brother’s aromatic bitters. The stronger cinnamon notes worked just fine and were not quite as dominant as I have found with these bitters in more standard old-fashioneds.

For the soda topping, I stuck with the obvious: 7-Up and Squirt. Both were fine but I lean very slightly towards the Uncola here. The Wisconsin Old-Fashioned is a sweet drink and I just wanted to lean into that. If you think that’s too sweet or want to shave a few empty calories off the drink, plain soda is also sometimes used. If you want to split the difference, some like the drink “pressed” with a dash of 7-Up and a dash of seltzer.

Your choice of cocktail cherries is more important than usual as two of them are ingredients as opposed to garnishes. The bright red Merry Maraschino  cherries from Tillen Farms I had in the house tasted good and looked striking, though I think their Bada-Bing Cherries are better yet.  I also used Copper & Kings brandied cherries which are outstanding and almost as good as the Luxardo cherrie I can’t really afford.

I could have left it there, garnish wise, but I had read that Wisconsin bars typically offer a choice of counterintuitive accompaniments. According to the cheesehead blogger who alerted me to all of this, olives and other pickled vegetables are a common alternative. If you’ve been reading me a lot you know I have no fear of odd flavor combinations.

And so I played around with multiple garnishes. An olive filled with blue cheese (not from Wisconsin) was heavenly. Garlic stuffed olives were more of a mixed blessing  – it worked when accompanied by a cherry but not with more than one….maybe not the best place for that much garlic. A mildly marinated shitake mushroom was a nice and mellow addition, I think my favorite outré choice was very small sweet-flavored onions soaked in balsamic vinegar.

It doesn’t end there with the garnishes. We’re told that some of the finer restaurant bars of Wisconsin will often use a pickled brussel sprout, which sounds great to me . I’m sure there are lots of other outstanding choices and I encourage you all to experiment with other savory garnishes – and don’t worry if your choices makes others wince. Others may loathe your weird garnishes but we should all fight for your right to enjoy them. Here’s to liberty!