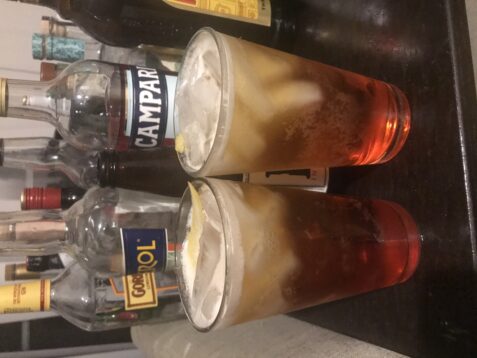 I have a very nice drink to end up my series of summer refreshers that may come in handy for you nervous folks, but first I should note that Drink of the Week is on a sort of semi-hiatus because — and I know some of you won’t buy this — there are things in the world more important than cocktails. Moreover, if we don’t do something about the nutsos who’ve grabbed this country for their own ends, I have reason to believe that prohibition will be making a comeback even as snortable non-prescription Adderal will be available to any Christian caucasian over 9 years old and for free. Fake news? Yes, of course — but if I can’t use this blog to start an idiotic conspiracy theory, what am I even doing on the Internet?

Oh, yeah, there’s a drink. I stumbled over the idea of making a spritzer out of an IPA and an aperitif in an article by Anjali Prasertong presenting a combo of Campari and an IPA. I opened the choice of ingredients up just a little

1 1/2 ounces Campari or Aperol (or maybe anoter digestif-liqueur)
6 ounces IPA beer….or maybe a lager or something else.
Lemon or orange twist (suggested garnish)

Start with a pint beer glass filled with ice. Add the Campari or Aperol. Next, add your beer very slowly and a beautiful head will develop. I found it easier to get that beautiful head when I first poured the beer into a measuring cup to get the amount right You can stir or not stir depending on whether you want a nice bitter-sweet mix or if you prefer to make your way to the chewy more candy-like center (I know, Campari is very bitter candy but it’s still sweet as hell). I think I generally prefer stirring. Twist a lemon or orange peel over the top of the drink to express the oils, and drop it in. Prepare to take the bitter with the sweet. Mostly the bitter from the IPA.

I stuck with Lagunitas IPA except for an anonymous lager that happened to be in my fridge — I don’t remember the name because I accidentally tossed the bottle but it sounded to me like the handle of the minor character from The Ring of the Nibelung. Honestly, the finished drink wasn’t bad at all. Indeed, I’ve noticed online that people are putting Campari in all kinds of brews. It’s an idea worth revisiting.

On the other hand,  I like bitter flavors but IPA beers are bit much for me and, though I love Campari in its entirety, it’s a bit much for a lot of people. So, not a surprise that using Aperol, Campari’s kinder, gentler cousin, did indeed take some of the rough edges off a drink that’s very refreshing but still not for everyone.