Trending
You are at:Home»Vices»Drink of the Week: The Rum Collins 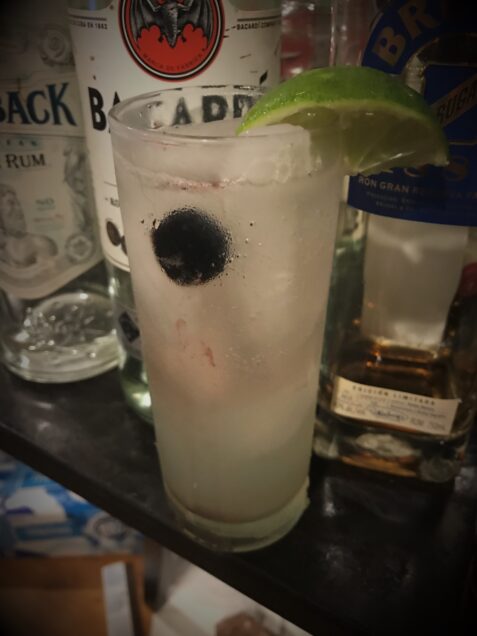 While the ridiculous LA area temps of Labor Day weekend are, thanks be to Jehovah, behind us LA LA landians for now, I’m nevertheless completing my scary heat-inspired trilogy of Collins cocktails and not just because of all the smoke we’re breathing now.

You don’t find a lot about rum-based Collins drinks online – though just about every piece I found mentions that James Bond and supervillain Emilio Largo knock back a couple in “Thunderball.” ­ I mentioned it myself in my rundown of the lucrative early James Bond flick several years back but, alas, in my quip about the proper construction of the drink, I mentioned lemon juice. I now know that every rum Collins recipe in creation calls for lime juice. The extra-sour edge of lime balances out the vanilla notes that most rums sport. We never stop learning.

As with the other Collins drinks, I found that the rum Collins is reasonably flexible in terms of your base spirit. Most recipes call for silver – aka blanco, white, or light – rum but I went off the reservation just a little bit.

Cocktail cherry and/or lime wedge (this week’s photo notwithstanding, I usually just use the cherry)

Combine all of the liquid ingredients but the soda in a cocktail shaker with lots of ice and shake very vigorously. Strain into a Collins/highball glass over fresh ice and top with soda water – some say chilled soda water is preferable and they might have a point. Add the garnish and prepare to get cool.

I started with Bacardi Superior Silver Rum as a value-priced baseline. (I dare them to release an even cheaper Bacardi Inferior Dingy Gray.) I also tried Cruzan Silver Aged Light Rum. These were both good using either my left-over Demerara sugar simple syrup or plain superfine sugar. While there’s nothing very exciting about plain Bacardi, the drink I had with it was just great. It was sweet and limey with the barest hint of that rum vanilla flavor and that was all it needed.

On the other hand, since whiskey works so well with the Collins formula, it seemed logical that the more aged, mellower, and complex rums would also be good. Bacoo 8-year-old was mostly what I expected, though the vanilla came through a bit more than I’d usually want. On the other hand, an older bottle of Brugal 1888 – a bit of a personal favorite with its bourbon and Scotch-like blend of flavors – worked maybe even better than a quality bourbon in a whiskey Collins. My second favorite of the bunch.

My final attempt was with Shellback Silver, a rum I admit to not loving because of – guess what – a little too much vanilla sweetness on the tongue. My in-house guinea pig caught the flavor and found that last rum Collins the least of the bunch. Perhaps because I was braced for something not so great, I was very pleasantly surprised; the lime juice and soda water had removed the excessive vanilla edge as far as I was concerned.