Trending
You are at:Home»Vices»Drink of the Week: The Whiskey Collins 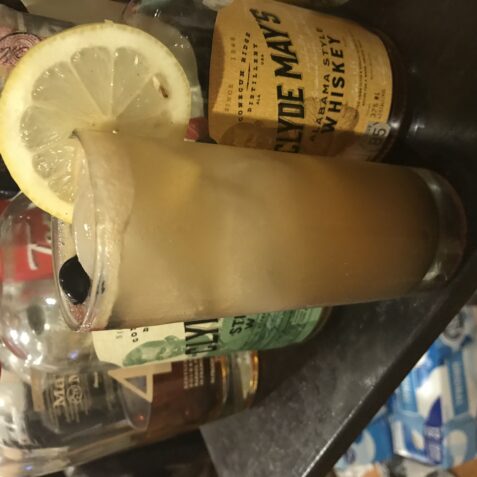 I wrote about the Tom Collins a couple of weeks back at the beginning of a very long heatwave here in the Greater Los Angeles area which finally ended  last weekend. Now, most of California has a newer and more ridiculous heatwave  pounding down upon us — and we’re hardly alone nationwide in terms of frighteningly hot. Happy Labor Day Weekend! Time for a refresher in refreshment.

I was originally going to go into more a discussion of why I’m calling this the whiskey Collins and not, as it’s sometimes called (with bourbon, anyhow), the John Collins. But, nah. David Wondrich covered all of that as well as he always covers everything and, very frankly, it’s a lot more interesting to make and then drink a bunch of Collins beverages than to detail the various Toms and Johns. So, it’s just the plain old Whiskey Collins.

Combine all of the liquid ingredients other than soda water in a cocktail shaker with lots of ice and strain into a Collins/highball glass or, if you don’t have that, a rocks glass will do. Top with soda water and add garnish.

I usually like to mess around with brands but, this time, I decided to mess around mostly with styles of whiskeys. Bourbon was represented by Maker’s Mark and Maker’s 46. Both are terrific but they kind of blended in and didn’t taste all that different from a Tom Collins made with gin. That seemed odd.

Rittenhouse Rye, one of my default brands, fought back against the lemon and sweetener very nicely and being 50 percent alcohol probably helped. Somewhat gentler but still very present was the newish Clyde Mays brand rye. I also tried this with Clyde Mays’ flagship product, their Alabama style whiskey which is similar to bourbon but is aged with apples. The sweet apple notes actually emerged to make for a lovely experience. I love this stuff.

Most interesting of all was Ballantine’s Scotch. My in-house guinea pig was on board with most of these drinks but really enjoyed this version. The relatively mild peaty/smokey flavor of this classic inexpensive Scotch made for a taste that was slightly less sweet but also slightly less sour, if that makes any sense. Maybe it was the smoke or the woody. leathery flavor you get in Scotch. It was bracing. Someday, I’d like to try it with a truly smokey Scotch like Johnny Walker Black or, better yet, Laphroaig.

One more thing. About half the time I was using superfine sugar and the other half I was using homemade Demerara simple syrup. If you’ve never had this type of sugar, beloved by fans of classic cocktails and now widely available here in California and maybe elsewhere from C&H, it’s similar to turbinado, aka raw sugar. It’s far from essential here but I do think it’s gentle molasses flavor added a little extra something to a few of this week’s libations…which, especially when it’s this hot, feel more like libations than usual.