Trending
You are at:Home»Lifestyle»Five of The Greatest Non-Footballing Moments to Happen at Wembley Stadium 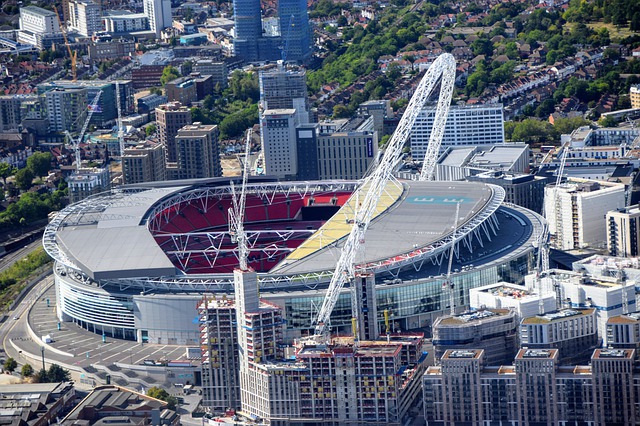 The hallowed turf at Wembley Stadium has played host to many of the most iconic moments in footballing history. Geoff Hurst fired in a famous hat-trick to hand England the World Cup, Paul Gascoigne put Scotland to the sword with a stunning strike and all manner of dramatic FA Cup finals were decided there. Yet Wembley has also hosted a number of exciting non-footballing moments during its illustrious history:

Wembley took centre stage when London first hosted the Olympic Games in 1948. It marked the end of a 12-year hiatus for the Games, caused by the outbreak of World War II, and allowed the world to unite under the banner of sporting excellence. A record 59 nations were represented, and 4,104 athletes descended upon London to view for glory. Wembley was chosen to host athletics, show jumping, football and field hockey.

The star of the show was Dutch sprinter Fanny Blankers-Koen, dubbed “The Flying Housewife” after she won four gold medals. The mother-of-two surged to victory in the 100m, the 200m, the 80m high hurdles and the 4x100m relay. She should have earned more gold medals, as she was the world record holder for both the long jump and the high jump at the time, but women were only allowed to compete in three individual events back then. Blankers-Koen became the first Dutch athlete to win an Olympic title in athletics, and she was paraded around Amsterdam in a horse-drawn carriage to celebrate her achievements.

The world’s most famous daredevil headed to Wembley to attempt his most ambitious stunt in 1975. The American stuntman, whose real name was Robert Craig Knievel, lined up 13 double-decker London buses and tried to jump over them on his motorbike. Some 90,000 fans packed into Wembley to watch his stunt, and they reported a tense atmosphere as he revved up his engine.

Knievel came agonisingly close to clearing the final bus, but he ultimately crash-landed, ended up in a heap and broke his pelvis. It was just one of many broken bones for Knievel during his high-profile career, which saw him attempt more than 75 motorcycle jumps. He holds the record for the most broken bones in history, with 433, following several disastrous stunts, but his bank balance was a lot healthier than his body.

The great Muhammad Ali fought at Wembley en route to becoming arguably the greatest sportsman of all time. The 1963 bout pitted the American heavyweight against local hero Henry Cooper. Back then he was still known as Cassius Clay, and he boasted an 18-0 record. Ali told the press that he was only in London as a warm-up for a title clash with Sonny Liston. He was the clear favourite to secure victory, but things did not entirely go to plan for the great man.

As the fourth round wound down, Cooper caught Clay with an absolute peach of a left hook, sending him clattering to the canvas. Controversy ensued, as Clay’s trainer – the legendary Angelo Dundee illegally used smelling salts to help his fighter regain his senses, and made a small tear in one of Ali’s gloves, forcing a welcome delay while a new pair were sought. That gave Ali enough time to recover, and he went on to win the fight, although Cooper could clearly feel aggrieved at the nature of his defeat. He came close to making Ali eat his words, and it ranks as one of the greatest fights in British boxing history, alongside Benn vs. Eubank, Lennox vs. Bruno and others mentioned in this spread betting blog.

One of the greatest Challenge Cup finals in history took place at Wembley in 1968. Yorkshire rivals Leeds and Wakefield Trinity locked horns in the big game, and it coincided with the mother of all downpours. The authorities took the questionable decision to press ahead with the final, and it turned into an absolute mud bath.

Yet the players got stuck in, slipping and sliding all over the pitch as they struggled to hold onto the ball. Leeds built up a narrow lead and looked set to close out a hard-fought victory when Wakefield winger Ken Hirst broke through the opposition ranks and cross for a dramatic, last-gasp try. Prop Don Fox, playing his final game before retirement, simply had to convert to hand his team the victory, but he sliced his kick horribly wide and Leeds lifted the trophy.

We Will Rock You

Wembley has also hosted hundreds of major concerts over the years, and its crowning glory saw Queen take to the stage at Live Aid in 1985. The quartet’s popularity was waning at the time, but their performance catapulted them to superstardom, thanks largely to the energy that frontman Freddie Mercury displayed. It is fondly remembered as one of the great live performances in history, and it kick-started the trend for bands to play to tens of thousands of screaming fans at packed arenas.