Trending
You are at:Home»Vices»Drink of the Week: The Lion’s Tail 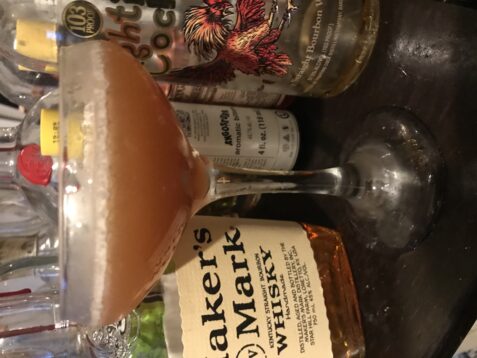 Today’s drink is another one of the many cocktails unearthed during the 2000s by famed cocktail revivalist and fellow Angeleno Ted “Dr. Cocktail” Haigh (pronounced, I just learned, “Hay”). His book, Vintage Spirits and Forgotten Cocktail, is easily one of the most important touchstones of the 21st century cocktail revival and it’s notable for  its outstanding early 20th-century style design. That makes sense because  these days it look as if Dr. Haigh spends nearly all his time as an award-winning graphic designer for movies and television, much of it with a strong period-flavor, including the booze-driven Boardwalk Empire HBO series and 2007’s horny-teenager masterpiece, SuperbadI, in which, per IMDb, he had a cameo as a bartender.

I mention this largely because I’m getting to the point where I’ve covered most of the drinks in Doc Cocktail’s book, except for those containing Swedish Punsch, one of the few once forgotten liqueurs that remain difficult to get hold of without paying high shipping costs, even here in cosmopolitan Los Angeles.

For its’s part, the Lion’s Tail contains allspice dram, a product Haigh tells us he was actually involved in getting back on the market between the first and second editions of his book. Today, you can pick up St. Elizabeth’s Allspice Dram at pretty much any big box liquor store in the LA area and I’m guessing elsewhere.

The Lion’s Tail itself is traced back to a 1937 cocktail book from the UK. The consensus seems to be that the drink’s name is something of a joke about Anglo-American relations pre-World War II, The phrase “twisting the Lion’s tail” was an expression for, I gather, being mean to the English.

I’m going to give you Haigh’s original recipe here because, obviously, a lot of people like his version. Even my non-cocktailian in-house guinea pig was fond of it. I, on the other hand, found it’s key ingredient overpowering in the suggested proportion, but nothing good is for everyone and this time I might be the not-everyone. Still, this is a story with a happy ending.

Combine all of the ingredients in a cocktail shaker. Shake vigorously and strain into a chilled, medium size (5 ounce, if possible) cocktail glass. Get ready for something that’s going to roar like a less than extremely polite British lion.

So, as I said, I liked this drink a lot better with less allspice dram. It’s a wonderful cocktail ingredient but a little goes a long way. It tastes like Christmas with a strong pine-like flavor from the allspice. A little not only goes a long way but I’m not sure it’s the best possible combination with lime. I also goosed up the simple syrup from the original half a tablespoon to 2/3 of one (i.e., two teaspoons).  It helped.

From that point on, I tried the Lion’s Tail with a number of different bourbons but, to be perfectly honest, most of them were still buried under the flavor onslaught of the dram, though pleasantly enough.  One exception was Fighting Cock 103, which remains a  mighty and reasonably priced entry in the bourbon field with a flavor that can pretty much hold its own against anything. Finally, not expecting much, I pulled out the high quality heavy artillery and went with Maker’s 46 which I recently splurged on. Suddenly, the allspice dram was in harmony with the lime juice, the heavens opened up….and it was time to find a new drink to explore.