Trending
You are at:Home»Vices»Drink of the Week: Aqua Epidemica Vondricii 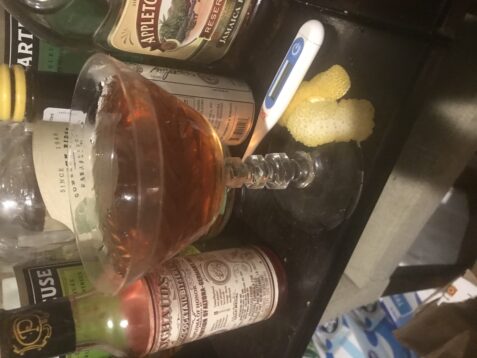 Hey wanna drink some plague waters? There were medicinal beverages once upon a time with that very name, though you have to wonder about medieval marketing strategies. “Plague Waters” sounds like there’s actual plague in the water! Call them Health and Wellness Waters for God’s sake!

Back in April, cocktail historian and uber-expert David Wondrich wrote for The Daily Beast  about plague waters and how folks during the Black Death were ready to try anything with a bit of alcohol and odd herbals because that made about as much sense as anything else. He has followed that up with a very good recipe/template inspired by these drinks with a Latinized name that you don’t need to be a classics scholar to suss out. It might not cure what ails you but it might be just what the doctor ordered when the stresses of the moment are little too much.

Combine all the liquid ingredients in a cocktail shaker or mixing glass with lots of ice. Stir very vigorously and for as long as you can stand, and strain into a chilled cocktail glass. Next, run a wafer thin slice of lemon peel around the edge of the glass and twist it over the drink to express the peel’s oils into the beverage. Wondrich says you should then toss it aside rather than dropping it into the drink. It might seem hard to believe but those all but invisible citrus oils make the drink notably better.

Since this drink is as much a template as a recipe, you could spend years running through all the permutations Mr. Wondrich suggests. And those would be repetitive but not horrible years as most of the iterations of the AEV I tried turned out great, though the ingredient choices matter a lot.

I stuck with Martini sweet vermouth, but tried Appleton Estate Aged Rum, Hennessy Cognac, Rittenhouse Rye, as well as Clyde May’s Rye. All were very good though I thought Appleton and Clyde Mays may have done the best. As for the herbal liqueur, I have plenty in my liquor cabinet and could have really gone to town there, but I stuck with Chartreuse. The Green Chartreuse goes better with rye than with brandy but I generally preferred the lighter Yellow Chartreuse overall.

Strangely enough, bourbon was the first type of liquor that Wondrich suggested but when I tried it with Maker’s 46 having good luck with various ryes, it was much too sweet for me. I wouldn’t rule out other bourbons, but my experience dampened my interest in trying any other brands,

Let’s talk about bitters. This recipe calls for about three times more of them than most drinks, surely to compensate for the relatively large amount of sweet vermouth. I slightly prefer the lighter, fruitier Peychaud’s Bitters in the Aqua Epidemica Vondricii but Angostura works almost as great and adds a bit of heft. Going half and half on the Ango and Peychauds is not the worst solution if you’re at all unsure.

Tags: cocktails, Drink of the Week