Trending
You are at:Home»Vices»Drink of the Week: The Aztec’s Mark 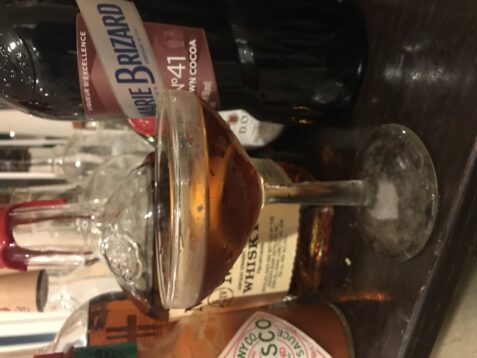 My cocktail tastes sometimes run towards the outré, you might even say the perverse. You could also say I like weird drinks.

I’m always curious about cocktails that have maybe one or two out-of-the-ordinary ingredients in them. A Bullshot made with vodka and Campbell’s concentrated beef broth? Most may shudder but my mouth waters at the thought of something cold and savory. It’s a little too much trouble for DOTW’s easygoing ethos but, should I ever find myself at a bar featuring The Beer, Bourbon, and Barbecue Cocktail, no force on the planet could stop me from ordering it.

This one isn’t quite that out of the ordinary but the legendary author and superbartender who popularized it was skeptical at first. Created by San Francisco bartender Neyah White and discovered and disseminated by the sadly departed Gaz Regan, the Aztec’s Mark is a sweet treat with some added heat that’s not entirely alcoholic in origin. It’s nifty! It’s also not nearly as weird as you might think.

Combine all of the liquid ingredients in a cocktail shaker or mixing glass and stir. Strain into a chilled cocktail glass, rim the glass with the back of the orange peel and twist it over the glass to express the oils into drink. Sip and appreciate the combination of chocolately goodness with a spicy hot undercurrent against the sweetness of chocolate. Yum.

I made the Aztec’s Mark with both regular Makers and the super-superb Maker’s 46, both of which worked great though less expensive original Makers may have been slightly superior in this context. Fighting Cock 103 is also very highly recommended.

Perhaps more important is your choice of creme de cacao. A standard, less expensive choice like DeKuyper’s gives you a very nice drink. Nevertheless, going up a small and not very expensive step in class with Marie Brizard made for an extra nice sweet-hot drink. I would have tried another type of hot sauce than Tabasco but the bottle of Crystal I had on hand just wouldn’t do drops and, trust me,  a dash would taste like Quetzalcoatl’s revenge on humanity.

But here’s the real trick. In what I now think is a typo, the version of the drink featured in Regan’s epochal Joy of Mixology, which is where I found the Aztec’s Mark, says to shake the drink. I hoped that maybe the late Gaz was being cheeky as cocktailian conventional wisdom is very clear that only drinks with juice are to be shaken. I figured he knew what he was doing and, while I’ve become much more of a stirrer than a shaker of non-juice cocktails in my old age, I took it as an invitation to shake away.

However, after looking at recipes online that said to stir the Aztec’s Mark — including in the original article in which Regan praised the drink, I obviously had to try it that way. It was fine so much better stirred. The shaken version really tastes almost entirely of chocolate with a slight edge, which is fine. The stirred version lets the bourbon into the party and it’s one hell of a festival.