Trending
You are at:Home»Vices»Drink of the Week: Mr. Pepper 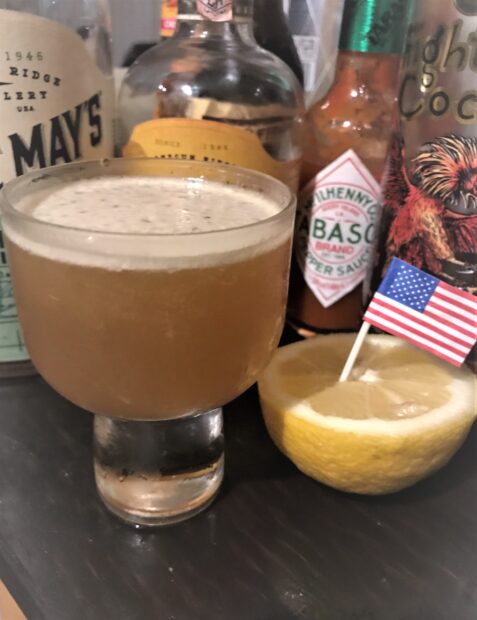 Just as I’m writing this the mayor of Los Angeles has cleared the beaches and at least technically banned pretty much all types of social festivities (well, if you live alone, anyway), and fireworks displays of any kind. Nevertheless, no law yet known can take away my right to bear armaments that explode in my mouth. And that brings me to this year’s Independence Day drink that is both sweet and hot as you like it.

Mr. Pepper comes to us from the people behind Clyde May’s Alabama Whiskey. Before the booze fairy gifted me with a bottle, I knew that most bourbon was from Kentucky, some of the best ryes are from Pennsylvania, and Tennessee whiskey is also a thing and not just Jack Daniels. Now that I know Alabama whiskey is a thing, on the strength of my experience with Clyde May’s I’m willing to say that it’s a category worth exploring even if there doesn’t seem to be a lot of competition.

It seems that Clyde May was a ‘Bama moonshiner who came up with the idea of adding apples to the aging process of a bourbon type of whiskey. As brewed legally by his apparent descendants, this relatively new brand is definitely worth its $30+ price tag, especially if you’re looking for a whiskey that’s just a hair different but which also mixes as nicely as any of your better quality bourbons.

As for the Mr. Pepper created by some anonymous but clever mixologist, it fills a niche most people never asked for but they should have. A sweet-hot bloody Mary sour, sans the tomato. If that sounds like something you’d like to try then you definitely want to try this.

Put all of the ingredients in a cocktail shaker with a lot of ice and shake vigorously for as long as you can stand. Strain into a chilled cocktail. Sip and wait for the heat and spicy flavors to sneak up on your tastebuds like a teenager with an M-80.

I have to admit that I fell in love with the idea of this drink on paper but, in reality, it’s a tantalizer refresher of a pick-me-up/chill-me-out. As always, your choice of products will make a big difference.

Regular readers know that I love mixing it up with booze brands but cocktails do not live by alcohol alone and this week I got to play with a bunch of different hot sauces. My refrigerator nearly always plays host to several brands, both Louisiana and Mexican style, so it wasn’t hard and the drink leaves plenty of room for experimentation. In terms of what I can find at my local supermarkets, on the other hand, Lea & Perrin’s is pretty much the only quality Worcestershire, so I had to stick with that.

Crystal is an outstanding, budget-friendly brand and it was just about perfect. It’s more expensive and better-known cousin, Tabasco, had a more pronounced flavor. I also loved the ruling queen of Mexican hot sauces, Cholula, which had some richness to it. Also interesting was Tapatio, super-inexpensive and super ubiquitous here in Southern California, which brought some not entirely unwelcome enchilada flavor to the fiesta. Finally, I forgot to add the Worcestershire sauce once or twice — only slightly less awesome.

Of course, the whiskey choices have an impact as well. Yes, the Clyde May’s Alabama whiskey was just about perfect with the balance of sweet, sour, and spicy hot flavors; it blended nicely but never entirely got lost in the mix with a smooth undercurrent that might offer a faint hint of caramel apples.

Using the Clyde Mays rye we looked at last week was substantially less outstanding in that it was less harmonious on the palette. The whiskey kind of hogged the stage slightly more than it should for this kind of a drink. though it was still likable. Much better was 103 proof Fighting Cock bourbon which definitely brought some fight to the drink in a good way — because it also brings some sweetness and some heat, though of the alcoholic type.

Have a happy one.