Trending
You are at:Home»Vices»Drink of the Week: The White Dragon 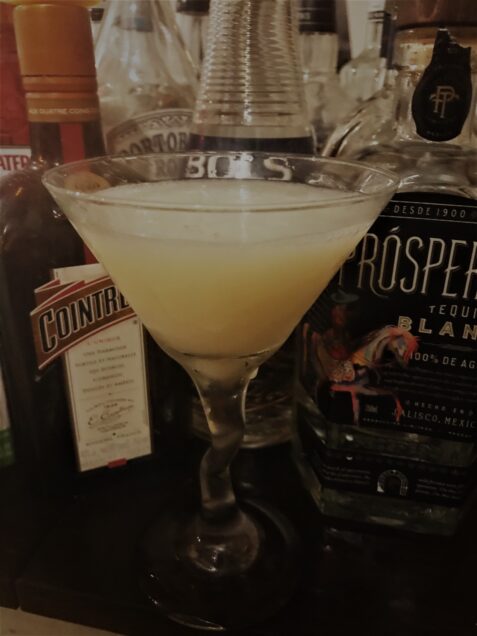 Some cocktails have mythic stories behind them, while a great many others simply started as promotions. That’s actually a good thing because the liquor companies and their mixologists — both famed and unknown — have every reason to come up with the best tasting mixed drinks possible.

The White Dragon appears to have been commissioned from widely admired Oregon-based bartender and author Jim Meehan. Meehan’s sponsor back in the mid-teens was Casa Dragones Blanco Tequila which I’m sure is excellent stuff — or at least it damn well ought to be about at $70-80 for a fifth.

Well, they didn’t send me any and it’s definitely out of my price range. Prospero Blanco Tequila, a brand that, at maybe less than half the price, is smooth and tasty enough to drink straight — no lime or salt required — did. So, it gets the honors of being the high-end selection in this week’s sophisticated but user-friendly offering. I’m looking forward to messing around with it some more.

Combined the non-garnish ingredients in a cocktail shaker. Shake without ice to properly emulsify the egg white so that the concoction is nicely milky and frothy. Next, add plenty of ice, shake very vigorously, and strain into a chilled cocktail glass. Finally, run the back end of the orange peel around the rim of the glass, twist it over the center to express the orange oils, and throw it away. Yes, it’s one of those drinks.  (And, yes, you can taste the difference.)

This is a drink that’s strong enough that the low-end version is only a little less good than the high-end, which is good news for a drink developed to highlight a specific brand. Sometimes they seem almost deliberately designed so that they are only good with their brand.

In this case, I used Prospero and Camarena silver tequilas and either Cointreau or Bols triple sec — a reasonably priced, reasonably good option. One recipe I saw online said simply “orange liqueur” and, while I have yet to find anyone willing to take a stand on just how curacao differs from triple sec, the of curacao-style brands I tried — including Grand Marnier (nearly as pricey as Cointreau) — didn’t work, with some spice-based flavors creating a disappointing miasma on the palette.

As cocktail snobs would predict, using the Prospero and Cointreau produced a really excellent sipping beverage. The agave flavors of the Prospero were definitely present but not remotely overpowering and the liqueur provided just enough sweetness to a balance out the lemon juice in conjunction with the egg white — though this is definitely a drink for people who don’t mind a little tartness. Going lower end with the Camarena and Bols was also pretty good, however, though my house guinea pig pointed  out that it was considerably less smooth if a tad sweeter. However, switching out the Cointreau for the Bols and bringing back the Prospero produced a sweeter, smoother drink that nevertheless slightly buried the agave flavor.