Trending
You are at:Home»Vices»Drink of the Week: The Formosa Fizz 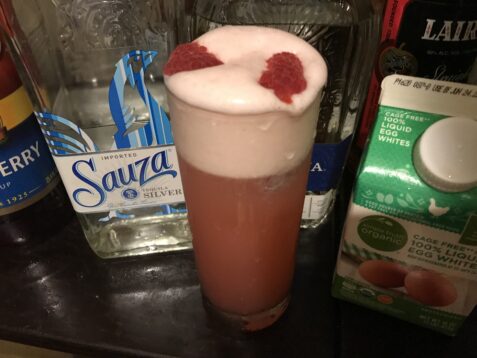 As the summer solstice fast approaches and the world warms, my mind is still on fizzes. This week, we’re doing a drink that was created by noted Portland-based super-bartender, cocktail author, and blogger, Jeffrey Morganthaler. My version of his Formosa Fizz varies from the original in a couple of ways which we’ll get to later. Inspired by the Clover Club — one of my all-time favorite drinks — It’s one of the few fizzes that uses tequila as its prime spirit and only booze. Not too surprising considering that most drinks in this genre precede prohibition and tequila didn’t really become a cocktail mainstay until the mid-to-late 20th century.

Morganthaler’s drink (as revised by me, anyway) is a light and refreshing drink that should not spark hangovers and which, if that’s your wont, might take the edge off of one as well. It’s one tasty hair of the dog.

Combine all of the ingredients except for the soda water and garnish in a cocktail shaker. “Dry shake” first without ice, especially if you are using fresh egg white straight from the egg. Add ice, shake very vigorously and strain into a chilled highball glass and top off with soda water. Wait for a minute for a head to form and, if you like, try to see if you can get the raspberries to float lightly on top like a food stylist at Imbibe somehow did flawlessly for their photo. Sip and appreciate the flavor and refreshment, if not the beauty of the drink itself.

I altered the Formosa Fizz for a couple of reasons. One is that I actually only have one of the very small highball glasses Morganthaler calls for. Small rocks glasses might have also worked, but the other reason I changed the recipe is just that it was a nice balance of sweet to tart but it was still just too much. That’s not a knock on one of the country’s most renowned mixologists but an acknowledgment that the raspberry syrup he uses in his bars most likely wasn’t Torani or Monin but house-made. I’m not sure if he actually used the relatively simple and I’m sure excellent syrup recipe Imbibe linked to but the reason you go to a good craft bar is because they take the trouble to make their own products and add other touches that make their drinks something you can’t easily duplicate at home. I’ve never been to one of his places, but I suspect that Morganthaler is to me as a world-class celebrity chef like is to your mom who you think is the world’s-greatest-cook. I’m a knowledgeable amateur writing for other, mostly less knowledgeable, amateurs. My mom put Lipton’s onion soup mix in everything. I use Torani syrups.

My solution to the excess sweetness issue was a simple one — I just added a lot more soda water and it cut the sweetness very nicely. It’s a simple tasting drink but an enjoyable, relatively light treat appropriate for lighter drinkers or anyone who doesn’t want a whole lotta booze in their beverage. And, if you really do have a hangover, the more hydration, the better.

I used two brands of tequila — Sauza Blue Silver and Camarena Silver. There wasn’t an enormous difference but I preferred the Camarena in this drink. The heavy agave flavor of the Sauza just stood out a bit more than I think the Formosa Fizz — or at least my version of it — calls for.