Trending
You are at:Home»Vices»Drink of the Week: The Delicious Sour 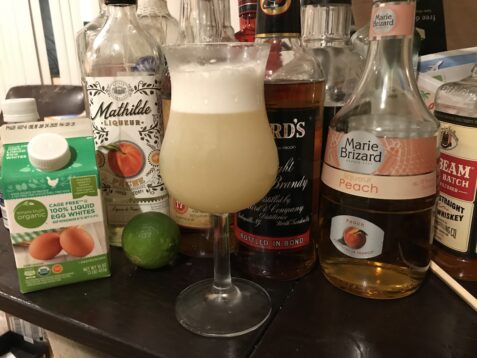 Many of the concoctions that mixed drink archaeologist Ted “Dr. Cocktail” Haigh unearthed in his seminal Vintage Drinks and Forgotten Cocktails are now anything but forgotten. Some, like the Corpse Reviver #2, have become staples.

Not so with the Delicious Sour. A clear ancestor of the mid-century tiki classics but just a hair less overpoweringly sweet, for my tastebuds it’s definitely a delicious sour, if not the delicious sour. It’s a shame it’s not better known.

There’s probably more than one reason for that. Not long ago, the Delicious Sour would have been a tough sell. Haigh obviously thought so, as the recipe for this drink in my 2009 edition of his book includes an extended explanation/defense of using raw egg white. It’s an argument I find myself making much less often these days as more and more people have experienced the wonders of egg white at a quality bar.

Then there was the base spirit, American apple brandy, aka applejack, was eclipsed by its daintier French cousin, calvados, for close to 80 years and, to this day, most people don’t even know there’s such as thing as apple brandy. Fortunately, the long and steady cocktail revival of the past thirty years has made American apple brandy from the Laird Company far easier to come by. This sour is just one of many great reasons to pick some of it up.

Combine all of the ingredients except the soda water in a cocktail shaker. First, shake without ice to fully emulsify the egg white, especially if you’re using egg white straight from the egg. Add ice and shake incredibly vigorously and strain into a very large, chilled cocktail glass or goblet. Top off with cold soda water right out of the fridge. Give it a moment to form a nice head and sip with appreciation.

This drink is actually a combination of a fairly typical type of sour with an egg-white containing fizz-type drink such as the Silver Fizz…which is maybe one reason I like using a bit more soda water than the original recipe suggests. Considering the amount of straight-up booze and very sweet liqueur in this drink, I think it cuts things very nicely. It’s frothy and refreshing in a way that belies its high alcohol content. It should come with a warning label.

As for the peachy liqueurs, I started with Marie Brizzard because their cocktail fixings are generally superior to what’s available from DeKuyper and the like. I also pick up Mathilde Peche, a French product I got for a mere $20 that’s pleasantly full-bodied and fruity enough that peach lovers might be tempted to sip the stuff straight.

The versions of the drink I made using the Marie Brizzard were just fine — even the first one when I forgot to include that very important teaspoon of superfine sugar. However, Mathilde’s more authentic tasting fruit really pushed the drink over the top when used with the 86 proof Laird’s. The best was yet to come. I combined the Mathilde with the very real kick of the 200-year-old, 100 proof Lairds and it totally rocked the house of me. It gave the drink a solid base that just completed the cocktail taste-wise while boosting the alcohol content notably.

Two provisos. My in-house guinea pig remained fairly unmoved by even that last home-run combo. No accounting for taste and all that. The other is that, as I alluded to earlier, this is a serious drink disguised as a refreshing libation. More than two could be deadly though you might feel ready for a third…definitely not more than three, okay? Caveat booze-or.