Trending
You are at:Home»Vices»Drink of the Week: The Blood Orange Unsour 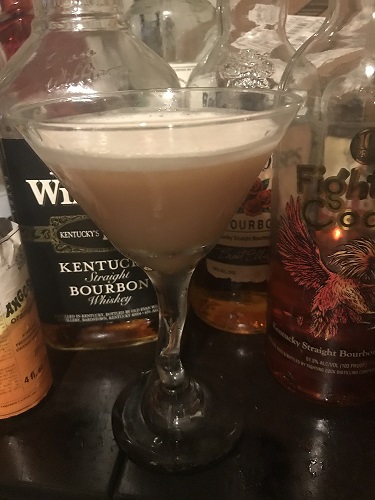 Blood oranges are in season which, among other things, is a good excuse to do a truly proper Blood and Sand, presumably named after a silent melodrama that blew the roof off of theaters back in 1922.  I addressed it way back in what seems like another universe in the year of 2014.

Last year, I created my own blood orange concoction inspired by another vintage film, this one with Mae Clarke rather than original it-boy Rudolf Valentino. Now, with a few of the of these tangier, darker oranges in my fridge, I set about to find something different. I  found the Blood Orange Flip, created by artist Kelly Carámbula and posted on Serious Eats way back in 2012.

The thing is, I don’t like misnomers and this is a drink made with egg white which means it’s very arguably not a proper flip. A flip is a class of drink which, at least in modern bartending, usually requires a whole egg (a stout ale is sometimes substituted). Egg whites are far more common cocktail ingredients — and are most frequently used in sours to cut the tartness of the lemon or lime juice, such as in my preferred version of the Whiskey Sour. I also was slightly under enthusiastic about Carámbula’s flip because her original recipe was a little too sweet-sounding, the honey syrup it called for a little too difficult to make, and it was about half-an-ounce shy of my preferred amount of spirits. I’ve corrected all of these “deficiencies.” (I’m sure her drink is just great when she makes it.)

I guess I could have just called my version of the drink the Bourbon Blood Orange Sour but blood oranges aren’t really sour, even if they are less sweet than a typical orange. So, I’ve settled on calling my variation an unsour. I think it’s pretty awesome and strong enough to cut through those COVID-19 social isolation blues, yeah, yeah.

Combine the ingredients in a cocktail shaker. Especially if you’re using a fresh egg white and not the pasteurized package variety, shake it without ice to fully emulsify the white. Next, add lots of ice and agitate it again as vigorously as you can manage. Strain into a chilled cocktail glass of a decent size. Sip and appreciate whatever level of health and wealth allows you to own the ingredients in this week’s drink.

I suppose I should give the original Blood Orange Flip a try but I like my unsour, so I’m just not feeling very motivated. The Blood Orange Unsour is like a classic egg white whiskey sour without much sour but with a full-bodied flavor that changes with your choices of ingredient — which in this case is more good than bad.

One big factor is that there’s actually a great deal of variability in the color of blood oranges and, I gather, one strain is darker than the other but the supermarkets just seem to stock whatever they get. I blew my shot at taking a picture with the darker type of blood orange juice, which is pretty much indistinguishable from grape juice, visually speaking. Even so, this isn’t the most attractive drink whichever color of blood orange juice you use but it’s an article of my faith that taste trumps beauty in cocktails.

I tried doing this one with some good rye whiskeys in place of bourbon but the result just didn’t come together for me. Somehow the peppery, slightly drier rye notes just kind of drained the fun and flavor out of the Unsour.

Though a bourbon, the Jim Beam Repeal Batch was a definite disappointment for a product I kind of enjoy. The spiky flavors just dominated in a way that wasn’t that flattering. Otherwise, though, bourbons worked brilliantly.

Using Evan Williams basic bourbon — not quite a first class whiskey but definitely one of your best bourbon values — and agave nectar it’s a refreshing treat, sweet as candy for grownups. With Four Roses, it’s a bit more mature and mellow in flavor, but still a sweet treat with a mellow, slightly woody undertaste, if I remember right and it worked with either agave or the slightly less sweet rich demerara syrup (using 2:1 sugar to water).

The house guinea pig preferred that Evan Williams version but 103 proof Fighting Cock Bourbon just rocked the house of my tastebuds, with the slightly biting fiery but tasty flavor pecking at the other flavors just enough to make them fight back. It was way better than nifty.