Trending
You are at:Home»Vices»Drink of the Week: Judge Jr. 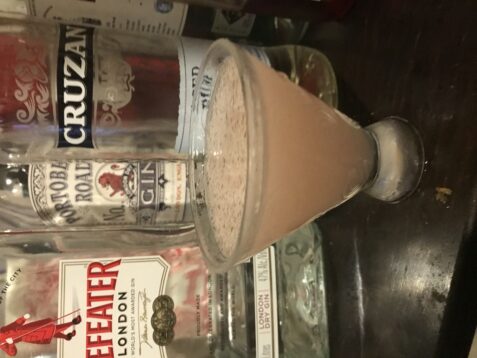 I’m not really sure you could say there’s any kind of a theme to the trio of egg-white free sours I’m wrapping up today. We do have a bit more of an inkling, though, about where this drink might come compared to our fabulous prior beverage, known simply as Junior. As far as I can tell, Judge Jr. was the name — or perhaps the nom de booze — of a reasonably well-known bartender who included the drink in his short prohibition-era cocktail book, Here’s How! (You can read the whole thing, free of charge and with page-turning sound-effects, on the internets.)

I assume Mr. Judge Jr. was joking when he claimed the drink wasn’t named for him.  In fact, each page of the book offers jokey toasts and sayings that haven’t aged particularly well. For example “Here’s to our sons in college; you have to make allowances for them!” or “Here’s to the blonde; we love her henna-way.” And prohibition makes many appearances — this one is one is below a pre-Snoop Dog gin-and-juice recipe: “A great many night club guests don’t wait for the raid to go under the table.” The best thing you can say about them is they are you dad’s dad’s dad’s dad jokes. Fortunately, this week’s drink has held up a bit better.

Combine all the ingredients in a cocktail shaker. Shake vigorously and strain into a well-chilled glass. Sip and consider how lucky you are to have this drink and not to have read any more of Judge, Jr’s jokes.

I must be changing because a drink with this little sweetener and this much lemon juice would have probably been too tart for my tastebuds years ago. Now, I think it’s a refreshing and not-too boozy drink and, in most versions anyways, a teaspoon of sugar and a speck of not-home-made but decent grenadine was all the sweetness I needed. I also liked the faintly pink tone the grenadine provides. The household guinea pig was also quite okay with it.

There’s plenty of mixological fun to be had here, with the plethora of decent gins and light-tasting rums available to anyone willing to pay. I messed around with Beefeater, my current big-ass default gin bottle, Beefeater 24 (it’s toney cousin), and a new favorite, gin, Portobello Road. The latter has a strangely sweet flavor for a London dry; in any case, it mixes beautifully and I can’t wait to try it in a G&T some time. My rums were Bacardi, Brugal Especiale Extra Dry, and Cruzan Aged, which has been sitting in my over-stocked liquor closets for years. I’ve forgotten how good it is. It’s been sitting untouched for so long, I can’t remember how I got it or what I’ve used it for previously.

Every combo did produce a slightly different flavor but it’s really the lemon juice and slightly sweet flavors that predominate. While regular Beefeater performed admirably with all the rums — especially the Cruzan — Beefeater 24, was shockingly below par considering how much I like it generally; something in it was canceling out the subtle sweet notes. Could it be the much-touted Japanese tea leaves that are among its herbals? On the other hand, Portobello Road simply rocked the house. It was not the same sweetness, exactly, I noted when drinking it straight, but this Judge, Jr. was beautifully balanced and tree lightly on the tongue — especially when it was joined on the teeter-totter by the elder Cruzan.