Trending
You are at:Home»Vices»Drink of the Week: The Junior 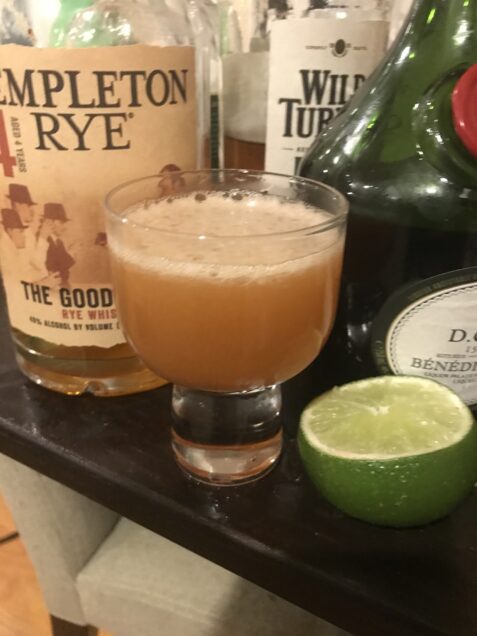 Last week we explored a tasty variation on a classic theme with the Frisco Sour. Now it’s time for the Junior, a variation on that variation that I think is one of the best cocktails I’ve made in terms of its flavor balanced against its simplicity. Being easy to make is no small virtue.

Nobody seems to know why the Frisco Sour is called that — I like to think it’s to annoy overly proud San Franciscans — and the provenance of the name “Junior” is just as much a mystery. As far as I know, there’s no mixed drink called “the Senior” though it would probably involve prune juice,  have a hard candy garnish and a reverse mortgage.

This Junior is a case of a drink that’s been around for probably more than a century and clearly hasn’t gotten its due — much like my favorite Junior, Sammy Davis. Easily one of the biggest all-around talents who was only rarely allowed to shine and a clear case where being junior very definitely didn’t preclude being completely superior to those who might be a little better known. Try this one.

Combine the ingredients in a cocktail shaker and shake like crazy for at least ten seconds and probably 15. Strain into a chilled cocktail glass and consider the arbitrary nature of success in our very unfair world.

The Junior is surprisingly refreshing considering the large amount of booze it contains. It’s also very beautifully balanced. The combination of fresh lime juice and bitters makes for a more complex and balanced drink and it definitely seems to work with most ryes. However, you do need to stick to rye. I tried it with bourbon and the added corny sweetness threw off the balance for me.

As for my choice of ryes, I started with Templeton, definitely in the running for my favorite rye on the market. Templeton’s smooth yet bold flavor worked wonders. Dickel Rye, another brand I’m quite taken with, was almost as good. As for Wild Turkey, a solid product that is, nevertheless, a bit harsh for my taste straight-up actually proved to be pretty much as glorious as the Templeton or perhaps even better, the astringent flavors playing counterpoint to the bittersweet and sour/fruity notes. This is a drink that rates buying at least a small bottle of Benedictine if you don’t already have that in your cabinet. Like too many greats in this world and the next, it has not been given the respect it deserves.