Trending
You are at:Home»Vices»Drink of the Week: The Mahjong Cocktail 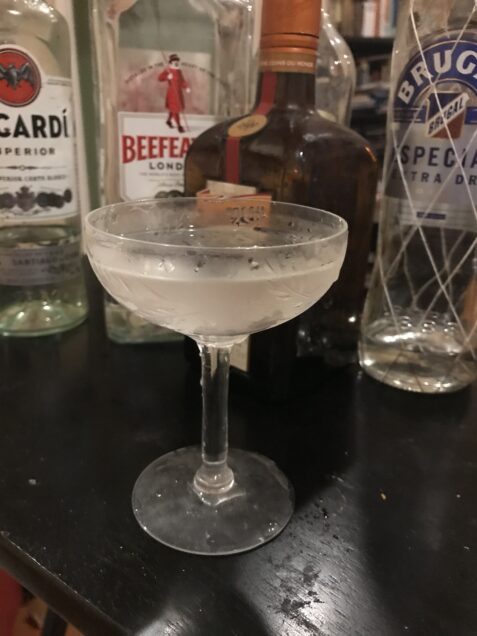 Chinese and Jewish-American culture may not seem to be all that similar but there are two quirky links that come up from time to time. One is the oft joked about Jewish-American love of Chinese-American restaurant food — most often noted these days as a Christmas tradition alongside a movie  — and other is the game of mahjong.

The game, often compared to gin rummy played with tiles, remains popular enough in China that its authoritarian government has bothered to crack down on it. (What’s the point of being authoritarian if you can’t try to ruin someone else’s fun every once in a while?) In the U.S., it’s a game that’s remained in the province of mature ladies of both Jewish and Chinese ancestry and has been featured in both 1993’s film version of Amy Tan’s “The Joy Luck Club” — in which a character roundly disses the Jewish version — and 2018’s Singapore-set “Crazy Rich Asians.”

There is a great deal of conjecture on exactly how and why this seemingly random Sino-Judaic connection began. I think it’s probably fair to say that mahjong wouldn’t have become a go-to game at Jewish resorts and retirement communities from the post-World War II era to today if it hadn’t been for a 1920s mahjong craze which we are told swept the nation like, yes, a virus. (Not that there’s anything wrong with that!)

The drink named for the game became popular enough that it appeared in 1930’s The Savoy Cocktail Book and numerous other classic cocktail books. So what, exactly is the connection between this particular very strong drink and the game? That’s even harder to answer than why both my parents were nuts for circa 1970 sweet and sour pork that tasted like a sno-cone.

Combine the ingredients in a cocktail shaker or glass and, if you want to be mixologically correct, stir it. Harry Craddock said, however, to shake it so you can consider going Ian Fleming/James Bond on this one and it’s not bad. Strain into a chilled cocktail glass and consider the connections between all of us humans that make us vulnerable to all kinds of viral entities both fun and deadly.

I would have tried more than one gin with this drink but, like I hope all of you are doing, I’m staying home and only going out shopping for essentials; as long as I’ve got at least a fifth of quality gin like Beefeater on hand, it’s something short of an emergency. I did try a few different rum brands I had on hand. The original recipe calls for Bacardi white rum which everyone seems to agree was a different animal back in the 1920s. Still, it worked just fine and using the higher end Brugel Extra Dry was only a very slight improvement. Using Bacardi Gold, which is only slightly sweeter in flavor, was also just fine and added a little color to the drink.

I will, however, counsel you against undue creativity with his drink. Appleton Estate Jamaican Rum — great stuff — was horrendous in the Mahjong. And, while Cointreau is usually the high-end alternative to triple sec Bols’ very decent triple sec made for a drink resembling rancid mouthwash. It’s Cointreau or no-treau, this time.

You can, however, mess around with proportions all you want. Using just 1 1/2 ounces and 1/2 ounce of the rum and Cointreau was sweeter, as you would expect, and more mellow though still very potent. Erik Ellestad of Savoy Stomp suggested 1/2 of 3/4 ounce of rum and Cointreau with 1 and 1/2 ounces of gin. It’s damn confusing if you’re making just one drink but did lead to the most drinkable version. Still, the most common recipe is 2 ounces of gin to 1/2 ounce of the sweeter ingredients. It might not be the best-tasting version but it’s potent enough for these nervous times.