Trending
You are at:Home»Vices»Drink of the Week: Satan’s Whiskers 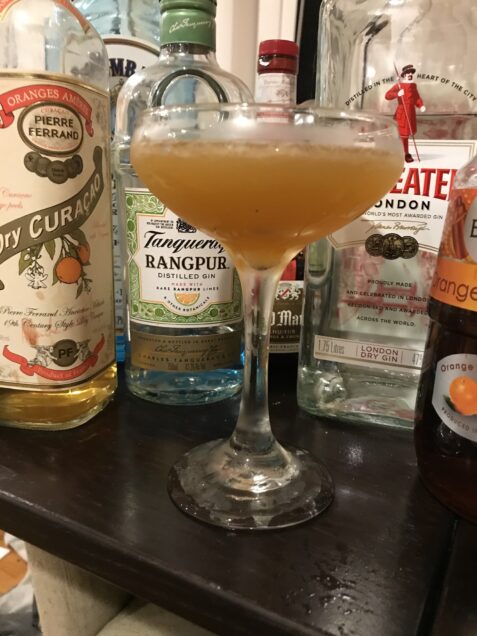 Unless you feel like getting drunk on Guinness and Irish whiskey at home, St. Patrick’s Day this year just isn’t happening, at least not if you’re smart and socially conscious…and so I feel less bad about not having one of my usual Irish whiskey cocktails this week. Instead, I have a drink with a name that feels appropriate for this point in history even more than for the Friday the 13th on which this post goes live, Satan’s Whiskers.

Such sources as Ted Haigh’s Vintage Spirits and Forgotten Cocktails don’t care to speculate about the provenance of the drink or its name but, being a man of this historical moment, I’m not going to let a little thing like complete lack of information stop me from suggesting where the name of this, first featured in The Savoy Cocktail Book back in 1930 but probably dating back further, comes from.

It’s a truism of cocktail history that a great many or even most of the early mixed drinks were initially consumed in the morning. People — well, men — were drinking so much in the 19th century that a fairly strong drink like the Corpse Reviver #2 was considered a “hair of the dog that bit you.” It’s easy to imagine how 19th-century folks, who were often taught that alcohol was an essentially evil substance, would think that the canine that bit them was actually more of a demon dog. So the whiskers of Satan would be an apt metaphor for a beverage like this, gentle and orangey but without being too strong and overbearing. If you’re going to day drink, this might not be the worst choice.

Combine the ingredients in a cocktail shaker with lots of ice and shake vigorously strain into a chilled and rather large cocktail glass. Sip and salute not the Prince of Darkness, but your favorite bartender who is probably a very nice person and not at all Satanic with or without a giant goatee.

Although many drinks offer alternative ingredients, Satan’s Whiskers makes a big deal of whether we use Grand Marnier or orange curacao. To make it with curacao means that your drink is “curled.” I suppose there might be some logic to that as curacao imparts a slightly sharper flavor but it really depends on the brand. I stuck with two of the best out there. Marie Brizard, which reliably produces standard cocktail liqueurs than its competitors without charging a whole lot more, and the more rarified Pierre Ferrand Dry Curacao. Both worked well though I have to say I prefer the latter. It is a hair less sweet, though it’s not dry in the way of a dry vermouth. Speaking of vermouths, I mostly stuck with Martini for both the dry and the sweet this time around though I also killed a bottle of sweet Carpano Antica using it and, as usual, it was an outstanding choice. My gins were Beefeater, Tanqueray Rangpur, and Bombay Sapphire.

The prize for by far the best Satan’s Whiskers iteration goes to the Saphirre in combination with the “straight” Grand Marnier. The stronger botanicals, without as much citrus as most other dry gins is a striking contrast with the orange flavors from everything else creating an unusually three-dimensional flavor profile that I found kind of trippy.