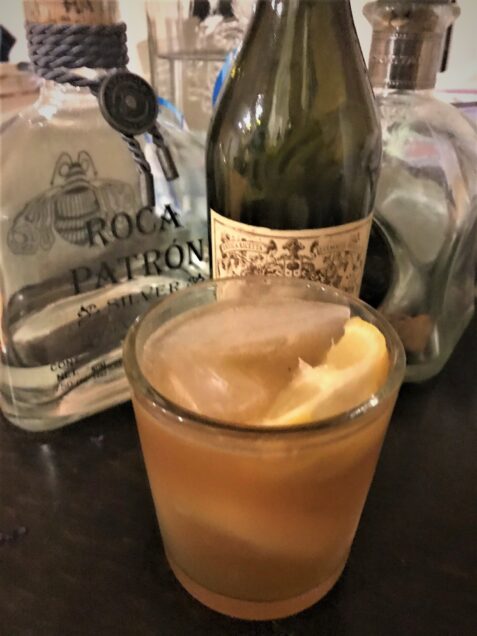 It is my belief that there are two pieces of  essential cocktail wisdom that everyone who takes a sip really should know.

In recent years, Carpano Antica has become the go-to higher-end sweet vermouth for the simple reason that it’s awesome. Rich with an edge that’s bitter yet somehow comfortable and just a touch chocolate-esque, it’s pretty wonderful if also pretty expensive and not neccessarily ideal for every sweet vermouth cocktail. I had opened a small bottle for last week’s drink and wanted to make the best use of this stuff that’s about double the price of the usual go-tos like Martini and Noilly Pratt.

And so I found the Carpano-rita in the pages of Food and Wine among two other sweet Carpano-centric recipes. It uses, somewhat unexpectedly, blanco tequila as its base spirit and it works. The writers suggest accurately that it tastes just a bit like a Margarita, and the good news is there’s no need for a salt rim!

Combine the ingredients in a cocktail shaker and shake vigorously. Strain into a cocktail glass with fresh ice. Stir a few times, add your garnish and drink the damn thing.

First thing’s first. Because I’m a stinker, I couldn’t resist trying this with two of Carpano’s competitors. Dolin’s is still on the higher end but only a few bucks cheaper and very nice stuff. Sadly, it completely disappeared and made for a drink that was just kind of sour and not much else. A few bucks cheaper still but with more of an edge to its flavor, good old reliable Martini tried it’s best to make an impact but it just couldn’t cut the mustard.

This drink was designed for Carpano and that’s just what you’re going to have to use. Thanks to the richness of a vermouth made by an outfit that claims to have invented vermouth back in the 18th century, the drink achieves a very nice balance between the tartness of the lemon juice and the flavor of agave.

Speaking of agave, my one modification to this recipe is that original somewhat confusedly calls for agave syrup, which it says is agave deiluted with an equal amount of warm water. The only problem with that is the stuff you buy at the store is already called agave syrup. Assuming that syrup was syrup was syrup I used the 1/4 ounces given in the original recipe the first time around and it was a bit sickly sweet. On later versions, I chose not to diluste the stuff and simply used about half as much, and the results were pretty awesome.

Your choice of tequila will make a difference. Don’t even think about altering the recipe with a reposada tequila because I tried that and it was medicinal tasting, at best. I used the last of my bottle of high-end silver Casa Noble vastly better effect and the flavor of the agave plant was very present in a way that tequila fanciers will very much enjoy. Roca Patron was somewhat milder but the tequila flavor still came through. Finally, the inexpensive but totally respectable Sauza Blue Silver was content to mostly remain in the background but that just let the that wonderful Carpano flavor become a bit stronger and there was nothing at all wrong with that.