Trending
You are at:Home»Vices»Drink of the Week: The Gaelic Flip 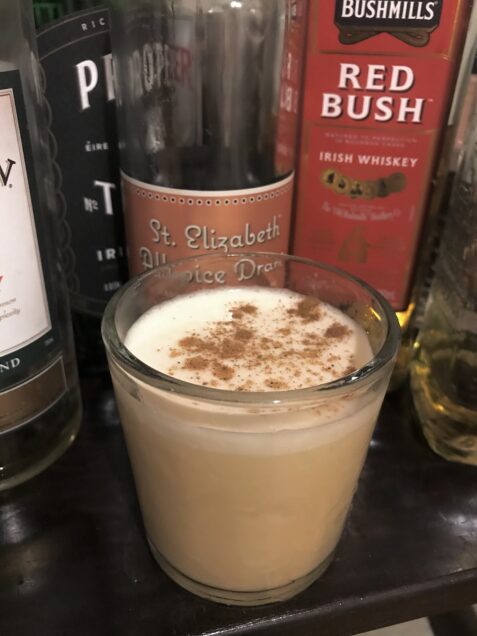 If you’ve been pouting and crying — and who can blame you these days — be aware that Santa and maybe your least favorite family members are coming to town this Tuesday and Wednesday. Even if you like all of the relatives you’ll be seeing, no disappointments of any sort are an issue, and nothing really freaky happens in the news, here’s a drink that’s still likely to lift your mood while delighting your tongue. It should also work well as well with your proverbial Aunt Minnie as it does with your neakbearded nephew or cousin, but don’t make it for them unless you feel like it.

Created by Chicago bartender Charles Joly, the Gaelic Flip comes to us via Liquor.com. If you’re not familiar with the flip genre of mixed drink, it is usually defined by containing a whole raw egg. If you’re grossed out by this, it’s probably because you haven’t yet knowingly encountoured eggs that are fully emulsified in other liquid. The result is not slimy or viscous in any way but milky. The confusing part is that some flips also contain heavy cream which not only makes them almost too rich and milky, it actually makes them eggnog! People insist on calling them flips most likely  to suggest you can have them some other time than the holidays.

I love a good nog but it’s a very heavy concoction with an over-the-top calorie count.  The extra seventy calories from the egg at least contains a fair amount of nutrition and will still leave some room for a second  shot of this drink, which I warn you can be addictive, or maybe one more Christmas cookie. Here’s my slightly amended version of Mr. Joly’s drink.

Combine everything but the spice garnish in a cocktail shaker and shake it without the ice to emulsify the egg. Add plenty of ice and shake as vigorously as you can for as long as you can. If possible, double strain the liquid into a chilled rocks or cocktail glass using both a cocktail strainer and a julep or food strainer to remove tiny ice chunks. Top with nutmeg and cinnamon or either if you have just one on hand. Sip and be just a little bit happy to be alive.

One thing I like about this drink is that, with one exception, all of the ingredients might be in the cabinet or fridge of even the most casual home bartender. The exception  is allspice liqueur, also often called allspice or pimento dram. This pimento is nothing like what’s stuffed into your cocktail olives — it’s actually the tree that produces those little red things — and the overall effect is that it tastes like Christmas; you’ll know what I mean after you’ve tasted it. I and nearly everyone else uses St. Elizabeth’s Allsprice Dram but there are one or two competitors out there. If you’re can’t find this tasty yet powerful liqueur near you or order it online, it sounds reasonably easy to make your own.

I stuck with Noilly Pratt for my sweet vermouth but my Irish whiskeys pretty much ran the gamut with not a stinker in the bunch. Bushmills is suggested in the original recipe, and it was just great but so was Concannon. (I blew all my remaining Jameson’s on my only failed iteration, where I screwed up, but I’m sure it’s just fine.)

My absolute best version of the drink contained Bushmills Red Bush, which is a little bit more challenging in flavor compared to the likable smoothness of regular Bushmills. I think it gave that version of the Gaelic Flip its edge. However, it’s also the one where I finally buckled down and double strained the drink. Believe it or not, getting rid of the ice crystals — which I often kind of like — really pushes this drink over the line from delicious to straight up ambroisial delight. If you want a boozier flavor, you can dial back the sugar by 1/3 from a tablespoon to two teaspoons.

Merry Christmas and Happy Hannukah to all my fellow fans of milkic delights.