Trending
You are at:Home»Vices»Drink of the Week: The Baron Cocktail 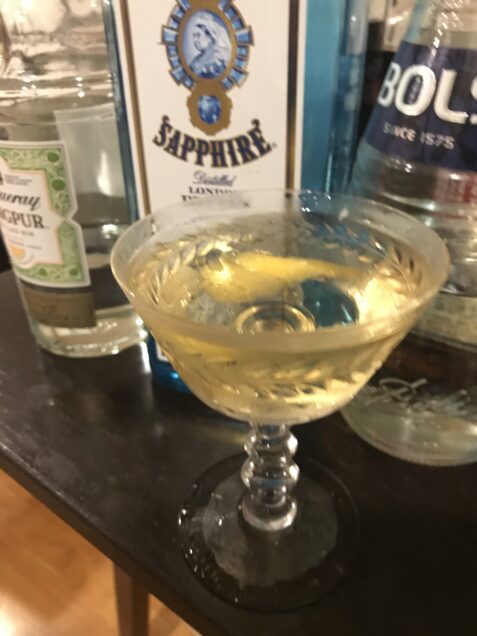 If you’re half the political junkie I am, you noted this mild quip from expert witness Pamela Karlan at the last week’s impeachment hearings.

“I’ll just give you one example that shows you the difference between [Trump] and a king, which is the Constitution says there can be no titles of nobility, so while the president can name his son Barron, he cannot make him a baron.”

This non-attack on a school-age boy set off a firestorm of outrage because someone who is not a Republican said it. Yes, there is the very reasonable unwritten rule that the children of politicians are supposed to be left out of the fray and Pamela Karlan apologized before her testimony was over. Of course, the criticism continued but it was well over and done by the time the President was attacking a 16-year-old environmental activist who had stolen his rightful spot as the Person of the Year at Time Magazine. Who does she think she is to try and make sure there’s a world for her to grow up in? A child of the President. Both sides!!!

Today’s drink is in no way in reference to any presidential progeny but is simply a drink with an aristocratic name I found and just happened to select for this week. It’s also good for any lingering frustrations you may feel over the endless fake outrage and false equivalencies. It’s a subtle and tasty twist on the sweeter martini-esque drinks that were once fairly common. Its original source is not well known. A  version of it is The Savoy Cocktail Book but the recipe I’m using comes from the vastly less revered Mr. Boston Cocktail Guide. I nevertheless think this is a drink fit for commoners and kings.

Combine the liquid ingredients in a mixing glass or cocktail shaker with lots of ice. Stir vigorously and strain into a chilled cocktail glass. Consider the possibility that, if we don’t pay close attention over the next several months, we’ll all be either barons or serfs pretty quickly.

The Baron is more accessible than a Martini but still a very mature quaff, even when you use less upscale ingredients. My gins were Gordon’s, Bombay Sapphire, and Tanqueray Rangpur. I mostly used Dolin’s vermouth, Martini Sweet Vermouth, and Bols triple sec. I think my second favorite of these versions contained the Rhangphur, which has a lot of citrus in its botanicals and that seemed to fuse with the triple sec beautifully. Still, Gordon’s — which some have alleged to be the vodka of gins — was also wonderful; it just let the other flavors play around a bit more. My non-cocktailian in-house guinea pig was also very much on board with every version I made of this one.

On my last at-bat, however, I switched up all the ingredients and had Beefeater — definitely halfway between the Gordon’s and the Rhangphur in terms of strong flavors — Martini dry vermouth, Noilly Pratt sweet vermouth, and I finally took the plunge with Cointreau. Freaking amazing. If I had another week I would have started in on various curacao’s, but the merry-go-round has to stop sometime.