Trending
You are at:Home»Vices»Drink of the Week: Architects and Kings 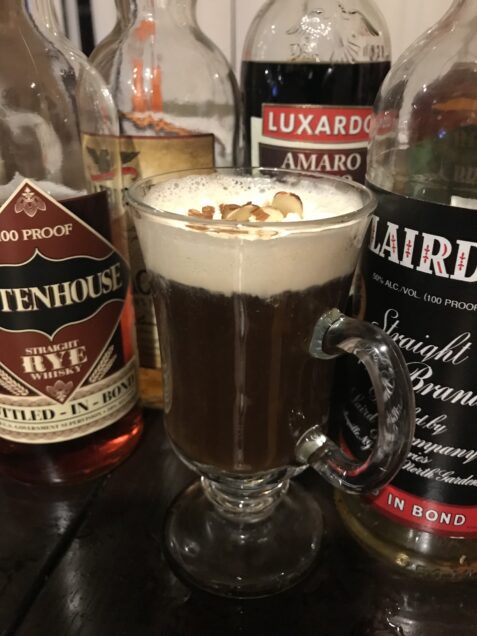 Thanksgiving is coming and what could be better at the end of a feast than a really good after-dinner coffee drink? If you’re like me and prone to gluttony, you’ve probably experienced the feeling that, after all that turkey and mashed potatoes, what you’d really like is a little more turkey and mashed potatoes. At that point, a little hot coffee is just the thing to remind your body that, at last, dinner is finally over — at least once you’ve had some pie. Moreover, a little alcohol is the best antidote to any post-prandial anhedonia you may be feeling after you realize that half your relatives have disappeared from your life since 2016, for some reason. This one also has a digestif in it and, while I have no idea how digestifs are supposed to help you digest food or “cut the fat” or what have you, it sounds like it might be helpful.

Today’s drink comes to us from Serious Eats and was created by Chicago star-bartender Josh Relkin, who I gather knows his way around the full-bodied boozes. Along with two of my very favorite base spirits, rye whiskey and apple brandy, he throws in an amaro — a type of bittersweet digestif/liqueur that is being included in more and more mixed drinks these days, though amaros have never been a stranger to cocktails. (Campari, Fernet Branca, and Cynar, for example, are all members of the amaro family.) My turkey day suggestion has pretty much everything you’d ever want in an after-dinner brew, — even if the name sounds like an RPG for post-doctoral students.

Make the rich (double sweetness) syrup by combining half a cup of water with a full cup of demerara sugar and heating/stirring it until the large sugar crystals are fully dissolved. Put it in a container and chill. Re: demerara sugar. It’s a type of less refined sugar popular as a sweetener for classic cocktails that is getting easier to find — I happened to spot a bag made by C&H at a local Ralphs/Kroger. I probably should have bought several. Turbinado or raw sugar is pretty similar in flavor and should probably do just as well.

Next, combine the booze and sweetener and heat, either in a saucepan or by sticking in a microwave for about thirty seconds. It should be very hot but don’t boil it. (I’m not sure what it would do to the taste, but it might very, very, very slightly reduce the amount of alcohol, and we can’t have that!)

Then, combine that with the hot coffee in a cup that has been heated with hot water beforehand. (Important note: don’t forget to dump the hot water. It gets o messy and you feel sooo stupid.) . Add the whipped cream, the almonds if you want. Now it’s ready. Be sure to sip through the cream; stirring to mix the cream in will result in precisely 75.8% less pleasure. Don’t do it!!

The original recipe for Architects and Kings is entirely brand-specific. Along with the delightfully coffee-esque Amaro Abano from Luxardo, it specifies Rittenhouse for the rye and Laird’s Straight Apple Brandy. It’s worth noting that both of these spirits are bottled in bond which primarily means that the damn government has certified that they are not adulterated, pretty darn decent, and 100 proof.

Because doing coffee cocktails kind of messes with my usual schedule — usually making these drinks is something I do just before dinner and then bed — I was only able to make Architects and Kings three times. Otherwise, I could probably have fun with it for two weeks straight without getting tired of it, though I’d also gain five pounds in the process.

Moving on, Iteration #1 was a complete brand match with Josh Belkin’s recipe. It was easy since both Rittenhouse and Laird’s are frequent default spirits for my drinks and so were on hand. As my interest in amaros continues to grow, I sprang for the Abano, which has a nice, somewhat spicy, coffee-esque flavor. As for the coffee, II used some Peet’s French roast. That was very nice, though the booze and amaro flavors were surprisingly forward while the Peet’s played a surprising supporting role. I used Kroger’s Private Selection Heavy Cream out of the can on all of the versions because I believe in convenience.

Second time around, I went with Dickel Rye and Laird’s Straight Applejack 86 a solid and less expensive product. Importantly, I decided to try another favorite of coffee of mine, the Veranda light roast coffee from <please don’t hiss!> Starbucks. I wasn’t prepared for the difference. For whatever reason, the presumably lighter flavor created a much more coffee forward cocktail that I and my in-house guinea pig agreed was a knock-out. I’d put it up against the best Irish coffee’s I’ve had or, really, any coffee drink I’ve had.  (Starbucks haters take note, I agree that Peet’s is generally better — but not all the time and are you old enough to remember what American coffee was like pre-Starbucks? No, I didn’t think so.)

Finally, I wanted to see if another amaro would work in the drink, so I tried with another very good but more widely used product, Ramazotti. It wasn’t as awesome as the Abano, but it was still a drink I’d be thankful for after any heavy meal. A bit of an anticlimax, I guess, but the aftermath of a holiday always is.