Trending
You are at:Home»Vices»Drink of the Week: The Kentucky Sidecar 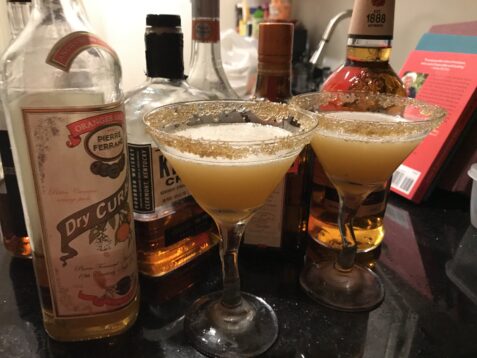 People who know my political predilections won’t be surprised that an item from last week’s news made me feel more warmly towards the State of Kentucky. Sure, it’s reputation is such that people put “tucky” as the second syllable of any place they consider backward, such as renaming the San Bernardino County exurb Fontana as “Fontucky” or describing the non-urban portions of Pennsylvania as “Pensyltucky.” But, hey, I love “Justified” and often secretly crave the Colonel’s original recipe with its 11 herbs and spices. Naturally, I couldn’t be a self-respecting cocktail blogger and not love Kentucky bourbon and it really does look like a beautiful state if you ignore, well, you know. I probably don’t need to add that the closest I’ve been to Kentucky is Bloomington, Indiana…for about 24 hours.

In regards to today’s drink, replacing the cognac/brandy in a traditional Sidecar isn’t a very great leap to make from one drink to another, but I think it’s enough. The flavor profiles of both base spirits include a certain level of woody, aged flavors and sweetness — but bourbon offers a more rounded and more boldly sweet flavor.

I’m dedicating this one to an online friend, a writer of some genuine note who appreciates a good whiskey but who unaccountably loathes Mint Juleps. He recently moved back to the Bluegrass State and therefore gets all of the credit for the surprise victory of sanity. He doesn’t like just anything, but maybe he’ll prefer this one.

Combine the liquid ingredients in a cocktail shaker with plenty of ice. Shake very vigorously and strain into a glass that has been chilled and rimmed with sugar.

About that rim. If you’ve done the salt rim on a Margarita — a close relative of a Sidecar — you’ve performed the same operation. Just wet the edge of the glass with the lemon you just juiced or a little water and place the rim of the glass in a plate full of sugar and spin it around some. Superfine sticks nicely, but pretty much any type of sugar should work. I used fancy old-school demerara sugar in the drink above, which is both tasty and photogenic — that is if you have a neater hand than I do.

I really love the Kentucky Sidecar. It gets better when you use higher-end ingredients, but it’s never less than very good and, at it’s best, can be a revelation as sweet and sour citrus notes blend with whatever roughhewn flavors emerge from your bourbons. Higher-end orange liqueurs can also bring a welcome trace of bitterness to the beverage.

Speaking of orange liqueurs, I stuck to the triple sec and curacao varieties. My value triple sec was from Bols while my fancier selection was the usual choice, Cointreau, which I think really produced the most outstanding results. I haven’t always been a Cointreau fan, so this was a welcome surprise. My starter curacao was from Marie Brizzard, which is reliably a cut-above the other mass-market lower-shelf liqueurs. I definitely preferred the higher end curacaos, Grand Marnier and Pierre Ferrand Dry, however. I think my in-house guinea pig — who was almost as much a Kentucky Sidecar fan as I — liked the drinks with the sweeter and cheaper liqueurs.

As for the bourbons, my favorite was the highest end/highest proof choice, Knob Creek, which brought a more multifaceted flavor to the mix. Also outstanding was Four Roses, which California stories are selling at quite reasonable prices these days. Even less expensive and reliably decent — but maybe a little sweet for mytaste, was Evan Williams. It’s probably the popular choice in Kentucky as well as Fontucky and Pennsyltucky.