Trending
You are at:Home»Vices»Drink of the Week: The Brooklyn Cocktail 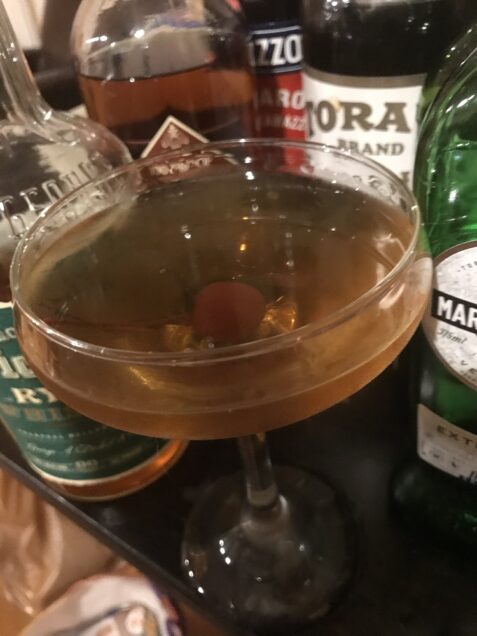 Way, way back in 2012, I covered what I thought was a variation on the classic Brooklyn Cocktail promulgated by Canadian Club to promote a new expression. Turns out, however, that the recipe was actually closer to the very first version of this drink than today’s better-known recipe.

Trust cocktail superman-savant David Wondrich to let us know that the original cocktail was featured in a 1908 book by New Jersey bartender Jack Grohusko using a brand of sweet vermouth and in proportions similar to that 2012 drink. It seems that somewhere on the way to 1930 and The Savoy Cocktail Book, where most people learned of the Brooklyn, the sweet vermouth — then called Italian vermouth — got switched out for dry vermouth — then called French and the amount of whiskey got doubled. Mr.Wondrich expresses a preference for the original version but I think it might qualify as a completely different drink and I quite like this one.

Combine all of the liquid ingredients in a mixing glass or cocktail shaker with a lot of ice. Stir vigorously for a longish time — I wouldn’t recommend shaking this one but then again I couldn’t bring myself to try it that way. Strain into a chilled cocktail glass. Add the garnish and prepare for an accessible but very adult beverage.

As befits a classic of the cocktail golden era, the Brooklyn is a serious beverage that is nevertheless smooth and sweet enough that you don’t have to be mixed-drink madman like me to love it. It’s a boozy mofo to be sure, especially if you go for a 100 proof rye, of which there are many.

And now for the parade of brand names! With so many good brands of rye and so many great amaros and amaro like products on the market, it was hard not to go a little crazy on the Brooklyn Cocktail. This recipe usually calls for Amer Picon, a bittersweet drink which, for all intents and purposes doesn’t really exist anymore. (There’s a European beverage with that name, but experts say it’s a very different beverage today.) I used the standard substitute, Torani Amer.

The bad news is that, If you don’t live in within range of a BevMo or (better yet) a Total Wine & More booze big box, you might have a hard time finding Torani Amer without going mail order, but you can also use any number of bittersweet amaros which might be easier to find nationwide like Ramazotti or Amaro CiaCiara or you can experiment (I didn’t have time) with dark, multiflavored brews like Cynar or Punt e Mes. I stuck mainly with the Torani and occasionally switched it out for Ramazotti. As often happens, while the Ramazotti is much more drinkable on its own, the Torani mostly produced more desirable results in conjunction with my two sweet maraschinos, Luxardo and Maraska.

For the dry vermouth, I switched between Dolin and Martini. The dryness and relative simplicity of the inexpensive Martini turned out to be somewhat more amenable to my taste. However, my in-house guinea pig seemed to prefer the busier Dolin’s iterations.

As for the rye or ryeish whiskey, I used Jim Beam, Dickel, Rittenhouse, and Canadian Club (which can legally be called rye in Canada). They all worked in outstanding fashion but I have to hand it to the cheap-but-decent stuff. Jim Beam provided plenty of fight for a nicely balanced drink while the mildness of Canadian Club let the other ingredients share the spotlight and produced a harmonious blend that I loved