Trending
You are at:Home»Vices»Drink of the Week: Eyes Without a Face 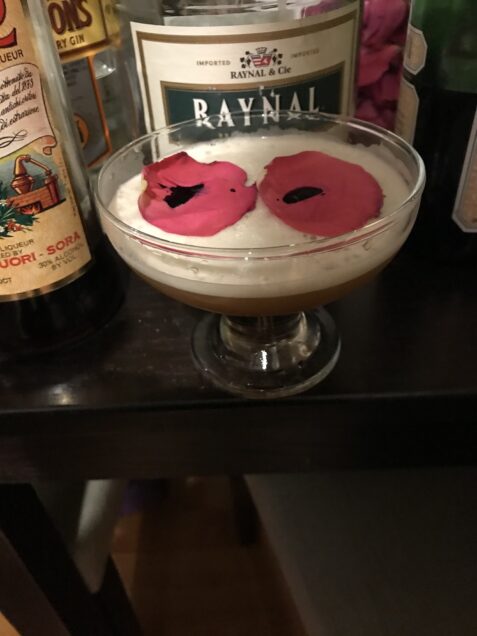 There are films I’ve seen three, four, maybe five times I can barelly remember. There are also ones, I’ve seen once, was moved by, and never dared watch again.

I meant to rewatch George Franju’s deeply emotional masterpiece of horror, “Eyes Without a Face” for this drink and blog-post. Really. Yet, when I was unable to find the Criterion blu-ray I swear I bought a few years back, I was relieved. And suddenly it was too late in the week to watch it via Amazon. Oh, well, I guess I’ll have to talk about it from memory. Happy Halloween.

It’s hard to believe now but, thanks to its association with the then very disreputable horror field and undiscovered by the genre loving likes of Francois Truffaut and  Jean-Luc Godard in their film-critic days, “Eyes Without a Face” was treated as a major step-down for director Georges Franju. Today, it’s almost all he’s known for.

Franju worked on the script with three other writers adapting a novel by Jean Redon. Those three included the team of Pierre Boileau and Thomas Narcejac, best known for writing the source material of two of the most revered film thrillers of all time, “Les Diaboliques” and “Vertigo.” It’s often called a dark fairy tale, and it is, but like the ones without handsome princes or fairy godmothers. And, yes, it really did inspire the Billy Idol song, which might be the most terrifying thing about it.

“Eyes Without a Face” is also the first of a very small subgenre of scary movies about plastic surgery. It  tells the story of Christianne, the once beautiful daughter of a surgeon who has devoted himself to restoring her face after causing her to be badly disfigured in a car accident. The deeply dysfunctional doctor dad ends up performing the world’s first face transplants. This being a horror film, the doctor doesn’t wait around for suitable donors to just die on their own. Once a donor is secured the hard way, there’s a surgery scene which we’re told caused walkouts and fainting spells when it was first screened in 1960. I’m sure many stayed but closed their eyes, I stared at the floor of the New Beverly Cinema throughout the sequence, listening to the nervous twitters and uncomfortable shifting of some members of the audience. I hadn’t done that since the time they showed the infamous “Red Asphalt” in my high school health class.

The  balance of the movie that I did look at  was extraordinary. It’s beautiful but what stays with you is its compassion. Franju was ahead of his time in his concern with animal welfare — his second best known film now is a documentary film exploring a slaughterhouse — and what happens to the heroine is paralleled by her father’s heartless experiments on dogs. “Eyes Without a Facie” is as compassionate as it is creepy but, most of all, it is beautifully sad. Franju’s masterpiece is exemplified by the alabaster mask that substitutes for a face, as evocative as any prop has ever been.

My cocktail homage involves props of a sort. I went with an obvious trick to create those creepy faceless eyes. I strove to create a drink that was as bitter as it was sweet, but it wound up being a bit tangy also. I basically stole the recipe for an Amaro Sour and fortified it with some Francophile touches.

Eyes Without a Face

Combine all of the ingredients, except the garnish stuff, in a cocktail shaker. Dry shake without ice to properly emulsify the egg white. Add ice and shake vigorously. Strain into a chilled, large cocktail glass. Wait a moment for the foam to form. Place the rose petals in the drink and add the blue food coloring to turn the petals into scary, faceless eyes. Contemplate just where it is that beauty and terror meet.

The thought process behind Eyes Without a Face, the mixed drink, was simple. Amaros are very much the creepy cult films of cocktail ingredients. Lots of flavors in there that really shouldn’t blend, but somehow they do. I’ve been doing pretty much nothing but sours and fizzes lately so I still have lots of egg white left. And it just made sense to switch out the whiskey in an amaro sour for cognac or a less expensive French brandy. With the sweetener it all came together much easier than I had any right to expect.

The drink worked very nicely with either more or less sweetener, so your leanings toward sweet or more sour flavors should call the shots. I selected Amaro CioCiara because I had it on hand and it’s flavor is much mellower than the more cough syrupy Mellitti I also had around. I’m sure lots of other similar bittersweet beverages could work. However, one Amaro I wouldn’t suggest basing this drink on is Fernet Branca. I threw in a small amount to add a touch more seriousness to the drink but that infamously rich and harsh “bartenders’ handshake” is best reserved for cameo roles.

For my base spirit I used Hennessy Cognac and Reynal, a brand which has offices in France’s Cognac region so…close. It’s good stuff regardless, and at a good price. The Hennesy is a bit drier and tougher, so it’s arguably a slighly better choice, but I wouldn’t argue it too hard. There’s a lot of flavors vying for the drinker’s attention on this one.

And now a little more about our film selection. Happy Halloween.