Trending
You are at:Home»Vices»Drink of the Week: The Gimrickey Fizz 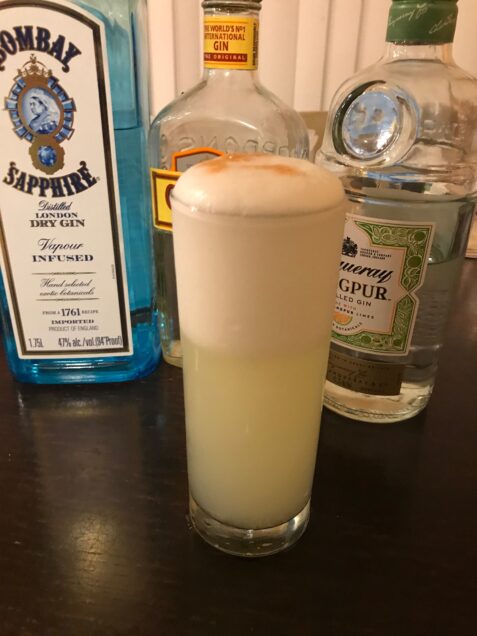 So, the Gimlet is a combination of gin and sweetened lime juice. The Gin Rickey, on the other hand, is gin, lime juice, no sweetener (usually) and soda water. I added egg white and a Pisco Sour-style bitters garnish to the Gimlet Eye. When I found myself with a lot of limes and a desire to keep my series of classic fizzes with egg white going throughout September, the logical step was to add soda to the prior egg white and sweetened lime juice combos. Since I can’t find anything much like this drink anywhere, I’ve decided to take ownership and christen this week’s drink The Gimrickey Fizz.

This drink is so good and so simple that, aside from the inclusion of bitters, I can’t possibly believe that hundreds of thousands of ice-cold glasses this wondrous fizz haven’t been imbibed somewhere, some time. Yes, I know that fizzes are a bizarrely neglected category, but still. However, since I can’t find any record of any one making a drink too much like this one via Google, you’ll just have to thank me for coming up with it.

Combine all the ingredients except the soda water and bitters in a shaker with no ice. Shake it “dry” to emulsify the egg white. Add lots of ice and shake it again until you can longer shake, and strain it into a chilled highball glass. Top off with chilled soda water. Wait a minute or two for a milky head to form on the top of the beverage. Finally, add a few drops of bitters to the foam. Extra points if you make it pretty. Minus points if you did it like I did in this week’s photo.

Honestly, this drink was fabulous with all three of my dry gin selections this week. The best was probably the Bombay Sapphire version. The stronger juniper flavor was a nice back drop for the tart sweetness of the lime and simple syrup combo. Tanqueray Rangpur’s citrus notes emphasized the sour flavors in a way I really didn’t mind at all. And Gordon’s does what Gordon’s does, which is to add just a hint of something that isn’t vodka and get the hell out of the way. It was great, too.

Finally, while I would suggest Angostura or a similar sort of aromatic bitter for your garnish, it’s also fine to experiment. I wasn’t in love with Fee Brothers Aztec Chocalate Bitters as a topping, but it didn’t really get in the way that much either.