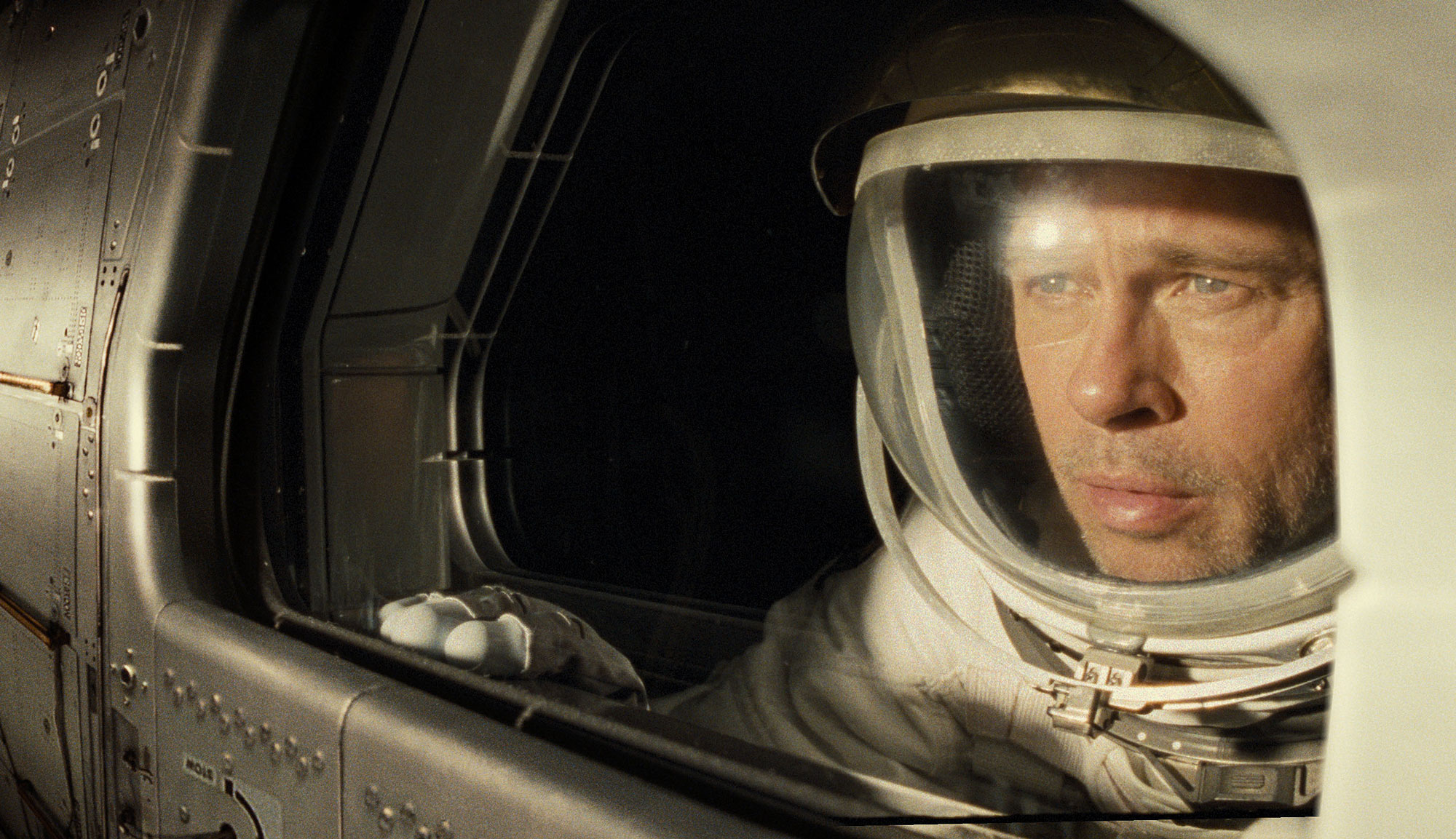 We’re deathly afraid of that stabbing word “pretentious,” the word that students use to curse each other’s ambition. It’s a young person’s word, a shortcut-to-thinking word. I’m a big fan of pretension. It means “an aspiration or intention that may or may not reach fulfillment.” It doesn’t mean failing upward. It means trying to exceed your grasp. Which is how things grow. – Warren Ellis

“Ad Astra,” the new film directed and co-written by James Gray (“The Lost City of Z,” “We Own the Night“), is not for everyone. In fact, days after seeing it, I still don’t know if it’s for me. It’s a gorgeous movie that uses space race tech and ‘70s arthouse visuals to create a blatant retelling of Joseph Conrad’s 1899 novella, “Heart of Darkness,” albeit with a lot of the subtext elevated to simply text. This science fiction story pulls from all manner of influences – “Blade Runner,” “Apocalypse Now,” 50s pulp sci-fi, Andrei Tarkovsky’s “Solaris,” the works of Stanislaw Lem and Alejandro Jodorowsky, “2001: A Space Odyssey” and more – in its design, storytelling and artistic touches but ends up becoming a singular work of its own.

The movie tosses out bad sci-fi gizmo language, both adheres to and disregards actual physics and science depending on the moment, employs great visual effects and has some groanworthy film school dialogue all within its episodic tale of an emotionally distant man journeying to the stars, possibly in pursuit of the absentee father who has cast a large shadow over his whole life. It’s obvious, slow and odd, and only the thinnest of veils separates the literal narrative action from the deeper metaphor, yet it is incredibly bewitching and fascinating. “Ad Astra” won’t be for most people, and even its staunchest defenders will have to cop to some flaws, but it does feel utterly unique and wholly sincere, and that makes it deserving of recognition and attention.

Roy McBride (Brad Pitt) is a major in the United States Space Command with an impressively stable heart rate despite a failing marriage and a calamity on his hands as electrical surges are wreaking havoc across the solar system, trashing interplanetary space stations and observation labs. Space Command tasks Roy with finding the cause of these surges, which they believe originate with Roy’s long-lost (thought to be dead) father, Clifford (Tommy Lee Jones), out beyond the outer rims of explored space. A journey begins from Earth to the Moon and Mars, and many points in between, as Roy seeks out a man who has been absent from his world but whose legacy is omnipresent in his life.

I hadn’t seen a trailer for “Ad Astra” before watching the film for review; it wasn’t on purpose, but I realized as I sat down for the screening that I only knew that it featured space, starred Brad Pitt and came from the director of “The Lost City of Z” (a movie more people should see and/or talk about). I had no preconceived notions about what type of story it would be, and that may have been for the best. It’s hard to picture audiences who balked at the more emotional and metaphorical elements of films like “Interstellar,” Steven Soderbergh’s “Solaris” or “The Fountain” flocking to see this movie and enjoying a mostly quiet and deliberately paced (though never boring) character study of a man unraveling as he gets closer to confronting his creator.

Gray’s film (co-written with Ethan Gross) is sophomoric, pretentious and feels born out of an alternate universe where the sci-fi genre continued without “Star Wars” in 1977. But even though it’s supremely obvious what is going on (the stoicism of Roy melts with each leg of the journey as he seeks out the man who made him), there are still layers wrestling with existentialism, the weight of one’s legacy and religious questions, among others. “Ad Astra” is without guile but not without grace; its ability to be upfront about exactly what’s happening, even buried among fetishized tech and pulp lingo, is fairly impressive.

The movie succeeds thanks to a great performance by Pitt, who plays the role as a clenched fist that’s trying its best to remain stable. His detached narration is akin to those found in the original theatrical versions of “Apocalypse Now” and “Blade Runner” – ponderous yet a bit removed from any sort of animated expression. Roy never comes across as lifeless but rather as a person held in permanent check by his need for control. Also of note are the fantastic visuals created by production designer Kevin Thompson and cinematographer Hoyte van Hoytema (“Dunkirk,” “Her“), which establish beautifully desolate areas, modern touches in shambling interplanetary spaces and exceptional use of color and odd layouts that nod to previous cinematic efforts while also detailing the crumbling of Roy’s defenses. Lastly, Max Richter’s score is phenomenal and evokes an ethereal quality of inducing mood that powers so much of the growing intensity of emotions onscreen.

“Ad Astra” is a film of contrasts: giant cosmic spaces reduced to the relationship between a father and son; spotlighting technical elements of space travel as a cover for the unraveling emotions that hide beneath the checklists; and episodic moments of action and adventure that are slowly doled out amid the real action that lies within the plainspoken confessions of its protagonist. These juxtapositions are abundant throughout Gray’s movie, at once warring with each other but also complementary. There are elements of the story, lines of dialogue and even some imagery that is so on the nose that it’s mildly annoying, but all of those exceptions feel less like sloppy executions and more like a sincere attempt to communicate a deeper meaning and wrestle with genuine emotional concerns. “Ad Astra” will most likely be found boring by many and pretentious by some, but its ambition is deserving of attention and accolades as it dares to reach to the stars to tell an incredibly human story.